Purpose: ODTs dissolve rapidly in contact with saliva, which eliminates the need to chew or swallow the tablet, thus improving the patient compliance specially for pediatric and geriatric populations who have swallowing difficulties. Coenzyme Q10 (CoQ10) is an effective antioxidant with a fundamental role in cellular bioenergetics and numerous known health benefits. Many marketed CoQ10 products are dosages in capsules which are hard to swallow for some elderly populations. One marketed CoQ10 ODT product tastes sandy in the mouth. There is a need to develop a CoQ10 ODT with superfast disintegration time and good mouth feeling. Ludiflash® is a direct compressible excipient designed for ODT and Kollidon® CL-SF is a water-insoluble crospovidone disintegrant with strong disintegration capability. In this study, we reported a CoQ10 ODT formulation with shorter disintegration time and better mouth feeling compared to the current commercial CoQ10 product.


Methods: To improve the distribution uniformity of CoQ10, it was initially blended with Kollidon® CL-SF for 20 min. Kollidon® CL-SF has a unique function to disperse the agglomerated powders and improve the flowability. Then Orange Flavor Nature, Sucralose, Ludiflash® and Aerosil® 200 were added and the mixture was blended for 40 min. Lastly Mg Stearate was added and blended for 2 min. ODTs with a weight of 500 mg/tab were compressed on a Korsch XL 100 tableting machine using 12 mm punches (compound cup profile). The formulation is listed in Table 1. Tablet hardness was tested on a HT-300 tester (Key International Inc.). Friability was tested using a Vankel Vanderkamp Friabilator, Model 10801. Disintegration time was tested using water as the medium.


Results: By using suitable sized and shaped tableting tools, we prepared the same weight and shape ODTs as the commercial product where the strength of CoQ10 is 80 mg. Figure 1 compares the pictures of Ludiflash® ODT and the commercial ODT. A significant number of yellow dots are observed on the commercial tablet surface, which may be caused by insufficient blending. In this study, we used Kollidon® CL-SF to disperse CoQ10 first and then blend with other ingredients. In this way CoQ10 aggregates were well dispersed and distributed.

Kollidon® CL-SF functions not only as the disintegrant, but also as a binder for direct compression. Increasing the levels of Kollidon® CL-SF results in a harder ODT. For example, using 10% and 15% Kollidon® CL-SF in the formulation provides ODTs with hardness of 89N and 95N, respectively, at the compression force of 10kN.

Panel in-vivo test shows that Ludiflash® CoQ10 ODT has a smooth and pleasant fatty/creamy mouth feel without any grittiness while the commercial ODT is very sandy. Ludiflash® CoQ10 ODT dissolved quickly and was easy to swallow. However, the market commercial product was gritty and scratchy on the tongue, mouth and throat, and stayed for a long time afterwards.


Conclusion: Ludiflash® CoQ10 ODTs showed comparable size, weight, shape, and strength, but better hardness and friability compared to the commercial ODT. The ODT properties can be easily tailored by changing the formulation and process parameters. The disintegration time of the Ludiflash® ODTs was shorter, matching the FDA guidance. The mouth feeling of the Ludiflash® ODT was also much better than that of the commercial ODT. Kollidon® CL-SF not only acts as an excellent ODT super-disintegrant with a creamy mouth feel, but also helps in uniformly dispersing colored ingredients in a tablet, preventing from forming a speckled tablet surface. 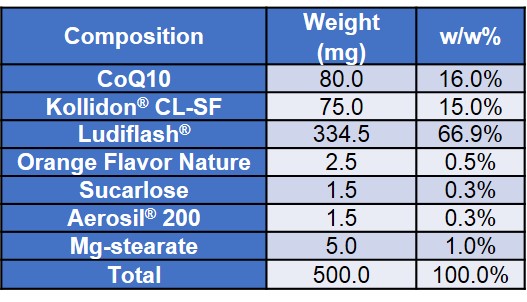