Purpose: Non-steroid anti-inflammatory drugs (NSAIDs), such as etofenamate and diclofenac sodium, are among the most prescribed drugs in topical formulations used for their analgesic, anti-rheumatic, and anti-inflammatory properties. However, drugs must overcome the skin due to its role as a physical and chemical barrier against the penetration of chemicals and microorganisms. This is why human skin has been widely used as a model for studying in vitro diffusion of transdermal and topical formulations. However, human skin suffers from high biological variabilities such as the thickness of the skin, lipid content, and lipid composition. Also, human skin is limited by its availability, high cost, and sensitivity to storage conditions. Recently, Strat-MTM membrane (Merck Millipore, USA) was introduced as a synthetic membrane for in vitro diffusion studies as a substitute for human skin. This synthetic membrane is characterized by its low batch-to-batch variability, safety, and lack of storage limitations, thus providing more consistent data. Besides, it has been shown that the diffusion data of Strat-MTM membrane correlate well with those of human skin. Thus, it has the potential to be used as a screening tool for evaluating topical/transdermal formulations through the human cadaver skin. The objective of this study was to optimize the in vitro permeation test (IVPT) conditions for evaluating the delivery of etofenamate and diclofenac sodium from commercial formulations across Strat-MTM membrane using Plackett-Burman factorial design.


Methods: The present study was focused on exploiting Plackett–Burman screening design to screen the effect of seven factors – isopropanol concentration (10 vs. 40%), temperature (32 vs. 37ºC), rotation speed (600 vs. 1000 rpm), medium pH (5.8 vs 7.4), medium degassing (not degassed vs. degassed), stirring while sampling (unstirred vs. stirred), replacement medium volume (1 vs. 2 mL) on the permeation rate (flux) of diclofenac sodium (DNa) and etofenamate (ETF) from reference formulations, i.e., Voltaren Emulgel® 10 mg/g and Traumon® gel 100 mg/g, respectively. The experiments were carried out according to a seven-factor 8-run statistical model with one additional center point and subjected to a 12-h in vitro permeation test using an automated vertical diffusion cells (VDCs) system (Vision® MicroetteTM automated test system, Hanson Research, Inc., USA). Standard VDCs (USP < 1724 > VDC model A) with a donor area of 1.767cm2 and a receptor volume of 7.0mL were used with dosage wafers for the Strat-MTM membranes. The Strat-MTM membrane was occluded in the Franz cells with glass discs. In each run, three units (n=3) of each product were examined. At the end of 12h, all receptor samples were analyzed using a validated UHPLC method and Nexera-i LC-2040C 3D Plus (Shimadzu Co., Japan) coupled with Phenomenex Luna Omega Polar® 1.6µm C18 100Å column 50×2.1mm and photodiode array detector (PDA).


Results: Received permeation profiles were described using linear regression equations (AQ/P = a√t + b) with the slope (a) of the regression line representing the rate of permeation process. Next, the ratios of each Traumon® gel sample slope to each Voltaren Emulgel® sample slope (ETF/DNa flux ratios) were calculated. Obtained data were subjected to statistical analysis using Minitab® 18.1 software (Minitab, Inc., USA) to analyze screening design. The significance of the model was indicated by the ANOVA (Figure 1) and the residual analysis. Isopropanol concentration, medium degassing, stirring speed, temperature and medium pH had a significant effect (p< 0.001, α=0.05) on the ETF/DNa flux ratios (Figure 2). The influence of isopropanol concentration in the medium was most profound. An increase in alcohol concentration increased the rate and extent of ETF permeation, due to high solubilization power of the receptor fluid (diffusional sink conditions are maintained allowing sufficient drug permeation over a substantial time period), as well as it increased discriminating power of the IVPT. Medium outgassing decrease ETF/DNa flux ratios probably due to isopropanol content reduction during ultrasounds and vacuum filtration treatment. Similarly, an increase in stirring speed decrease the discriminative power of the test. However, increasing the medium temperature and pH resulted in higher values of ETF/DNa flux ratios.


Conclusion: The results of this study illustrate how to efficiently optimize key study parameters during IVPT method development, in order to identify conditions for a sensitive and discriminating IVPT study that can appropriately characterize NSAIDs formulations. This study proved that Plackett-Burman design was an efficient tool to recognize the independent factors affecting the response variables and to identify the most significant factors. Based on the results obtained in the set of experiments, the following test parameters were regarded as being applicable for obtaining discriminative in vitro permeation proﬁles through STRAT-MTM membranes from semi-solid NSAIDs formulations for cutaneous application: not degassed mixture of 40% v/v isopropanol and 60 % v/v PBS pH 7.4 as receptor fluid, 37°C, a magnetic stirring bar with helix stirrer driven at 600 rpm. These test parameters were thus applied to test marketed NSAIDs formulations. 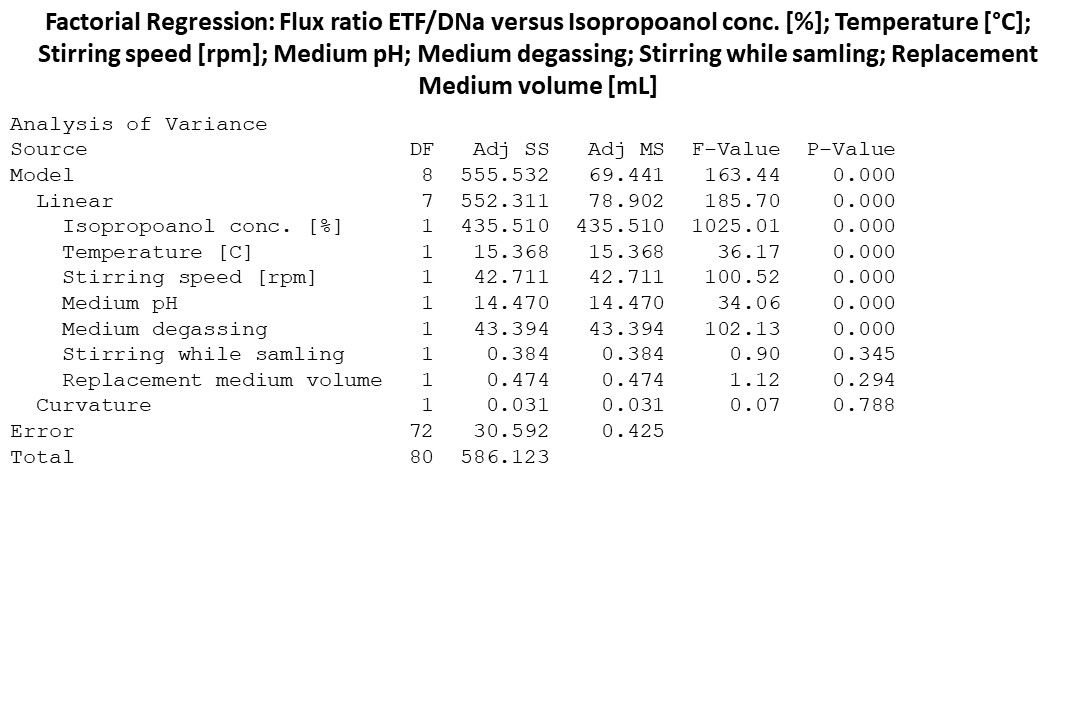 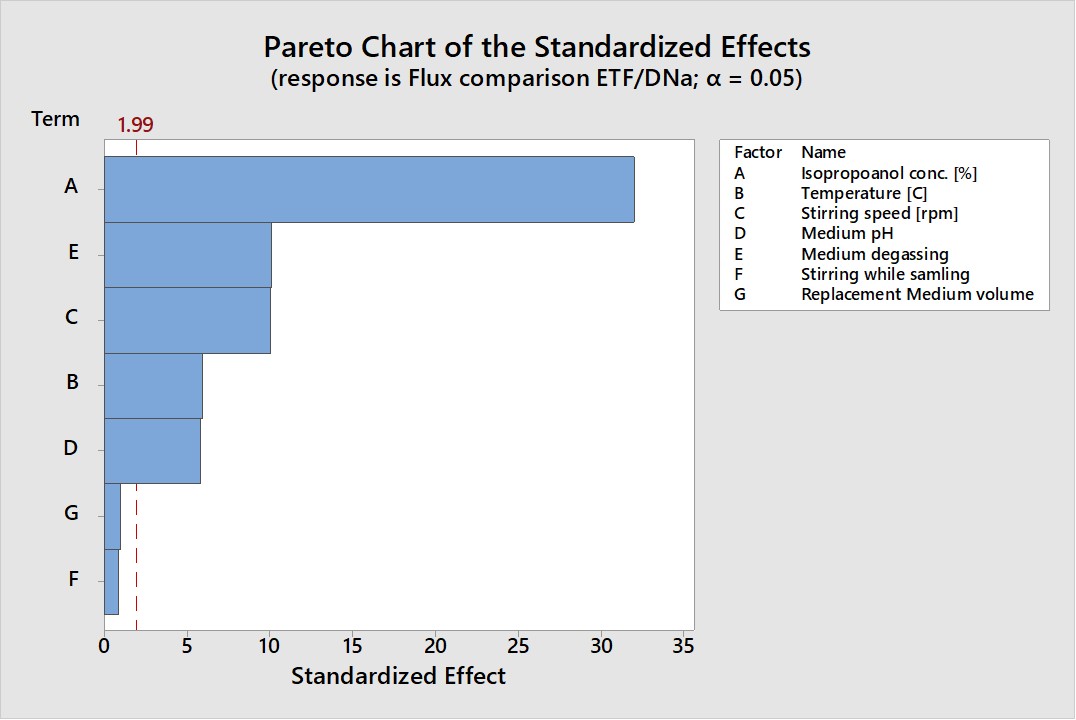 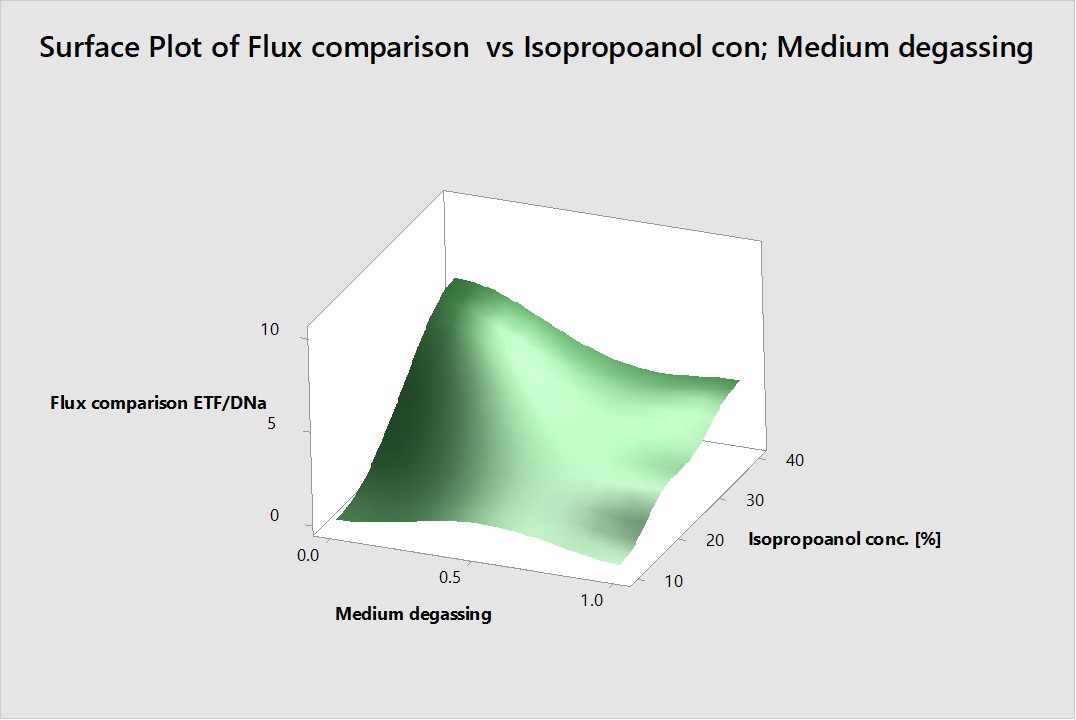