Purpose: We have previously developed a strategy to render liposomes pH-sensitive: a protonation-induced conformational flip of lipid tails, using a trans-2-aminocyclohexanol moiety (TACH) as a molecular lever. Such pH-sensitive liposomes are called fliposomes. DOX-loaded fliposomes exhibited enhanced anticancer activity against 3D multicellular spheroids in vitro, which are more representative of solid tumors than 2D monolayer cells.

In this study, we aim to 1) establish an orthotopic animal model of breast cancer and 2) to evaluate the anticancer activity of fliposomes in the animal model.

For pharmacokinetics study, animals were anesthetized under isoflurane and blood sample was taken by cardio puncture. All blood samples were mixed with sterilized water at volume ratio 1:2 to lyse all blood cells. The samples were then stored at -20℃ until further analysis.

To establish the orthotopic breast cancer model, the MDA-MB-468 cells (8,000,000 cells/ mouse) were then injected into the mammalian fat pad on the second nipple around the left axillary region. Following inoculation, the mice were observed daily for general health and appearance of tumors.

After inoculation, the tumors grew for 2 weeks to 70 - 100 mm3. The tumor-bearing mice were randomly divided into five groups (control, doxorubicin solution, conventional liposome, MOR-C16 fliposome, and AZE-C16 fliposome) of eight mice each except for the non-treatment group (5 mice). The grouping was based on the tumor size.

Afterward, 5 groups of treatment were administered to the mice once a week for 4 weeks, while PBS (100 μL) was administered as a control group. The tumor volume was calculated using the formula: Tumor volume (mm3) = 0.5*L*S2

Where L the long axis and S is the short axis of the tumor lump. The tumors and hearts were removed and weighted when the animals were euthanized 63 days post the first dose.


Results: DOX-loaded AZE-C16 fliposome displayed non-linear pharmacokinetics following IV administration. Compared to the data listed in the literature, the pharmacokinetic parameters of AZE-C16 and the MOR-C16 fliposome were similar to free doxorubicin, suggesting that doxorubicin may have leaked prematurely from two fliposome during the circulation before accumulation at the tumor site. 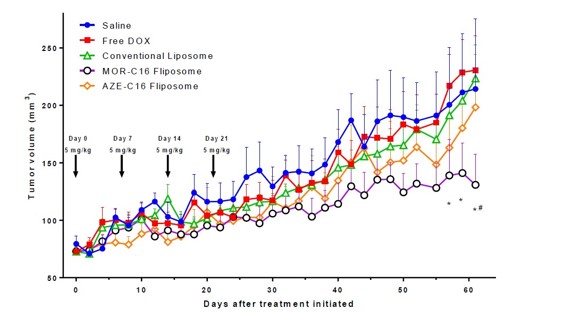