Purpose: The objective of this study was to investigate the potential of Kollicoat® Smartseal 100P polymer to enhance solubility of poorly soluble Efavirenz (EFV) via hot melt extrusion (HME) technology.


Methods: Kollicoat® Smartseal 100P, Polyethylene Glycol (PEG) 1500 and Efavirenz were tumble-mixed on a Maxiblend™ (GlobePharma, New Brunswick, NJ, USA) at 25 rpm for 15 minutes. The resulting blend was fed into a 11mm co-rotating twin screw extruder (Thermo Fisher Scientiﬁc, Waltham, MA, USA) and processed at 100 RPM. Temperature was varied from 120°C to 130°C according to the processability. PEG 1500 was used as plasticizer to lower the extrusion temperature and improve processability. The extrudates obtained were milled and sifted through ASTM #30 and the sieved powder was used for further studies. Differential Scanning Calorimetry (DSC) studies were done to investigate the nature and miscibility of drug with the excipients. In vitro drug dissolution studies were performed in simulated gastric fluid (SGF) without enzymes for 2 hours using USP apparatus II (SR8-plus, Hanson) at an agitation speed of 50 RPM and compared with that of pure EFV. In total 6 compositions comprised of three drug loads and two PEG concentrations were formulated and studied. The extrusion temperature and concentrations are shown in Table 1. Interactions between EFV and Kollicoat® Smartseal 100P were investigated by FTIR (Agilent Technologies, Cary 660, Santa Clara, CA).


Results: DSC results demonstrated that the polymer, PEG and drug were miscible, and the drug converted to an amorphous form after hot melt extrusion, as the sharp melting peak of Efavirenz at 140°C disappeared in the DSC thermograms of the extrudates (Fig. 1). The release studies showed that the percentage of drug release from formulations (F1-F3) were 100%, 92% and 32% for 10%, 20%, and 30% drug loads, respectively in 2 hours, whereas only 16% of free efavirenz dissolved in 2 hours. The formulations (F4-F6) showed 100%, 60% and 32% drug release in 2 hours for 10%, 20%, and 30% drug load, respectively. These results suggested increased dissolution rates in formulations with high Kollicoat® Smartseal 100P content. All of the extruded formulations demonstrated higher drug release as compared to the free drug. The dissolution parameters such as Dissolution efficiency (DE), Initial dissolution rate (IDR15), and t50 were also evaluated and shown in Table 1. These parameters also suggest that the dissolution profile of free drug was improved by Kollicoat® Smartseal 100P polymer at all drug concentrations. Among all, formulations with 10% drug load showed the highest DE % of more than 92%, maximum IDR15 of around 5.5 and least t50 of 4 minutes. Therefore, maximum solubility enhancement was achieved with 10% drug load.


Conclusion: The solubility of Efavirenz was improved by the polymer, Kollicoat® Smartseal 100P using hot melt extrusion. The solubilization effect is dependent on the amount of polymer in the extrudates. As the polymer concentration is increased, the solubility enhancement was increased. Thus, Kollicoat® Smartseal 100P is a potential polymer to improve the dissolution of poorly soluble drugs using hot melt extrusion techniques. 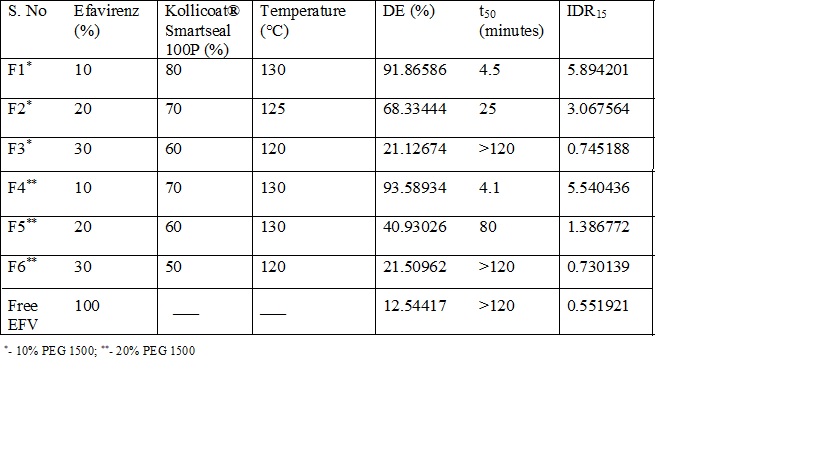 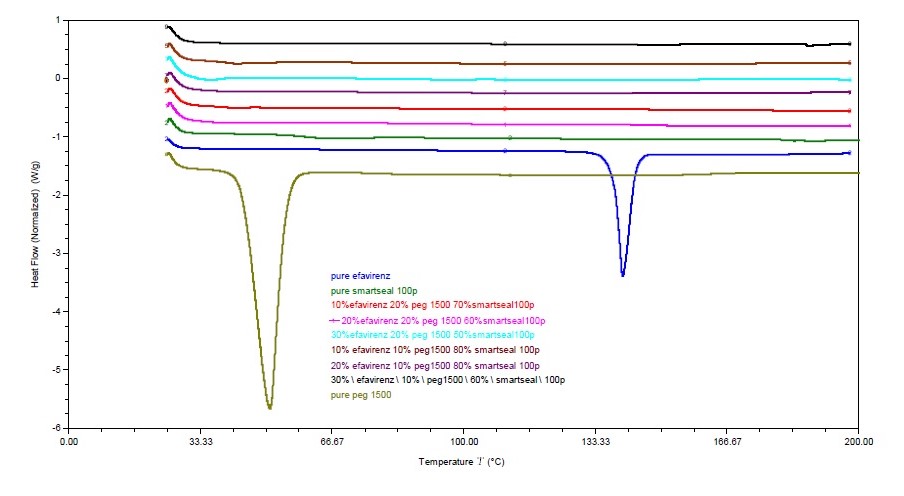