Purpose: In active pharmaceutical ingredient (API) manufacture, control of particle properties during crystallisation is of vital importance. Crystal morphology, size distribution and surface area directly impact the efficiency of downstream processes as well as the physicochemical properties of the final dosage form. Inadequately controlled crystallisation commonly leads to batch failure due to solvent entrapment, low product purity and/or the formation of undesired polymorphs. The pursuit for greater control is also supported by the regulatory authorities’ condition for reproduceable API quality and replication of physical attributes such as particle size distribution. It is therefore imperative to first characterise growth kinetics to enable the efficient development of robust crystallisation processes that negate the need for further uneconomical particle processing.

Here we present a salt/cocrystal case study on pyrimethanil tartaric acid wherein the crystallisation has been designed to target a metastable form with desirable crystal morphology and the particle size is tuned through modelling of growth kinetics. Significantly, the case study describes the crucial development steps that facilitate design of a controlled crystallisation that meets a desired particle size specification.


Methods: In this work we have used state of the art process analytical technology (PAT) to investigate cooling crystallisation of pyrimethanil tartaric acid. The Blaze900 probe (BlazeMetrics) has allowed us to simultaneously capture in situ chord length distributions, high resolution optical microscopy and Raman spectroscopy from a single probe unit. Multivariate analysis of in situ IR spectra has also enabled rapid prediction of the solute concentration to complement the Blaze900 measurements. We have structured this data and employed population balance models to predict the temporal evolution of particle size distributions during both crystallisation and milling operations. Process chemistry software including DynoChem® and gCRYSTAL® then provided a computational route to designing scaled up crystallisations to meet a target product specification.


Results: Initial screening work was carried out to understand the polymorphic landscape, identify the most desirable solid form and select process appropriate solvents. Through a design of experiments approach the thermodynamic interplay of polymorphs in the selected solvent system was efficiently mapped and a design space for the crystallisation scoped out.

Using the Blaze900 probe imaging we have pinpointed the nascent stages of particle growth such as oil formation and closely monitored the interconversion of metastable solid forms, highlighting the power of process optics for capturing the critical crystallisation processes within this space. Furthermore, we have used in situ Raman spectroscopy to show the conversion between desired and unwanted solid forms during cooling; by decoupling the dissolved component spectra and carrying out a turbidity normalisation we have clearly measured the Raman peak shift to monitor the interconversion.

Now with a strong understanding of the API metastability, steps were taken towards designing a controlled procedure. The fundamental basis for understanding any crystallisation process is solubility which was initially captured turbidimetrically using Crystal 16 equipment. The data was fit to an appropriate model equation to predict the solubility and metastable zone width for the system in question.

Using the Mettler Toledo ReactIR probe we have built a multivariate model that allows instantaneous measurement of dissolved API concentration. Combining this with the solubility landscape provides a tight control over supersaturation and by using DynoChem® modelling we could extract crystal growth parameters from seeded desupersaturation curves. Additionally, rates of attrition, agglomeration and secondary nucleation were estimated by measuring particle size distributions at time intervals throughout crystal growth.

The devised model was then used to carefully select initial seed properties and crystallisation conditions to enable final D10, D50 and D90 specifications to be met. Combining this with computational fluid dynamics capabilities within gCRYSTAL® we have used complex mixing predictions to optimise crystallisations on larger scales. PAT was then implemented from 20mL vials up to 2L vessels to validate the model predictions.


Conclusion: Crystallisation is a critical process for producing high quality APIs and a well-designed crystallisation can significantly reduce the cycle time for downstream processes. Modifying a process at manufacturing scale will typically be time consuming, expensive and challenged by regulation, so it is highly advantageous to characterise the crystallisation at the development stage. In this work we have devised a process that uses cutting edge PAT to gather critical information on a model salt/cocrystal crystallisation system. With relatively little experimental burden we have built a validated model that can predict crystal growth over a range of reactor scales and offers a sophisticated method for controlling supersaturation. The tools we have demonstrated enables development of robust crystallisations that can reliably meet target product specifications making scale up and tech transfer as efficient as possible. 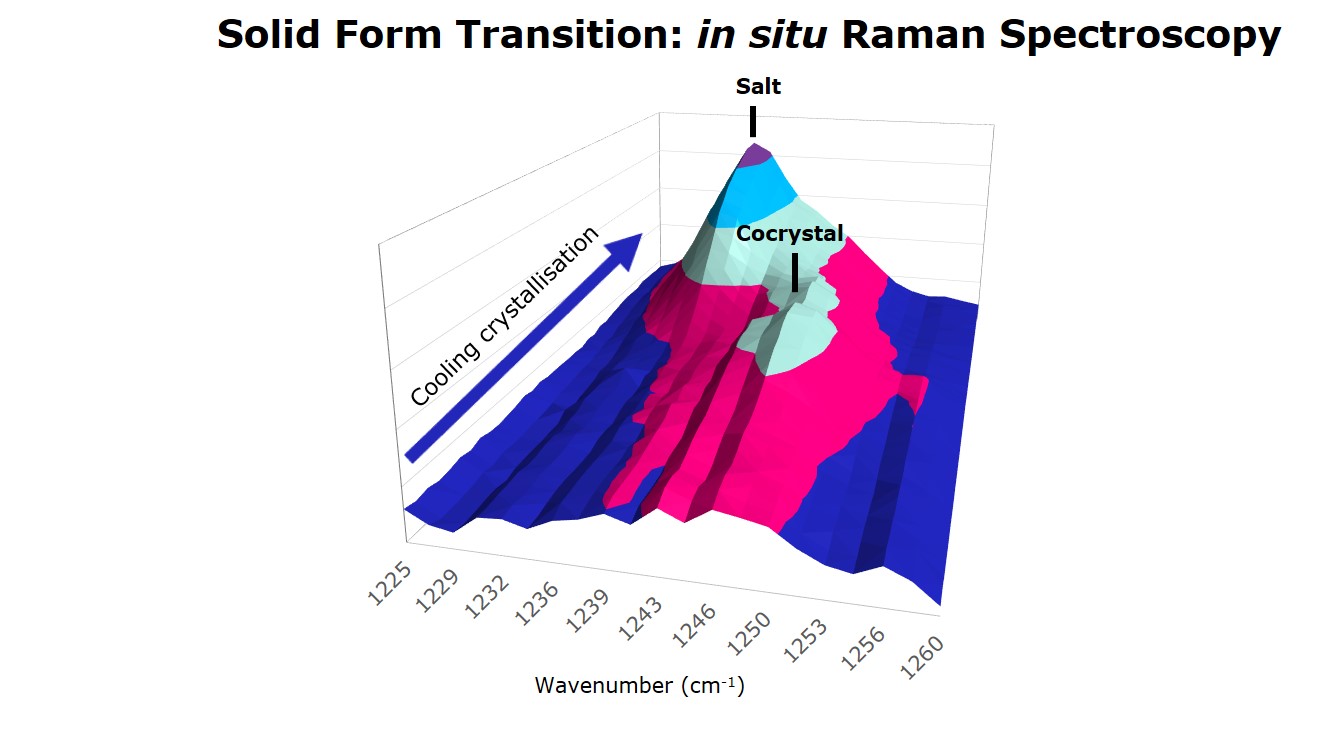