Purpose: Doxorubicin (Dox) a widely used anticancer agent has a serious side effect of irreversible cardiomyopathy. GDox conjugate synthesised in our lab has been designed in such a way that its acid labile hydrazone bond linking gelatin to Dox will break only at pH of lysosomal microenvironment. Once released, Dox can reach to the nucleus of cells and thus can induce cell death by its well-known mechanisms. Studies previously conducted in our lab had shown successful uptake of GDox into lysosomes of breast cancer cells (MCF7 and MDA-MB-231). However, only a small amount of Dox reached the nucleus by 24h in the MCF7 cells and substantial lysosome damage was observed in the MDA cells. The next step is to evaluate GDox role in causing DNA damage and thus inducing apoptosis. The goal of this study design is to compare DNA strand breaks triggered by GDox and free Dox in these two breast cancer cell lines.


Methods: Doxorubicin was conjugated to a high molecular weight gelatin using EDC chemistry. GDox was characterized for stability using high pressure size exclusion chromatography, drug release was measured by HPLC and drug load with UV-Vis spectroscopy. GDox was purified with desalting columns prior to cell experiments. MCF7 and MDA-MB-231 cells were seeded on a sterile cover slips on 6 well plates overnight followed by incubation with 10 µM free dox or equivalent concentration of GDox for predetermined time points. Staurosporine (5µM) was incubated with cells for 4hr and was used as a positive control for all cell experiments. Cells were washed with DPBS 2X and TUNEL assay was performed to detect DNA strand breaks. A freshly prepared TUNEL reagent was added to the coverslips and incubated for 60 min. Cells were washed and coverslips were mounted carefully on glass slides. An inverted fluorescence microscope was used to capture images under Texas Red and RFP filters under 200X and 400X magnifications. FiJi (ImageJ) software was used to quantify cells undergoing apoptosis as a percentage of total number of cells. Individual experiments were performed on 3 different days and results are expressed as mean ± SEM.


Conclusion: DNA damage was induced by GDox in these cells as detected by TUNEL assay as one of the tool for studying apoptosis. A rising trend in apoptosis percentage was observed both with conjugated Dox and free drug in both cell lines. Quantification of images revealed a similar extent of apoptosis in both cell lines. Based on the similar DNA damage but previously established high lysosomal uptake and damage, the lysosomal pathway can be explored further as a potential pathway of DNA damage resulting in apoptosis. 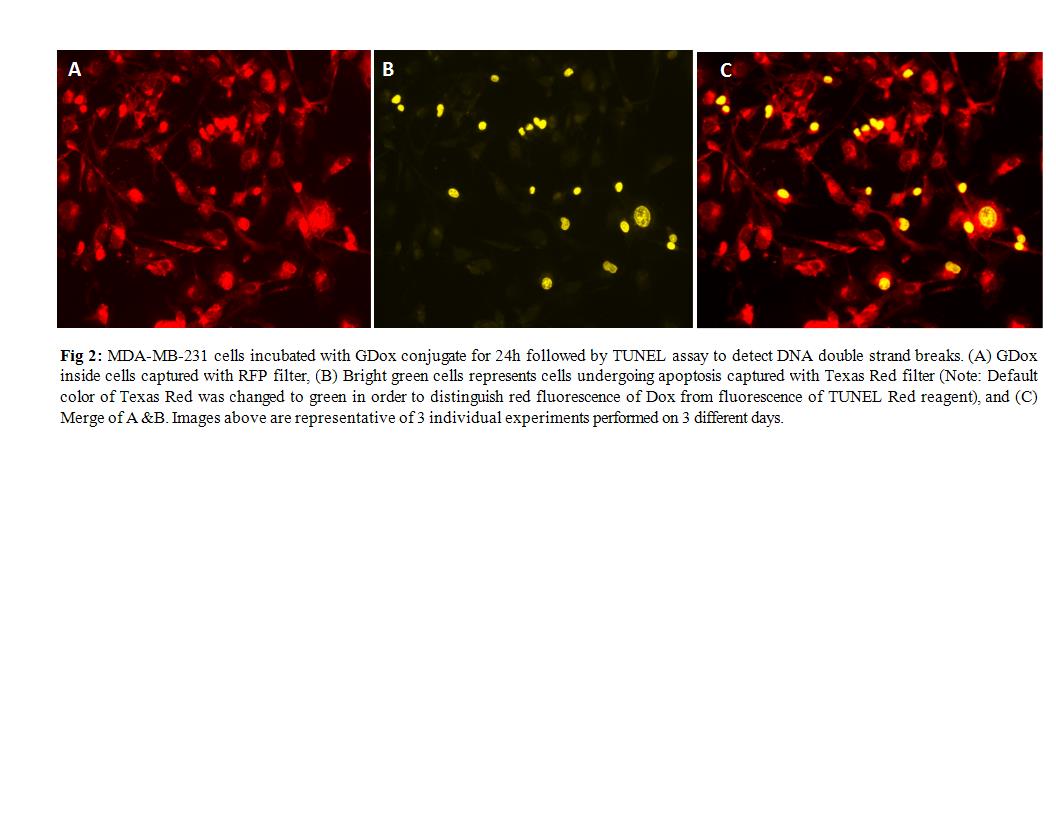