Purpose: Until now, there are no specific drug delivery systems for the targeted topical drug therapy of diseases of the esophagus. The swallowing of solutions or suspensions is the most frequently applied opportunity to deliver medications locally to the mucosa of the esophagus. However, as esophageal transit times are very short, this results in only short contact times of typically some seconds. Furthermore, physiological salivation leads to a fast clearance of adhering drug particles from the esophageal mucosa. The aim of this work was to test the drug release characteristics of the EsoCap system, a novel and innovative drug delivery technology that enables the application of slowly dissolving mucoadhesive polymer films to the esophagus.

The EsoCap system is composed of a mucoadhesive polymer film (Figure 1.B.) furled into a hard capsule with a slit (Figure 1.A.). The bottom of the hard capsule contains a compressed sinker (Figure 1.D.) as weight reducing buoyancy. The upper end of the polymer film, which protrudes through the slit in the hard capsule, is fixed to a retainer thread (Figure 1.C.). The thread in turn is connected to an application beaker filled with water. While the capsule is swallowed and passes the esophagus, the mucoadhesive film rolls off and attaches to the esophageal mucosa, where it allows long acting drug delivery.


Methods: Mucoadhesive films were produced by a solvent casting evaporation method. Components of the film were purified water as solvent (80 g), glycerol (Caelo, Germany) as plasticizer (2 g), polyvinyl alcohol 18-88 (Merck, Germany) as mucoadhesive polymer (18 g) and fluorescein sodium (Sigma-Aldrich, Germany) as model drug (0,36 g). All components were continuously mixed for 6 h at 80 °C. Thereafter, the polymer mass was cooled down for 20 h and continuously homogenized. The homogeneous and bubble-free mass was spread out by means of a motorized film applicator (MTV Messtechnik, Germany) and a squeegee with a gap height of 1000 µm on a coated liner (Polysilk 111/105, Loparex, Netherlands). The film was dried for 16 h at room temperature. Thereafter, the film was divided by a cutting machine in 4 mm wide and 22 cm long films and stored under light protection.

A thin food-safe thread made of polyester was fixed to one of the ends of the film with polymer mass, which was used for the production of the film. The rolled film was inserted into a slotted capsule, which was made from a commercial size 00 hard gelatin capsule cut by a saw. Furthermore, a compressed sinker (509 mg) prepared from calcium hydrogen phosphate (Gustav Parmentier GmbH, Germany), croscarmellose sodium (JRS Pharma, Germany), magnesium stearate (Sigma-Aldrich, Germany) and silica (Fagron GmbH, Germany) was added to the capsule.

The fluorescein sodium containing films (0.23 mg/cm2) were tested in a newly developed dissolution test device that allows the investigation of the release properties of esophageal films under biorelevant salivary flow rates. The release device consists of three grooves with a width of 5 mm. As simulated saliva purified water was pumped through the device using peristaltic pumps (ISMATEC, Cole-Parmer GmbH, Germany) at the inlet and outlet of the device. Concentrations of released drug were determined in the dissolution medium reservoir by UV-VIS spectroscopy at 235 nm (Agilent Cary 60, Agilent Technologies Inc., USA). All experiments were carried out under exclusion of light. A flow rate of simulated saliva of 2 mL/min was applied with the inlet pump (Figure 2.A.), reflecting basal salivary secretions. The device was operated at two different angels of inclination (30° and 80°) in order to investigate the influence of posture on the release characteristics.


Results: The results of dissolution testing of the film at low flow rates of 2 mL/min for 2 h are shown in Figure 3. During the first 20 minutes an initial burst release occurred followed by 100 minutes of continuous slow release. In total, within the 2 h about 85% of the fluorescein sodium were detected in the outflowing simulated saliva. No influence of the angle of inclination was observed. 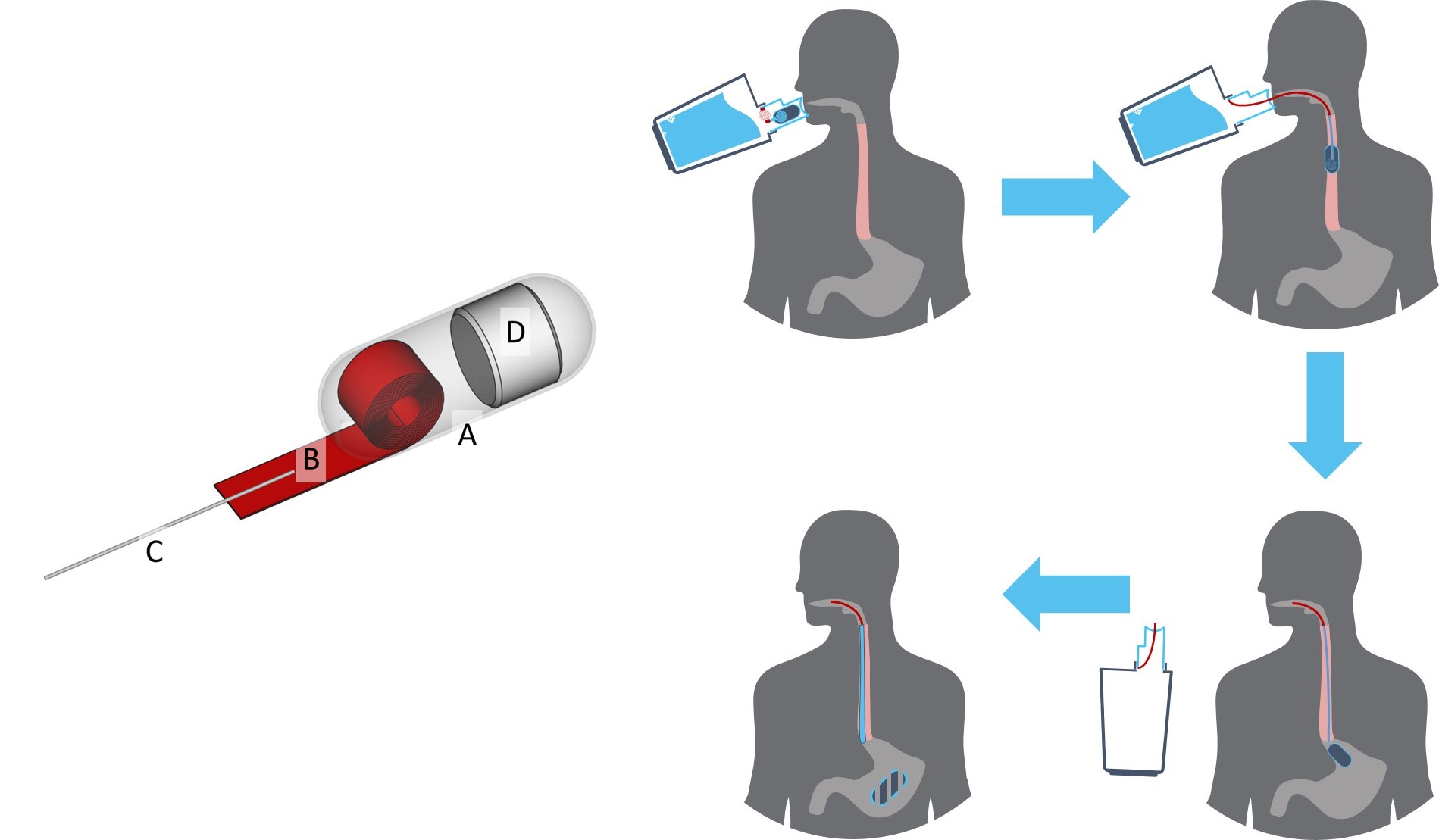 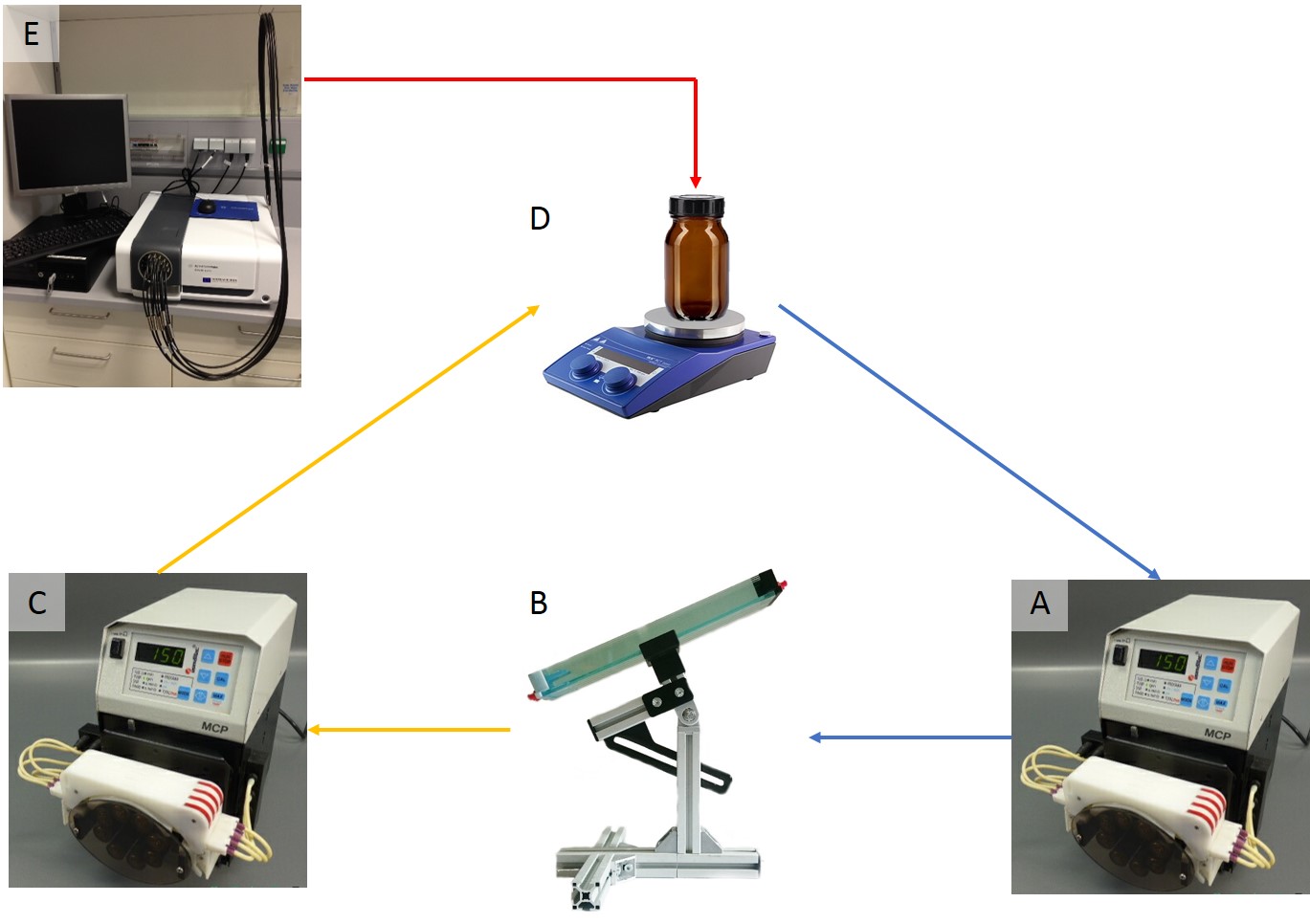 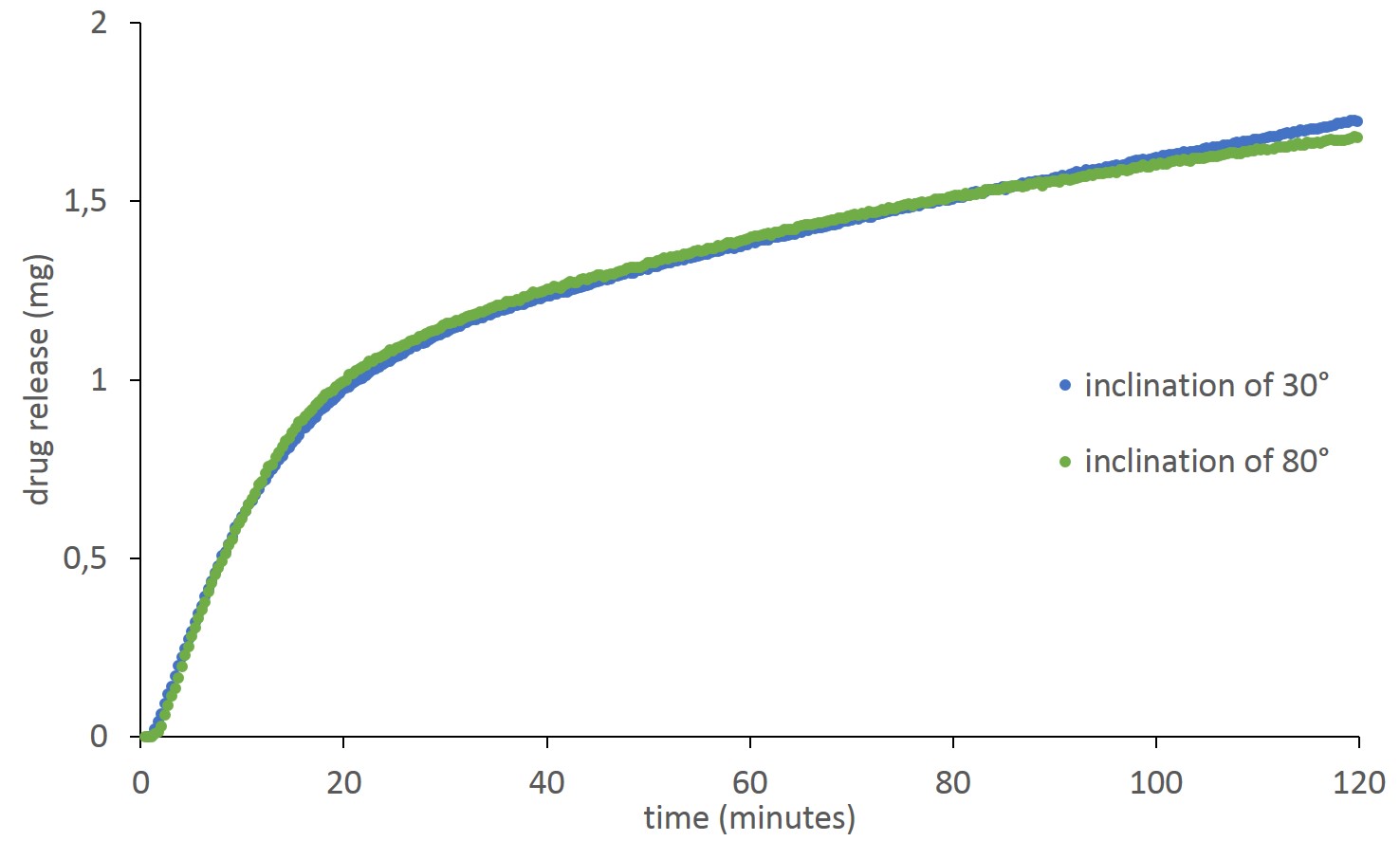