Purpose: The purpose of this study was two-fold: (a) to determine if storage temperature has the potential to alter the release of caffeine from lipophilic, semi-solid, topical formulations and (b) to assess the effect of certain fatty acids on the dissolution profiles of the same formulations using a USP Type 1 and 2 Dissolution Apparatus.


Methods: One control and three test formulations were prepared by combining caffeine (10% w/w) with (1) base alone (Lipoderm®, PCCA, Houston, TX), (2) 7.5% lauric acid in base, (3) 7.5% oleic acid in base, and (4) 7.5% myristic acid in base. Each formulation was prepared at room temperature by combining the ingredients in an electronic mortar and pestle followed by homogenization on an ointment mill. The formulations were transferred back to the electric mortar and pestle and reprocessed. Aliquots of each formulation were then stored in the freezer (-7 °C), in the refrigerator (8 °C), at ambient room temperature (RT), and in the oven (100 °C) until tested. Approximately 500 mg of each formulation was weighed into the sample compartment of the immersion cells (Hanson Research, Chatsworth, CA), placed into individual flat-bottom vessels containing 100 mL of phosphate-buffered saline (PBS), fitted with 25 mm STRAT‑M® membranes (Millipore Sigma, St. Louis, MO), and evaluated using a USP dissolution apparatus. The receiving medium was maintained at 32 °C and samples were collected at 0.5, 1, 2, 4 and 6 hours (n=3). Caffeine concentrations were measured using a UV-Vis spectrophotometer with the AUC of caffeine measured from approximately 274 to 306 nm.


Results: The dissolution/release profiles of the control and the three test formulations are shown in Figure 1(a-d). Overall, the dissolution profiles indicate that storage temperature had a positive effect on the release of caffeine. For example, storage of the control formulation in the freezer and the refrigerator showed no detectable levels of caffeine 6 hours after dissolution testing. However, when stored at elevated temperatures (i.e. RT and 100 °C), 0.62% w/w and 0.82% w/w caffeine was released after 6 hours, respectively. In general, this trend of increased caffeine release with storage at elevated temperatures was observed for all formulations. Using the 6-hour timepoint as reference, caffeine release increased as a function of storage temperature for all formulations, Table 1.

With regard to the influence of excipients, the data indicate that lauric acid produced the greatest rate and extent of caffeine release among all fatty acid formulations tested. Normalization of the amount of caffeine released after 6 hours for the RT and 100 °C storage conditions is summarized in Table 2.


Conclusion: Under the conditions investigated and for the formulations tested, the data strongly suggest that storage temperature alters the release profile of caffeine. In general, the rate and extent of caffeine release increases as storage temperature increases. Furthermore, the data indicate that the rate and extent of release of caffeine follow the order of lauric acid > oleic acid >myristic acid > control. Therefore, when stored at 100 °C, the lauric acid-containing formulation exhibited the greatest amount and fastest release of caffeine. 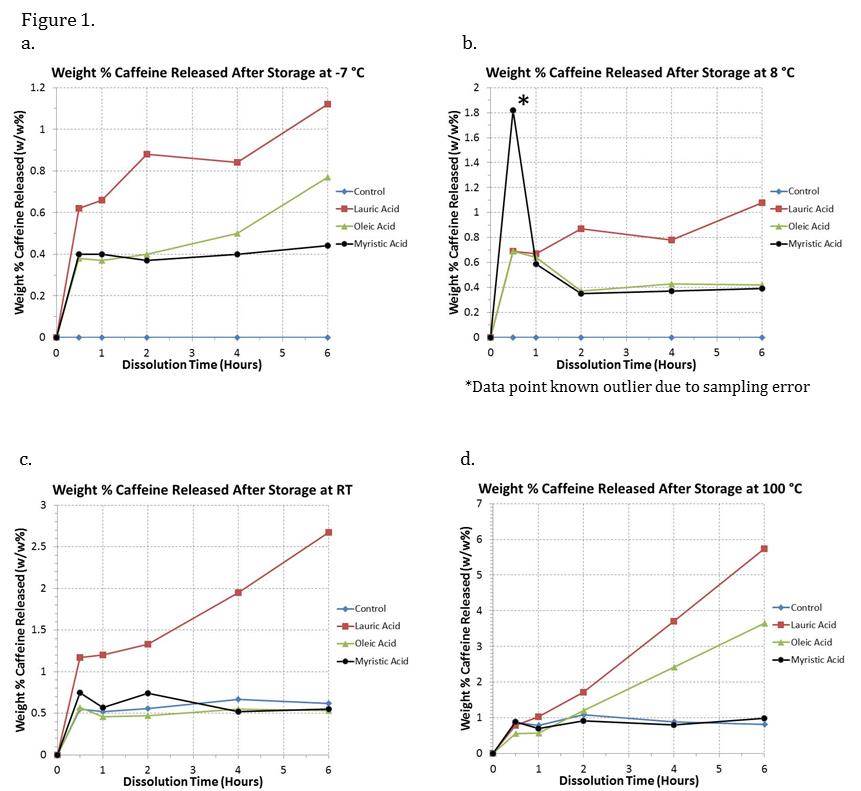