Purpose: Fused deposition modelling (FDM) is the most often applied 3D printing technique. The main purpose of this study is the application of FDM to fabricate hot melt extruded poly (vinyl alcohol) (PVA)-ketoprofen (KTP) based films for the topical delivery of ketoprofen.


Methods: KTP-PVA physical mixtures at 40% (w/w) of KTP were blended using a V-blender (GlobePharma, MaxiblendTM) for 15 minutes. The solid dispersions (SDs) of KTP were prepared using twin screw process extruded using a co-rotating twin-screw hot melt extruder (Process 11, Thermo Fisher Scientific). The extrusion temperature was set at 170 oC, with a screw speed of 100 RPM and feed rate of 1.7 to 2.2 g/min. A rod die of 1.5mm diameter was used to prepare the filaments. Mechanical properties of the extruded filaments (stiffness) was evaluated using the Repka-Zhang test. Filaments were placed on a flat surface and force required to make a 35% deformation of the filament was noted and braking stiffness was calculated. Extruded filaments were printed using the Original Prusa i3 MK2 3D printer at a printer temperature and bed temperature of 200°C and 60°C respectively. The films were printed at 100% and 80% infill density to a fixed diameter of 15mm and a thickness of 0.1, 0.2 and 0.3-mm (Figure 1). Prepared films were evaluated for thickness, weight, drug content, content uniformity and drug release. In vitro dissolution studies were performed for the 0.2 mm and 0.3 thickness at 100% infill density in phosphate buffer saline (PBS) pH 7.5 using the USP-V paddle over disk (SR8-plus, Hanson) method, at an agitation speed of 50 RPM. The drug release was evaluated using a UV–Vis spectrophotometer (Genesys 180, Thermoscientific) at 260 nm. The ex vivo drug permeation was investigated in human cadaver skin over 48 h using Franz diffusion cells.


Results: The drug polymer mixture was successfully extruded with a low process torque of 19-20%. The stiffness of the strands was found to be 7,968.5 g/mm2 (%RSD - 5%) and force of 19,166.4 grams (%RSD - 5.1%). The observed stiffness of the filaments was suitable for FDM 3D printing. Flexible films were obtained at 0.2 mm and 0.3 mm thickness for the 80% and 100% infill densities, whereas the 0.1mm thickness films were too brittle. The weight variation, drug content and content uniformity values were within acceptable limits as shown Table 1. From the in vitro release studies, it was observed that the drug release was faster with 0.2 mm thickness films compared to that of the 0.3mm thickness (Figure 2). Complete drug release from the films occured within 2 hours. The ex vivo permeation study demonstrated the sustained release characteristics suitable for desired topical application of 3D printed films.


Conclusion: FDM was successfully utilized in the preparation of ketoprofen films for topical delivery. The fabricated films were flexible and can be efficiently used for topical application for sustained release. The film thickness was inversely proportional to the in vitro drug release. 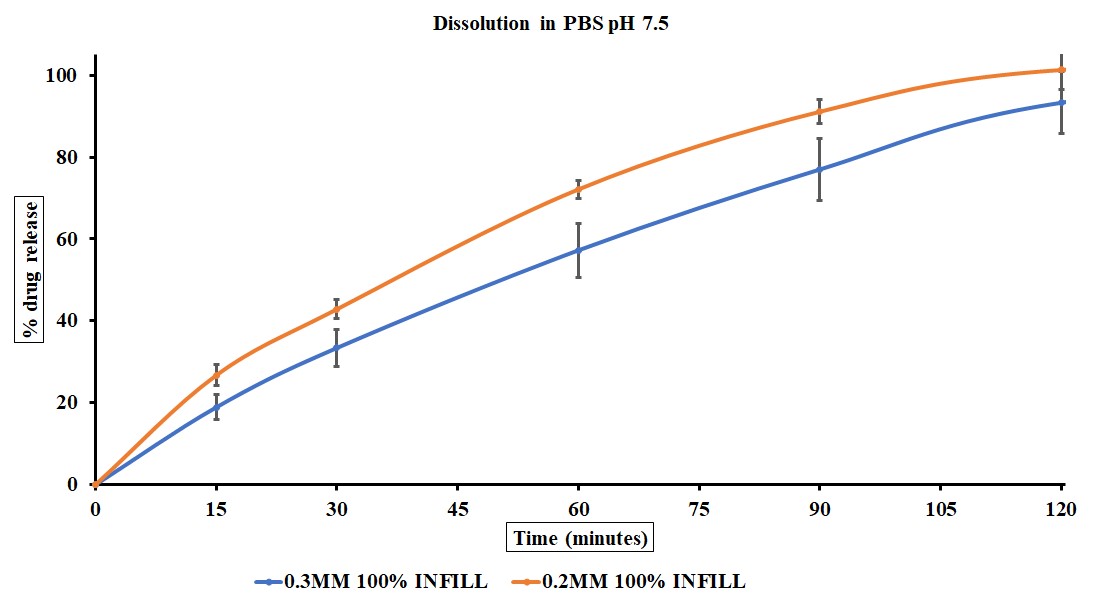