Purpose: Co-crystals, an emerging approach to modify solubility, dissolution, and other physiochemical properties of drug substances provide an alternative to chemical modification of the drug substance as well as salt, amorphous, solvate and polymorphic drug forms that all have limitations in their utility. The formation of co-crystals of an API with a co-former, excipient, a different drug molecule, or a solubilizing agent, provides the opportunity to design delivery systems at the molecular level and to enhance their pharmaceutical properties. The objective of the study is to assess the processability of the theophylline nicotinamide co-crystal formation by a water-soluble Kollidon® VA-64 polymer in the Hot Melt Extrusion (HME) process.


Methods: Theophylline, a BCS class I was chosen as the model drug and Nicotinamide, a vitamin B family compound was selected as a suitable co-former for the co-crystals formation. Kollidon® VA-64 was selected as a polymer to act as a process aid during the synthesis of co-crystals in the HME process. Theophylline and Nicotinamide in 1:1 molar ratio along with 5% Kollidon® VA-64 polymer were weighed and the physical mixture was blended in a V-blender (GlobePharma) for 20 minutes. Kollidon® VA-64, a hydrophilic polymer is widely used as a processing aid due to its process suitability and formulation stability. Co-crystallization in HME was performed using a 11mm co-rotating twin-screw extruder (Process 11 twin screw extruder, Thermo Fisher Scientific) equipped with a 2mm rod shaped die. A customized screw design was used by employing several mixing elements for co-crystals formation. The prepared blend was continuously fed into the extruder hopper at 5% feed rate operating at a screw speed of 50rpm with an extrusion temperature of 160°C. Extrudates were collected as strands, cooled and milled for further characterization studies. Solid-state characterization of the extrudates was performed and analyzed by Differential Scanning Calorimetry (DSC) and Fourier Transform Infrared Spectroscopy (FTIR). The feasibility to formulate the extrudate into solid dosage forms was assessed by formulating a capsule or tablet blend. The flow properties of the co-crystals, polymer based co-crystals and physical blends of solid dosage forms were evaluated by Carr’s compressibility index and Hausner’s ratio


Results: During the extrusion process, it was observed that Kollidon® VA-64 polymer had an impact on the processability of the co-crystals. The torque range for the polymer-assisted co-crystals was observed to be 10-20% as compared to the theophylline nicotinamide co-crystals without the polymer at 25-30%. The characteristic appearance of Kollidon® VA-64 extrudates was observed as a clear extrudate without air entrapment. Thermal behavior of the physical blend and the extruded formulations were examined by differential scanning calorimetry (DSC) (TA instruments DSC 25 Discovery series, New Castle, DE) coupled with a refrigerated cooling system. A co-crystal melting peak at 178°C which differs from the melting points of either theophylline (273°C) or nicotinamide (129°C) was formed indicating a new phase was formed between theophylline and nicotinamide. Eutectic formation was not observed in the thermogram indicating complete co-crystal formation during hot melt extrusion. Intermolecular hydrogen bonding between drug and co-former was determined using an FTIR spectrometer (Agilent Technologies Cary 660, Santa Clara, CA). During co crystallization of theophylline and nicotinamide, due to hydrogen bond formation the characteristic peaks of theophylline and nicotinamide were shifted to 1611 cm -1 and 1707 cm -1. The compressibility index and Hausner’s ratio for the Kollidon® VA-64 assisted co-crystals were found to be 22.86 and 1.28 (passable) and similarly the tablet or capsule blend was passable when compared to the pure theophylline of 29.25 and 1.41 (poor).


Conclusion: The application of (HME) in the production of co-crystals has been demonstrated for the model co-crystal system. The study demonstrated that Kollidon® VA-64 polymer assisted the formation of theophylline and nicotinamide co-crystals in a 1:1 molar ratio by utilizing HME technology. It was observed that the temperature and extent of mixing in the extruder were the primary process parameters that influenced the extent of conversion to co-crystals during extrusion processing. The incorporation of Kollidon® VA-64 polymer in the extrusion process provides further flexibility in optimizing co-crystal production without eutectic formation. The prepared co-crystals had improved flow characteristics in comparison to the pure theophylline. Extrusion can be considered as an efficient, scalable and solvent free process for the manufacture of co-crystals, which provides a viable alternative to solution crystallization processes and other conventional techniques. 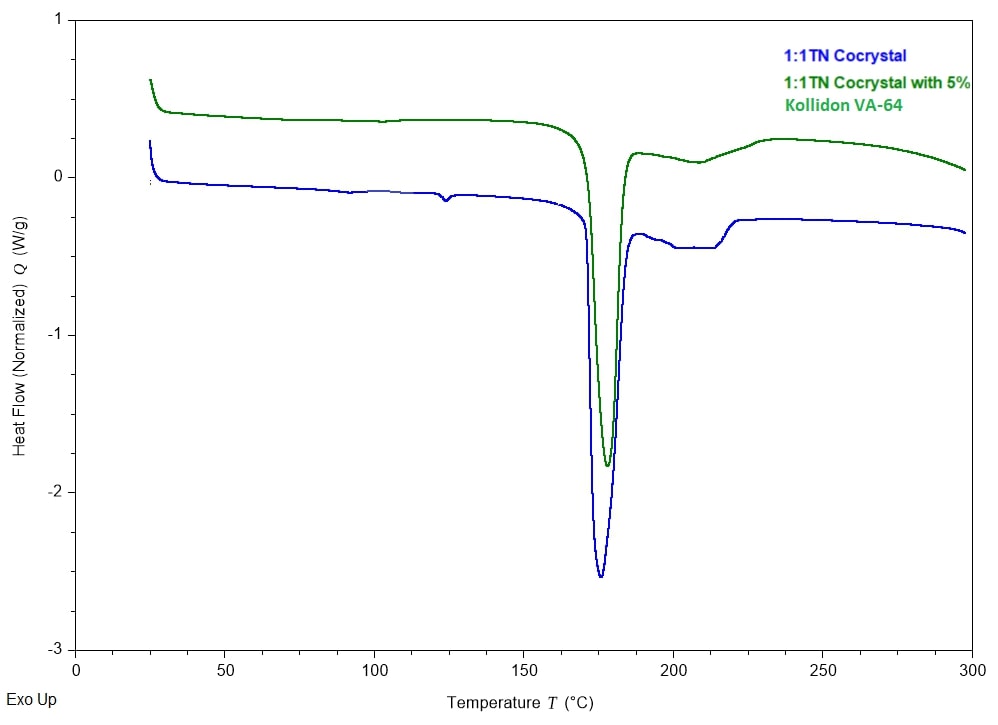