Purpose: Although viscosity is measured at various stages of the pharmaceutical formulation development process, testing is often limited to an arbitrarily chosen single shear rate. Expanding measurement protocols to include a broad range of shear rates provides significantly more information regarding protein-protein interactions (PPI) and the resulting microstructure. Shear rate dependent viscosity data can be analyzed using a scaling method originally applied to colloidal dispersions to extract a characteristic length scale. When compared to the size of an individual protein molecule, the length scale indicates the extent of cluster formation due to attractive PPI. This analysis is performed on formulations with therapeutic levels of protein so that neither the PPI nor cluster size are altered by dilution. By monitoring the cluster size during the formulation process, the ability of excipients to prevent aggregation and ensure long term stability and efficacy can be assessed.


Methods: Viscosity measurements were performed on concentrated Bovine g-Globulin (BgG) formulations using a microfluidic viscometer. Protein-protein interactions (PPI) were systematically adjusted in the model protein formulation by varying buffer composition. pH, salt type, and ionic strength were altered to control the electrostatics and magnitude of attraction. The viscosity for each formulation was measured over a broad range of shear rates so that both the low shear limiting plateau and shear thinning regime were observed. A rescaling process was used to extract the cluster size (L). The viscosity was scaled with the low shear plateau and buffer values. Shear rate was converted to the dimensionless Peclet number (Pe), which is the ratio of time scales associated with Brownian motion and the shear flow. The cluster size was chosen so that the onset of shear thinning occurred at Pe = 1. This is the point at which the external flow begins to overcome the Brownian motion of the clusters acting to maintain a microstructure close to equilibrium.


Results: The impact of buffer composition on the PPI is clearly illustrated in the low shear viscosity as well as the onset of non-Newtonian or shear thinning behavior. The addition of salt initially decreases the low shear plateau but continuing to increase the ionic strength leads to a rise in viscosity. The exact trend depends on the type of salt and where it falls along the Hofmeister series. The onset of shear thinning shifts to lower rates as the low shear viscosity increases. Rescaling the shear rate dependent viscosity data as previously described produces a master curve and provides a characteristic length scale associated with the protein cluster size. A strong correlation is also observed between the low shear plateau and the extent of association represented by the effective volume of a cluster (L3).


Conclusion: Measuring the viscosity over a range of shear rates offers a significant advantage over single point testing for concentrated proteins. Both the low shear Newtonian plateau and the onset of shear thinning are indicative of the extent of cluster formation due to attractive PPI. In addition to the practical relevance of viscosity to predict product delivery and processability, the shear rate dependent measurements show promise as an alternative method to assess the degree of association without concern regarding the impact of the dilution process. 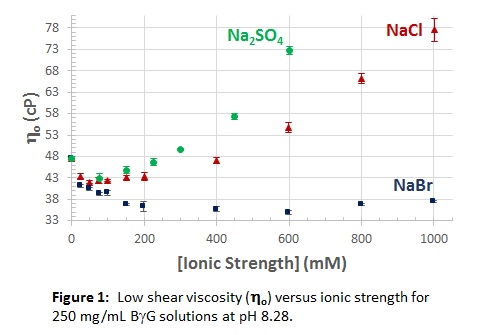 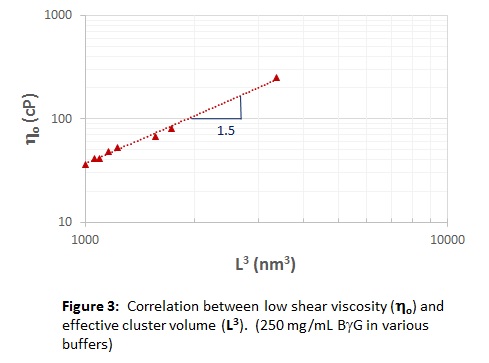 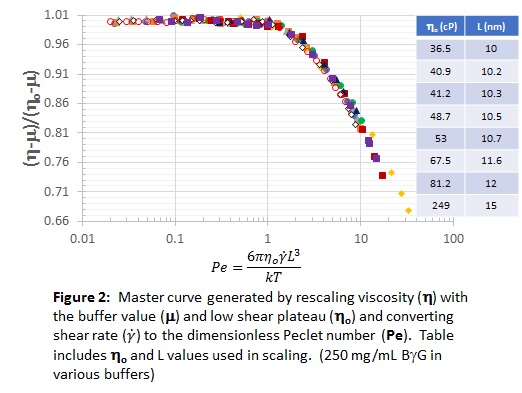