Purpose: Biopharmaceuticals advantages over conventional drugs are high selectivity and efficacy, limited side effects and more predictable behavior in vivo. Due to their low oral bioavailability, low solubility and large molecular size, they are often administered via parenteral route which may decrease the patient compliance due to the frequent injections [1,2].

Hot melt extrusion (HME) is an alternative technology for the production of controlled release formulations of biopharmaceuticals. It is a continuous and solvent-free process, which results in a small ecological footprint at industrial scale. However, it may induce the degradation of some thermolabile compounds [4].

The main goal of this work is to assess if HME is an alternative technology suitable for the parenteral administration of controlled release particles containing biopharmaceutical drugs. To assess that, two PLGA grades were processed in the HME and benchmarked using lysozyme as a model drug. The lysozyme activity was measured in each step.


Methods: Lysozyme was milled using jet milling until a suitable particle size was achieved. Afterwards, the micronized API was processed with PLGA RESOMER 504H and 752S using an extrusion temperature of 83 ºC and a drug load of 20%. The extrudates were milled by hammer milling and subsequently sieved. The final product was characterized by scanning electron microscopy (SEM), the particle size distribution was assessed with laser diffraction and the protein’s bioactivity was measured with a Lysozyme activity kit. The in vitro release (IVR) was performed by the sample-and-separate approach, using phosphate buffered saline (pH 7.4) with 0.05% (w/v) sodium azide as dissolution medium. The testing vessels were placed in an orbital shaker-incubator at 37 ºC and agitated at 50 rpm. At pre-determined time intervals, 2 mL were withdrawn and centrifuged at 13500 rpm for 5 min. The protein content in the supernatants was analyzed by HPLC. The remaining material was resuspended with an equal amount of media and transferred back to the testing vessels.


Results: Lysozyme was micronized five times until a ratio of 24 between the size of API and the final particles was achieved (Dv50 < 5 μm). The differences in the particle size between raw lysozyme (a) and lysozyme after the first (b) and fifth (c) micronizations are shown in Figure 1. The impact forces associated with jet milling had no significant impact in protein’s bioactivity, as 95±1% of its bioactivity was maintained after the fifth micronization (Figure 2).

Particles with similar particle sizes among them were produced with Resomer 504H (Figure 1, d) and 752S (Figure 1,e). Comparing both polymer grades, the particles produced with Resomer 504H showed a higher burst release and a faster degradation timeframe, which is supported by the supplier’s information (Figure 3). For the time of the study an incomplete release was observed for both grades (80% for Resomer 504H and 40% for RESOMER 752S). The particles were additionally washed with water to remove the API at its surface and consequently reduce the burst release, as shown in Figure 1 (f).


Conclusion: Hot melt extrusion is a suitable technology to produce lysozyme-PLGA controlled release particles. Jet milling and hammer milling are appropriate technologies to micronize lysozyme and the extrudates. Despite the differences in the release profile of both polymers, no significant variance was observed in the bioactivity of the lysozyme released.

As future work, a Design of Experiments (DoE) will be performed to assess the influence of formulation and the extrusion temperature in the lysozyme released profile. Some particles will be washed with water to remove the API at its surface and their release profile will be compared with particles produced under the same processing conditions 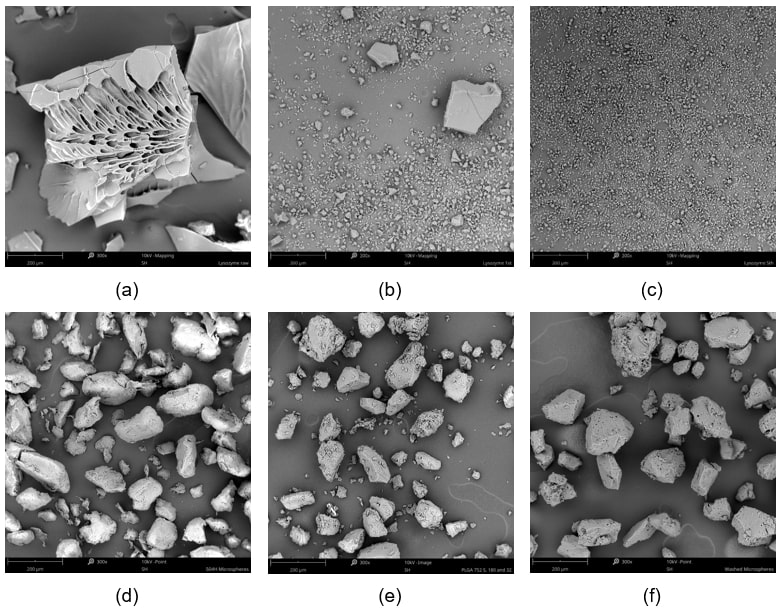 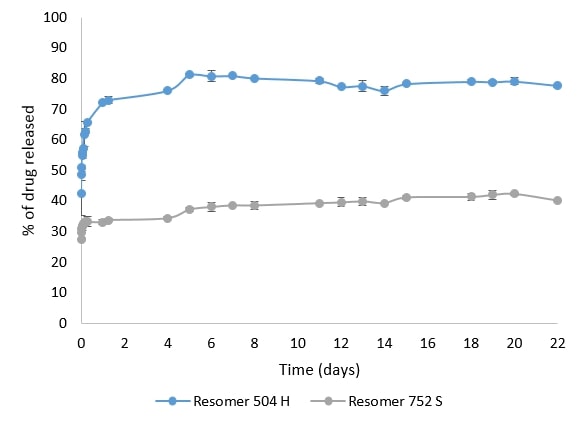