Purpose: Currently, insulin is administered mainly by parenteral routes to treat diabetes mellitus. To improve patient compliance, sublingual administration of insulin in the form of polymeric films is an attractive alternative. Polymeric films (of polyvinyl alcohol, PVA) provide distinct advantages over other solid dosage forms including larger surface area which leads to rapid disintegration and dissolution within the oral cavity. Since inclusion of permeation enhancer becomes a prerequisite for any insulin formulation owing to its hydrophilicity and large molecular weight, HPβCD (2-hydroxypropyl-β-cyclodextrin) and poloxamer 188 have been explored as permeation enhancers for insulin solution in previous investigation. In this current investigation, PVA based insulin film has been formulated along with permeation enhancers as an attempt to improve feasibility of insulin solution via sublingual administration.


Methods: The PVA based sublingual insulin films were formulated to study effect of PVA concentration, insulin concentration, and type of plasticizer on thickness, drug content, and disintegration time of films formulated. The composition of sublingual insulin films has been summarized in Table 1. Firstly, aqueous solution of 40% w/v PVA was prepared and further diluted with appropriate volume of 0.1N HCl to achieve required polymer concentration, prior to which respective amounts of insulin and plasticizer (e.g., sorbitol) were dissolved in 0.1N HCl. After vortexing and centrifuging, specific volume of the solution was then casted on to aluminum plate of film maker (Elcometer, Warren, MI). The dried films were then further characterized for thickness, drug content, and disintegration time. The thickness of the different ﬁlms was measured using a digital micrometer (Marathon, Ontario, Canada). Drug content was determined from films cut in 2 by 2 cm which were then dissolved in 5 ml of phosphate buffer solution (PBS, pH 6.8) and analyzed by HPLC. Disintegration time was measured by placing a ﬁlm of size 2 by 2 cm in a glass petri dish containing 5 ml of PBS and stirred at every 10-s time interval until the film disintegrated. Further, the films were characterized for its mechanical properties using TA-XT Plus Texture Analyzer (Stable Microsystems, UK), as well as in vitro dissolution was performed in PBS and simulated saliva. In addition, the drug loading was increased to achieve 10 IU in ﬁlm of size 2 by 2 cm by increasing the thickness of the film. Lastly, previously optimized concentrations of permeation enhancers were added, and in vitro permeation studies were performed for the optimized films.


Results: As per Table 2, it was observed that for formulations A2 and A3, the films could be formed and peeled off easily unlike formulation A1. Hence, 30% PVA was selected for further studies. Moreover, formulation A2 (same composition components as formulation B2) was selected for further studies based on lower disintegration time as compared to formulation B1. On the other hand, owing to sweet taste of sorbitol (formulation C3) and lower disintegration time as compared to formulations C1 and C2, formulation C3 was selected for further studies. Further, formulation C3 was characterized for its mechanical properties and in vitro dissolution in pH 6.8 and simulated saliva. In addition, 10 IU (i.e., dose of insulin) via sublingual administration (based on previous studies) was loaded in ﬁlm of size 2 by 2 cm by increasing the thickness of the film to 250 µm. In addition to in vitro dissolution, in vitro permeation flux of insulin in film was also found to be similar to solution formulation. This indicates that the formulated film on dissolution could behave the same as the solution which has shown hypoglycemic effect in vivo via sublingual administration in previous studies.


Conclusion: The present investigation suggests that PVA-based insulin film can be developed to administer insulin sublingually. 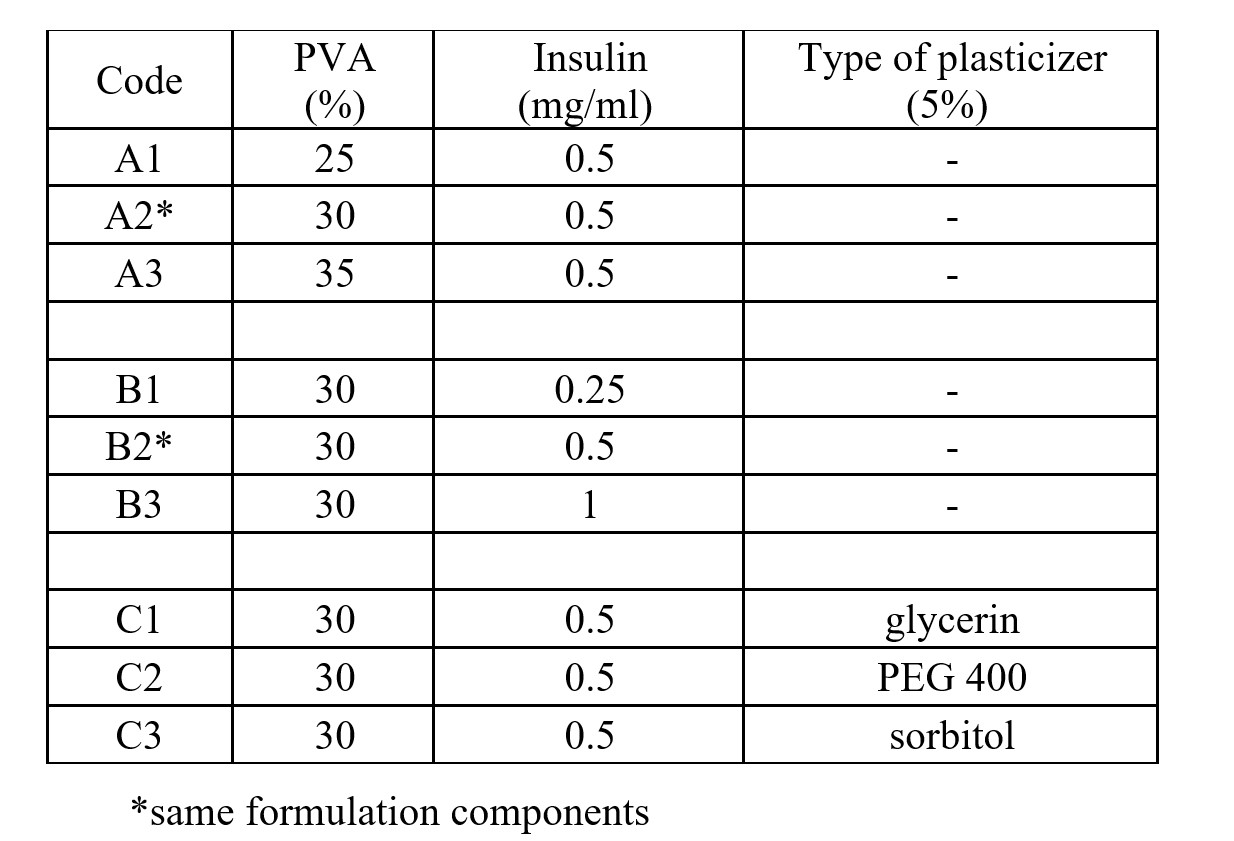 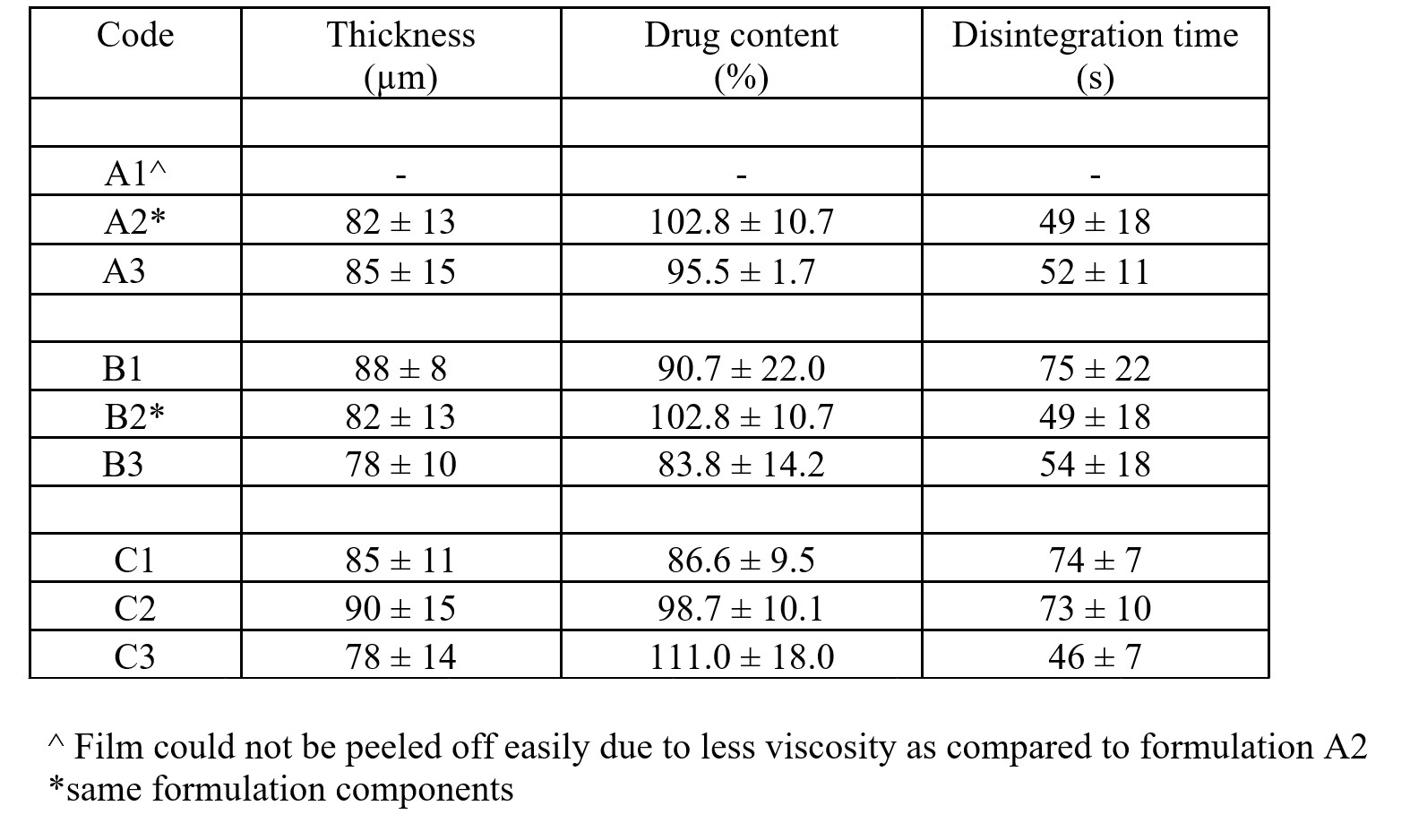