Purpose: Lung cancer is the second most common cancer in both men and women around the world, and 85% of it is non-small cell lung cancer (NSCLC). There were estimated 234,030 cases of lung cancer and 154,050 deaths from lung cancer in 2018. The prognosis of lung cancer is poor (< 10% 5-year survival rate for advanced NSCLC), which can be partly attributed to limitations in bio-models that screen for drug candidates against lung cancer. Traditionally, the most commonly used in vitro method for screening therapeutic drugs is monolayer cultures of cancer cells, which are convenient and of low cost. However, monolayer cell culture models are unable to reproduce many properties of solid tumors in vivo, such as the morphological features and the microenvironment including cellular heterogeneity, cell-cell interactions, and gradients of oxygen, pH, and nutrients. Consequently, many drug candidates would display activities in such models that later cannot sustain in animal and clinical studies, which increases the overall time and cost to develop viable anticancer medications. Alternative in vitro models based on three-dimensional multicellular spheroids (MCS) have been developed to better mimic features of lung cancer in clinic. Compared to monolayer cells, the multicellular spheroids can better simulate drug penetration and drug resistance in solid tumors. Therefore, multicellular spheroids represent a promising in vitro model to evaluate the efficacy of anticancer drugs.

The purpose of this study is to systemically assess the activity of a number of anticancer drugs in both the monolayer and the multicellular spheroids of the human NSCLC cells, A549. The data will then be compared to the clinical outcome of the anticancer drugs to assess the ability of MCS and monolayer cell cultures to predict drug efficacy against lung cancer in clinic.

Cisplatin and Carboplatin are indicated in NSCLC cancer but require much higher concentration to inhibit 50% of monolayer cell growth than Doxorubicin, which is not indicated in NSCLC cancer. Although the IC50 values in the monolayer cell model would suggest doxorubicin as a more promising drug than platinum drugs against lung cancer, the ratio of doxorubicin’s IC50 values in MCS over monolayers is as high as 21 folds, which is 10 times as high as the two platinum drugs, which are clinically indicated against lung cancer.


Conclusion: Multicellular spheroids of A549 cells serve as a substantially better model to predict drug efficacy against non-small cell lung cancer than their monolayers and should serve as a more common platform to screen for new drug candidates against lung cancer. 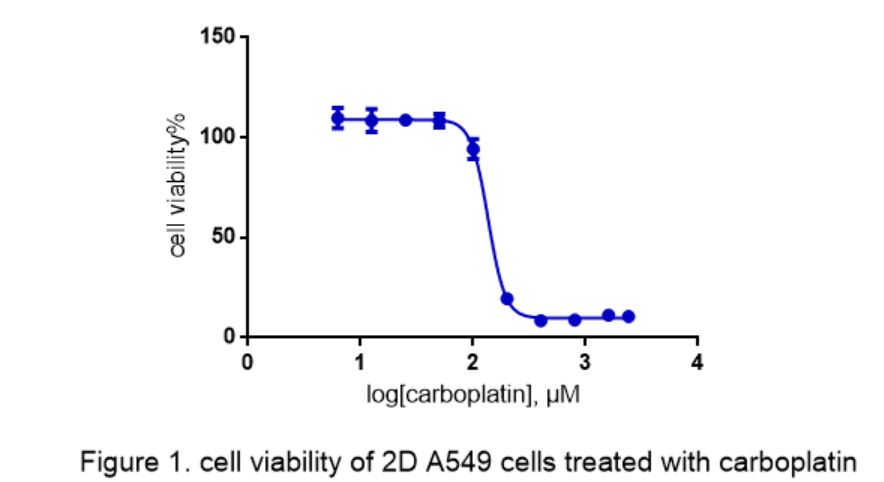 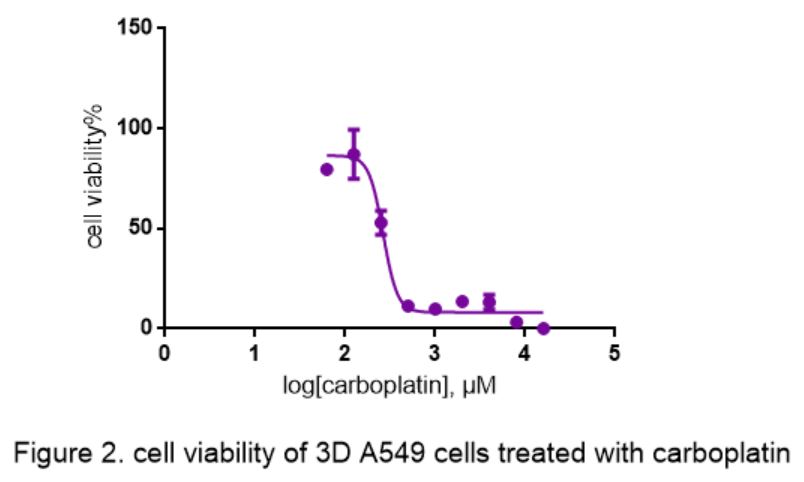