Purpose: The requirement for stabilized G protein-coupled receptors (GPCRs) in their native, functional form presents significant challenges for in vitro functional and structural characterization. Efficient solubilization of the receptor most often requires stringent extraction that compromises structural integrity and activity.  In addition, most activity assays must be performed immediately following solubilization of the receptor, with activity rapidly degrading over time. Our aim was to develop a simple method to efficiently solubilize active GPCRs that are stable outside of their native membrane environment.


Methods: Protein Extraction - Membrane Protein Extraction: 1x107 cultured cells or 50-100mg of tissue were washed in PBS, homogenized in 1mL of a hypotonic buffer, followed by an incubation at 4ºC for 15 minutes. Samples are then centrifuged at 16,000xg for 20 minutes.  The supernatant was removed, and the pellet was resuspended in extraction reagent for 30-60 minutes at 4ºC to solubilize membrane proteins. Insoluble material was removed by centrifugation at 16,000xg for 20 minutes and the supernatant containing the membrane proteins was collected.

Whole Cell Protein Extraction: 1x107 cultured cells or 50-100mg of tissue were washed in PBS, lysed in 1mL extraction reagent, and incubated for 30-60 minutes at 4ºC. After incubation samples were centrifuged at 16,000xg for 20 minutes. The supernatant containing the solubilized protein was collected.

Generation of styrene maleic acid co-polymer lipid particles (SMALP): 50-100mg of tissue were washed in PBS, resuspended in 1mL of DPMC, and incubated for 30 minutes at 37ºC in a sonicating water bath. After incubation 1mL of 2.5% polymer (SMA) was added to sample and equilibrated at room temperature for 1 hour. Samples were centrifuged at 40,000xg for 30 minutes. The supernatant containing the solubilized protein was collected.

Any extractions using commercially available reagents were performed according to provided product manual. For all above sample preparations, the remaining pellet was resuspended in 1 mL of RIPA Lysis Reagent and sonicated for 10 seconds at 50% Amps. Protein in each fraction was determined using the BCA Assay Kit.

Western Blot - Normalized samples were separated on a 4-20% Tris Glycine gel and transferred to nitrocellulose membrane via the Pierce G2 Fast Blotter.  Membranes were then blocked, incubated in primary antibody for one hour at room temperature or overnight at 4ºC, washed, incubated in secondary antibody for 30 minutes at room temperature, washed, and incubated for 5 minutes in Thermo Scientific SuperSignal™ West Dura Extended Duration Substrate.  Blots were then visualized on the Thermo Scientific iBright™ Imaging System.

Radioligand Binding Assay - M3 lysates were prepared from a GeneBLAzer expression cell line (Thermo Fisher Scientific). For the binding assay, extracts (400ug) were incubated with 3H-4-DAMP (PerkinElmer) alone or with Ipratropium Bromide and 3H-4-DAMP (competitive binding assay) for 75 minutes at room temperature. Free radioligand was then removed and bound radioligand was then quantified using a TRI-CARB 2000 TR scintillation counter.

Tissue lysates were prepared from frozen mouse brain (Pel-Freeze Biologicals). For the binding assay, extracts (600ug) were incubated with 3H-Adenosine (PerkinElmer) alone or with Adenosine (Sigma) and 3H-Adenosine (competitive binding assay) for 75 minutes at room temperature. Free radioligand was then removed and samples were then analyzed on a TRI-CARB 2000 TR scintillation counter.


Conclusion: Here we report: Using optimized ratios of detergent and stabilizer for GPCR extraction not only efficiently solubilizes GPCRs better than other methods (i.e. membrane prep, SMALP), but also stabilizes the receptor, enabling researchers to assess structure and function of receptors outside of the cell; Receptor stability is preserved immediately after extraction as well as extended during cold storage, when using a non-denaturing detergent to solubilize in conjunction with a stabilizer; amd With evolving techniques and technologies, such as native mass spectrometry and cryo-EM, extraction of a stable receptor will be essential. With the improved extraction efficiency, solubility and preserved activity obtained with this method, researchers will have a greater breadth and flexibility in their GPCR research and targeted therapeutic studies. 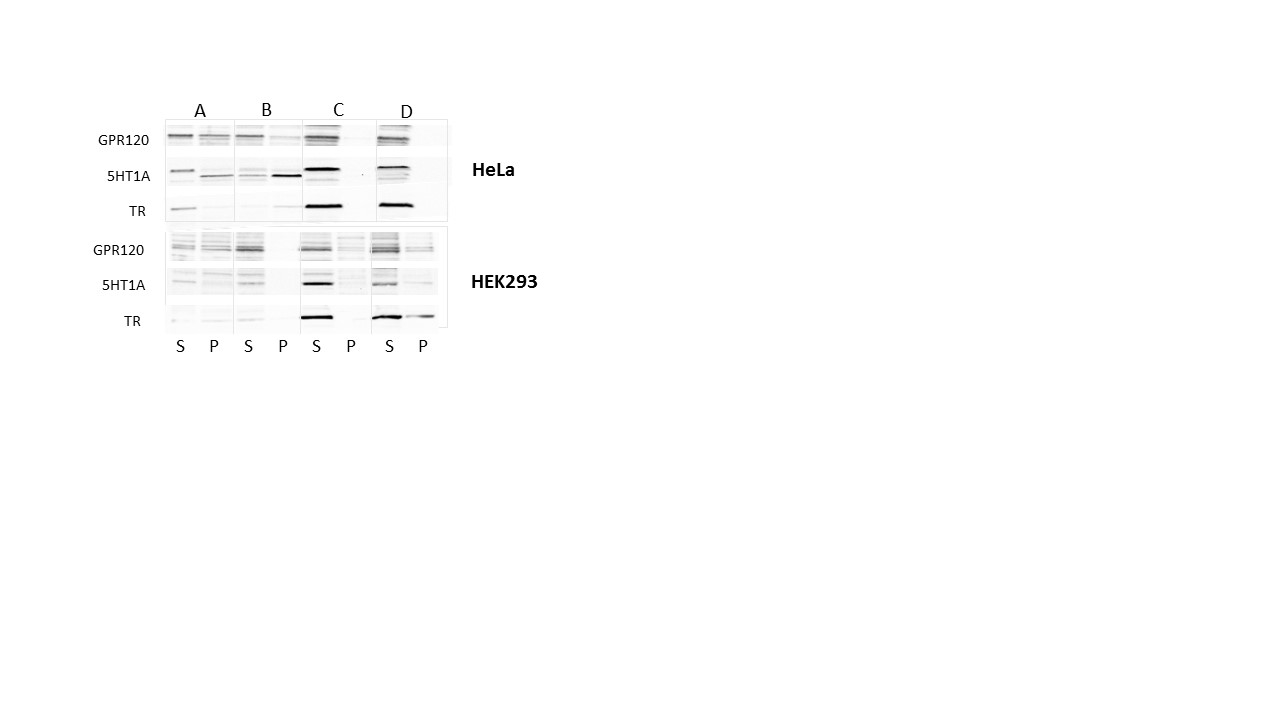 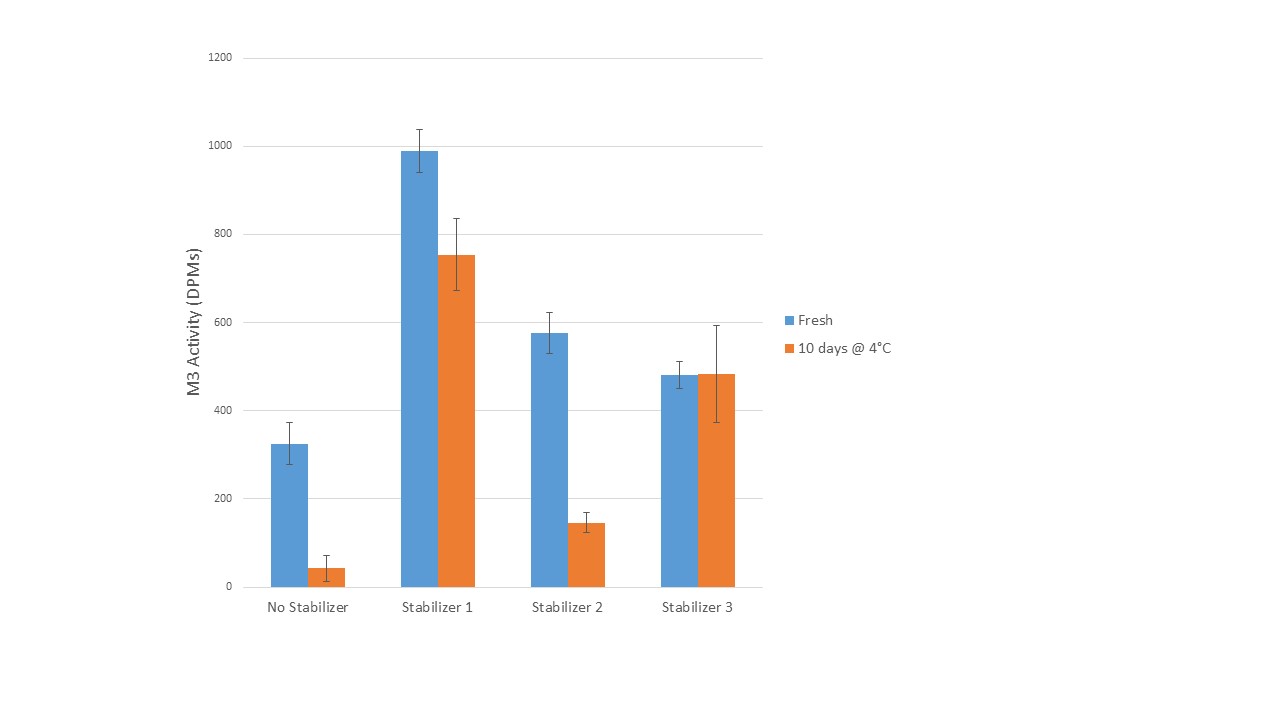 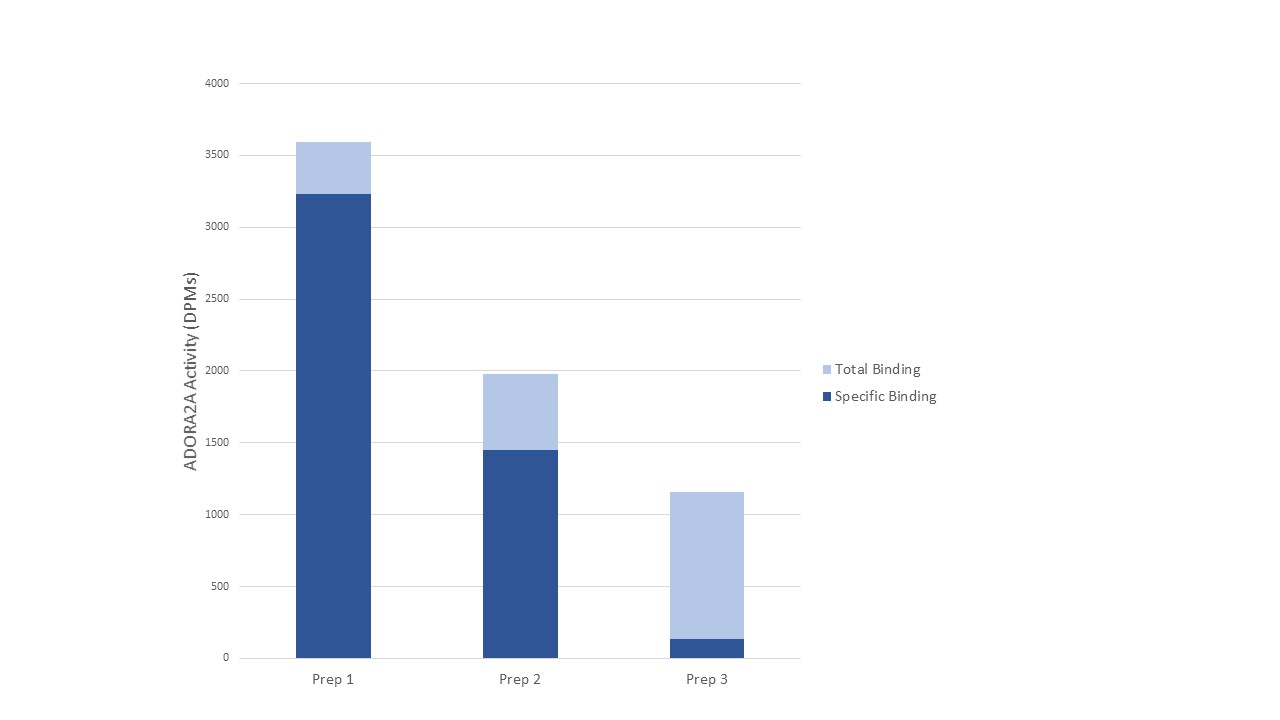