Purpose: The double emulsion (w/o/w) solvent evaporation method has been widely used for the fabrication of polymeric particles incorporating hydrophilic drugs. Since double emulsions was first introduced by Sefiriz et al., in 1925, it has been prepared using a high shear method or what is known as the “batch method”. This method lacks the control over the droplet size and can cause the disruption of the primary emulsion leading to lower encapsulation efficiency. Several research techniques were studied to generate double emulsions in uniform size and to aid in increasing the encapsulation and loading efficiencies of such particles. The fabrication of double emulsions in glass capillary devices has been shown to be one of the most efficient and lowest cost techniques. Much of the existing research done was on the droplet level, specifically how to generate uniform droplets. Less studies the comparison between batch and the microfluidics techniques for the same drug and more importantly how the uniform droplets translate into the hydrophilic drug loaded polymeric particles (PPs). The aim of this study was to compare the batch and microfluidic methods while investigating the influence of two variables: 1) drug to polymer ratio 2) surfactant concentration (PVA) in the inner water phase on the fabricated PPs encapsulating metformin hydrochloride (HCl), a model hydrophilic drug. We studied the metformin loaded PPs in terms of: encapsulation, loading efficiencies %, particle size, residual solvent % and the release profile.


Methods: Metformin loaded PPs were fabricated using both a  batch and a modified microfluidics method. Metformin HCl was dissolved in the inner water phase (W1), which was then sonicated in an organic phase (O) of 200 mg/ml poly-lactic-co-glycolic acid (PLGA) (50: 50) in dichloromethane (DCM). The effect of the drug: polymer ratio (1:4 vs. 1:10) and the concentration of the PVA (0% vs. 1%) in the inner water phase on the fabricated PPs was evaluated. The primary emulsion, in the batch method, was  added dropwise to a stirred outer water phase (W2) of 1%w/v PVA for 2-3 hours to allow for solvent evaporation and hardening of the PPs incorporating metformin HCl. While in the modified microfluidics method, the primary emulsion was injected as the inner phase at a flow rate of 0.05 ml/min using a 160 µm nozzle into a continuous outer phase of 1% PVA injected at 0.5 ml/min (Figure 1). The droplets were then left on the bench in the fume hood for 3 hours on a 10-15 ml layer of 1% PVA. Particles were then washed 3 times and lyophilized for further analysis. The loading, encapsulation efficiency and release profile of the particles (n=3) were assayed by stirring 10 mg particles in 1 ml phosphate buffer (pH= 6.80±0.05), stir at 200rpm, 37°c for 57 days. At predetermined time points, the aqueous phase to be withdrawn following centrifugation at 14000 rpm and finally replaced with a fresh solution. The supernatant was analyzed for metformin HCl using HPLC. The thermograms of the PPs were examined using DSC and he residual solvent % were analyzed using TGA. The morphology and particle size characterization were investigated using scanning electron microscopy (SEM). Finally, the pore size of particles were analyzed using BET pore size analysis using nitrogen gas.


Results: Microfluidics-based PPs showed approximately 4 times higher EE% and LE% at the higher (1:4) drug: polymer ratio and about 2 times higher at the 1:10 ratio as summarized in table 1. The batch derived PPs with lower drug to polymer ratio resulted in higher EE% and LE% compared to those where a higher drug to polymer ratio was used.  The batch PPs had an improved sustained release profile when compared to the microfluidics-based particles which suffered from burst release. The microfluidic derived PP size was larger and more uniform using microfluidics than batch derived PPs (Fig. 2). The DSC thermograms of the PPs showed the characteristic melting endothermic peak of metformin HCl with variable intensities that related to the loading efficiency of the PPs. The glass transition peak of the PLGA was indicated that no chemical interaction occurred during the preparation. The TGA analysis showed a loss of 1.77 % w and about 2.40%  for the batch and microfluidics based PPs respectively. The pore size analysis showed a pore size of 7.903A° for the batch process and a pore size of 9.844A° for the modified microfluidics process.


Conclusion: In this work, Metformin loaded PLGA PPs were fabricated using a double emulsion solvent evaporation method using two techniques: traditional batch and a modified microfluidics method. The PPs derived from the microfluidics method showed a significant increasing the encapsulation and loading efficiencies when compared with batch derived PPs. On the other hand, the release profile was more controlled from the batch derived PPs.  potentially due to the leakage of the small drug (metformin HCl) from the large channels in the microfluidic derived PPs. 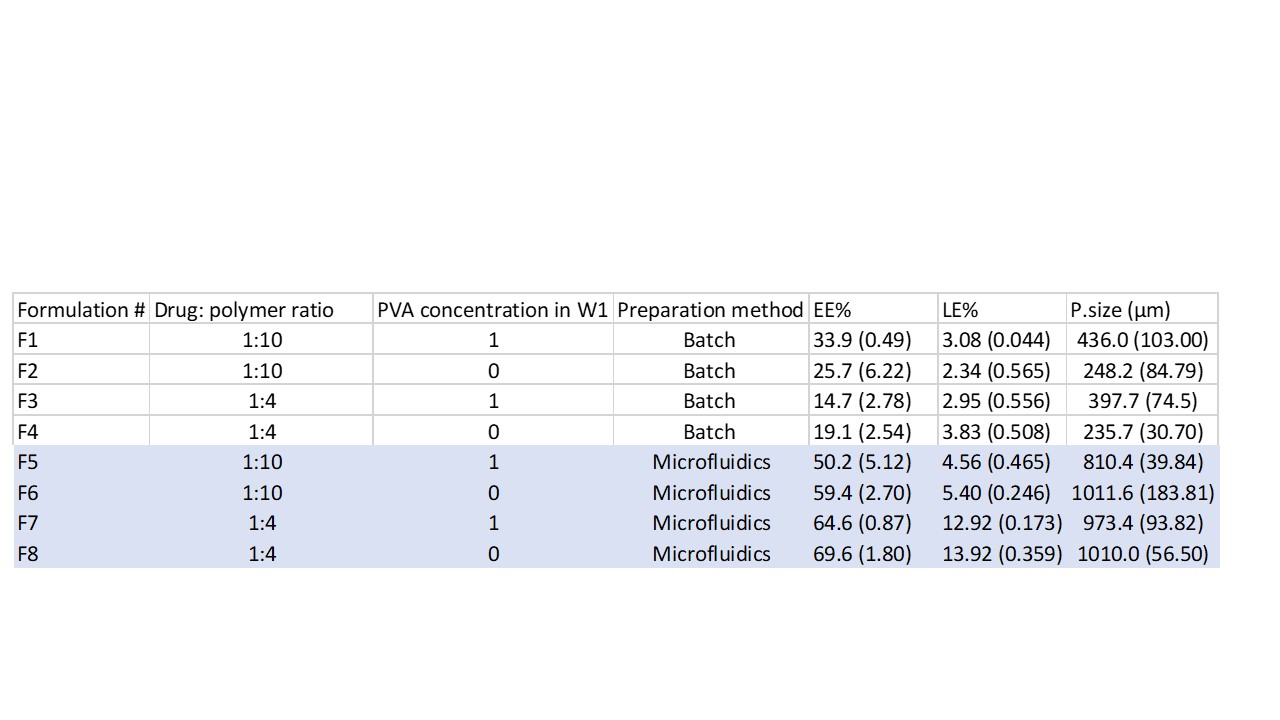 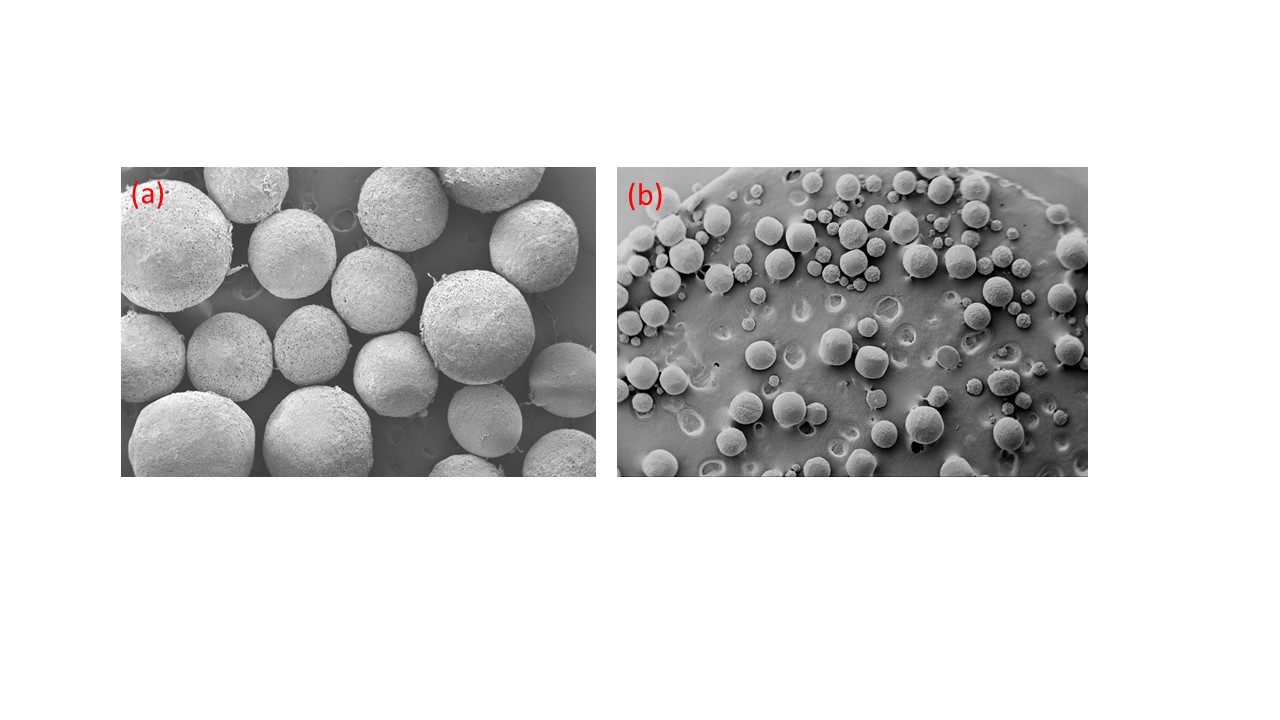