Methods: A clinical trial study was designed to compare a new drug (GC) with the placebo (control) and an existing drug (SP) for the safety and efficacy in more than 900 patients.  Clinical endpoints for drug safety and efficacy were collected at 0, 6, 12, 18, 24, 48 and 52 weeks.  Multiple omics data that include metabolomics, next generation sequencing (results not shown in this report) and single nucleotide polymorphisms (SNPs) were collected at 0, 12, and 24 weeks. Differently expressed metabolites were identified by profiling analyses via quality assessment, normalization and mixed model ANOVA. SNPs with low minor allele frequency were discarded prior to the Genome-Wide Association Study (GWAS), and a kinship matrix of patients was estimated to verify the levels of population structure. Finally, predictive analyses were performed for class and continuous safety and efficacy target variables having metabolomic and SNP data as predictors by different machine learning models and feature selection algorithms. We evaluated discriminant analysis, distance scoring, general linear models, k-nearest neighbor, logistic regression, partial least squares, partition trees, and radial basis machine models and finally narrowed down to 12 partition tree models with 5-fold cross validation model comparison (CVMC) run with 10 iterations.  For the class target variables, the area under the curve (AUC) of the receiver operating characteristic (ROC) curve was used as the primary measures for sensitivity and specificity. The accuracy measured was also estimated. For continuous target variables, the correlation between predicted and observed values of the target variable and Harrell’s C were used as the primary measures of precision. All analyses were performed in JMP Genomics, Version 9.1, SAS, Cary, NC.

Differently expressed metabolites: The metabolomics data were normalized to the median with a scale equivalent to the interquartile range (IQR).  Differently expressed metabolites were identified by mixed model ANOVA.  Hierarchical clustering of treatment by metabolites expressed yield two major clusters based on treatment (Figure 1). One cluster (to the right of the vertical line) includes the new drug (GC) at 12 and 24 weeks at two different doses: 32 mg and 48 mg, while the other cluster (to the left of the vertical line) includes baseline measurements and existing drug and placebo treatments at 12, 24 weeks.

SNP and trait association analysis: The estimated kinship matrix indicates that subjects in this clinical trial are genetically unrelated in large extent, except for two pairs of subjects.  These two pairs of subjects have Identical-By-Descent (IBD) values close to 0.5 that indicates they could be first degree relative: parent-offspring or full siblings (data not shown).  SNPs with significant effects on subjects treated by drug or not were distinguished by volcano plots (the x-axis has the estimate effect of the minor allele and the y-axis has the -log10 p-value). Figure 2, left plot, shows the volcano plot with those SNPs that have lower p-value highlighted. Figure 2, middle plot, shows the volcano plot with those SNPs that have both lower p-value and large effect estimate highlighted.  Figure 2, right plot, shows the histogram for the most significant SNP in the two levels (0 and 1) of the target variable.

A comparsion of 12 partition tree models via CVMC for the metabolomics data that contained 30 metabolites demonstrated that the accuracy and AUC were about 0.83 and 0.92, respectively, for the class target variable that indicate the drug effective or not, and the correlation and Harrell’s C were about 0.70 and 0.76, respectively, for the continous target variable with the drug efficacy measurements.


Conclusion: Different subjects show different responses to any drug.  The goal of scientists and medical doctors is to identify the right drug for a patient.  This report tried to do integrated analysis with the multiple -omics data and clinical data to evaluate if patients have the similar metabolites measurements profile and SNP trait association when treated with placebo, existing drug, and new drug. Partition trees models built with 30 metabolites can predict the drug efficacy at reasonable rates. 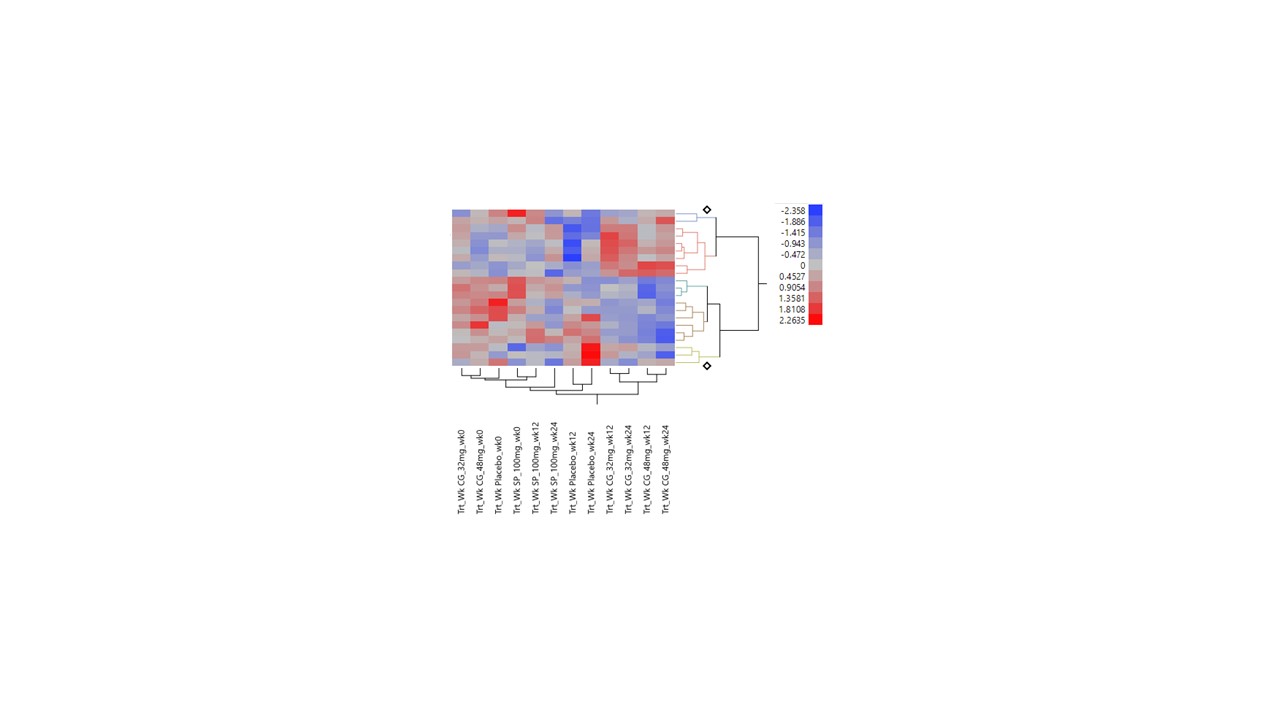 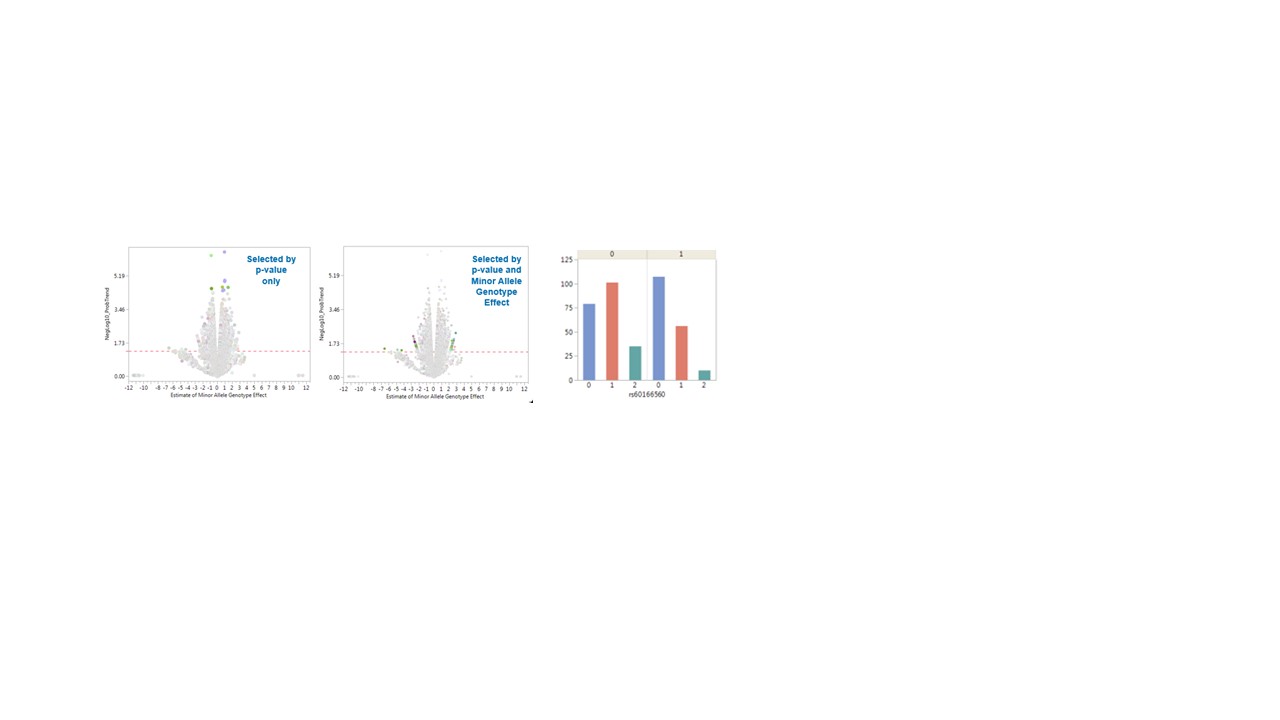 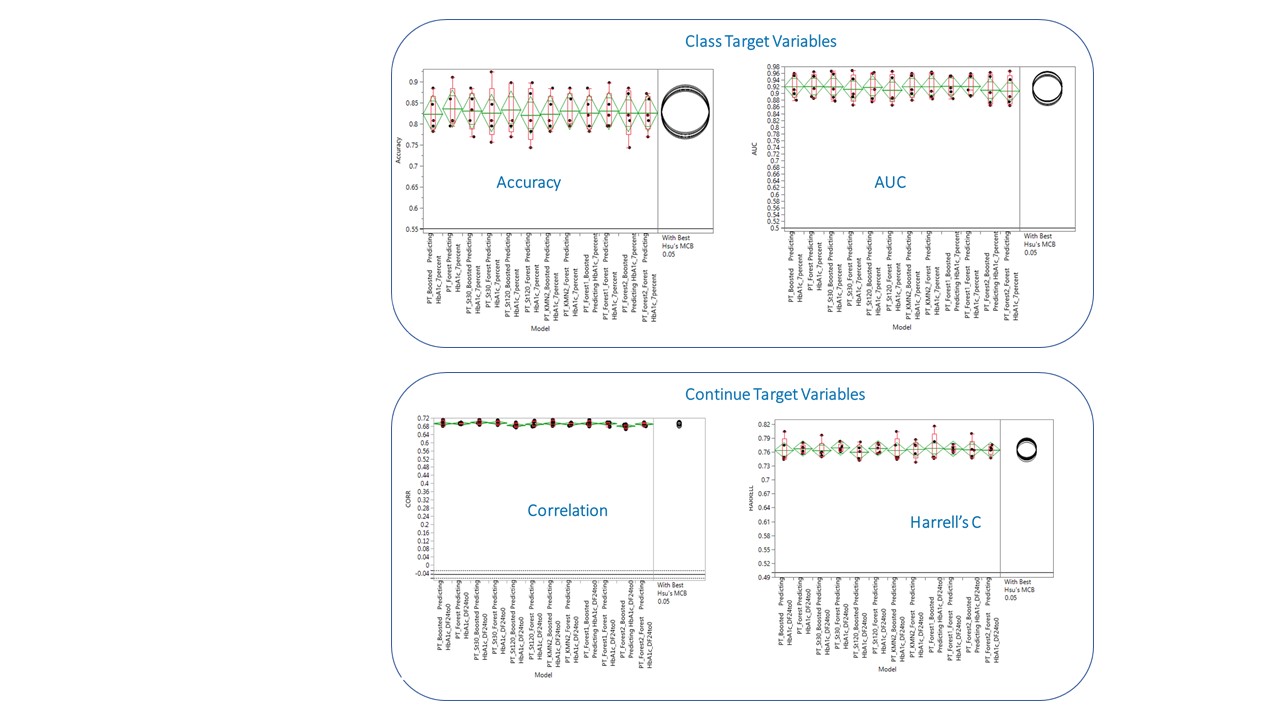