Purpose: The effect of sodium chloride (NaCl) and sodium citrate (NaCit) on the mechanical properties (hardness, burst test, %seal) and shell dissolution of oil based soft gelatin capsules was evaluated through a full factorial design as function of the salt concentration and the type of gelatin. A previous screening with mono and divalent salts used as pharmaceutical excipients was carried out to select the salts in a range of concentration that do not affect negatively the viscosity and the film properties of the gelatin formulation.

Previous studies have reported the effect of salts addition on the properties of gelatin gels or gelatin solutions. This study was aimed to determine the effect of the selected salts on the properties of the gelatin masses and some quality attributes of the softgels as well as to conclude about the gelatin formulation with the best performance in process and stability conditions.


Methods: Viscosity, bloom strength and clarity of the gelatin masses were determined as a screening criteria to select the salts for testing. Gelatin formulations were prepared according to the design of experiments resulting in 10 encapsulation trials including blank samples. Hardness, burst test and % sealing of softgels were determined following the standard testing procedures of the industry. Rupture time was measured by the method described in the current USP and the time for total disintegration of the capsules was considered as reference. ANOVA was applied (UnscramblerTM v.10) to determine the effects and their interactions.


Results: ANOVA results are summarized in Table 1. It shows that for fresh dried capsules the gelatin type is significant to the mechanical resistance and the salt type is significant to hardness as well as the interaction for salt and salt type. Rupture time was not significant for any of the studied variables at initial time. It is remarkable since rupture time is a critical attribute and at initial time it was not dependent on gelatin type, salt or salt concentration.

Gelatin type A and type B have been well characterized in literature, but a comparison of the mechanical properties of their soft capsules such as the burst test or the % of sealing has not been reported. It was found as expected, that the lower the % sealing, the lower the mechanical resistance of the softgels. Figure 1 shows the burst test results as function of the input variables where the highest hardness values correspond to gelatin type B.

Figure 2 shows a bar diagram comparing the hardness values of the tested systems at initial time and 3 months 40°C, 75% RH. Systems added with NaCl were not measured at stability because of clumping. At initial time, all the samples met the hardness reference value (7-9N) with exception of the formulations NaCl at 4%. At stability conditions, softgels containing NaCl at 2 and 4% clumped and got melted. Salt added softgels also showed a decrease in hardness in all the cases, but in general the values were higher for gelatin B type formulations, probably due to crosslinking effects. The effect of high moisture and salt presence has been discussed by some authors. Some studies (Elysee-Collen and Lencki, 1996) have reported that adding salts to gelatin systems increases its water absorption and modifies its structure probably due to a direct competency among the protein and the salt for the water of hydration. NaCl was found to decrease the bloom value of commercial gelatins since it probably breaks or avoids the hydrophobic and hydrogen bonding or modifies the structure of liquid water in the net. (Choi and Regenstein 2000). In contrast, the results for shell moisture content of the stability samples did not show a correlation between moisture content in the shell and disintegration times.


At stabililty conditions, it is known that the crosslinking potential of a gelatin depends on its molecular weight distribution and the content of high molecular weight chains. Results showed a high crosslinking potential for type B gelatin with a 50% increase on the disintegration time at 1 month (40°C, 75%RH) and regardless the salt content in all the cases. For gelatin type A softgels containing NaCit there was not an increase on disintegration times at stability conditions  as it was observed for the blank sample (up to 20%).


Conclusion: Gelatin type A formulations added with sodium citrate met the criteria for mechanical resistance and kept the disintegration times of softgels at 3 months (40°C, 75% RH) comparable to the initial time. 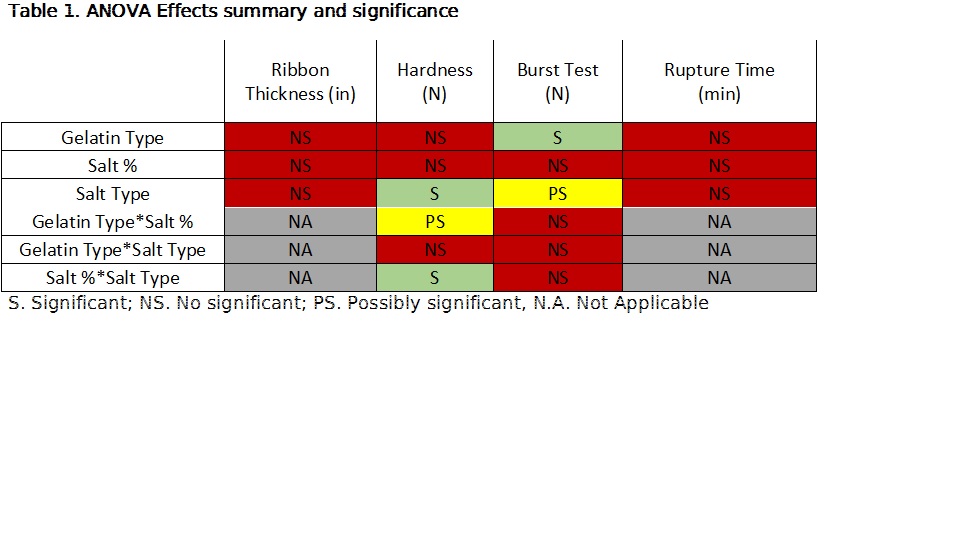 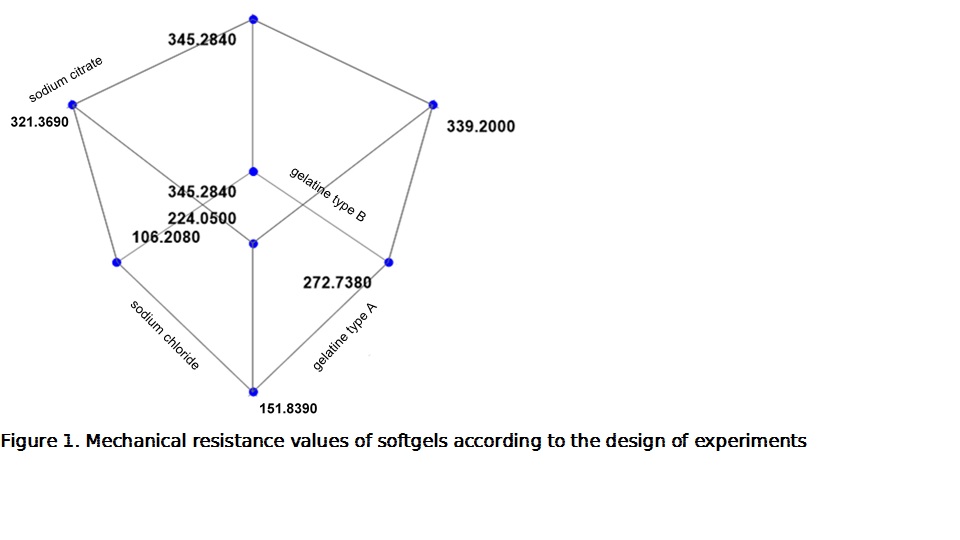 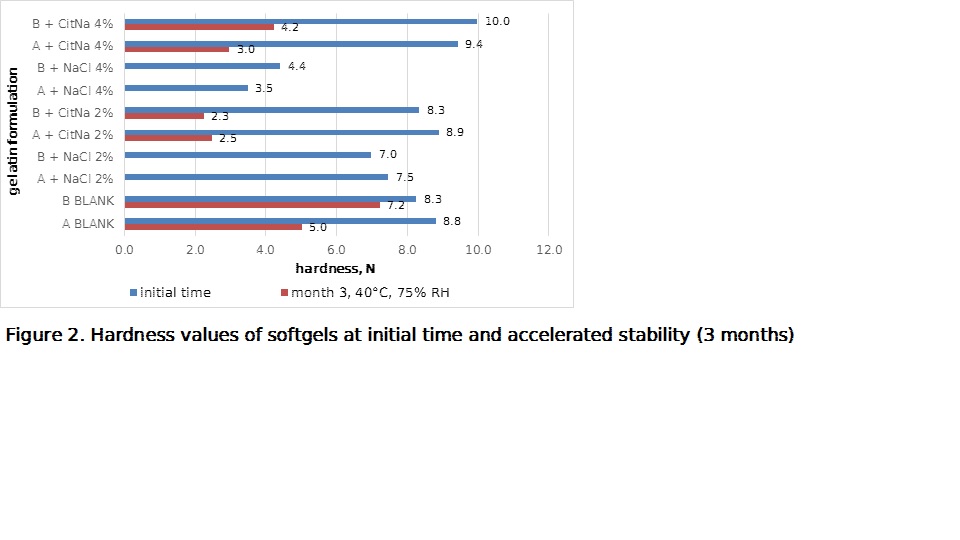