Purpose: Microparticles, in the size range from 1 to 1000 um, offer significant advantages as drug delivery systems, involving protection on the encapsulated APIs, controlled release and enhanced bioavailability.[1-3] However, conventional manufacturing of microparticle dosage forms typically involves the use of solvents and hence suffers from additional solvent removal procedures and undesirable solvent residue levels.[4] In this work, fused deposition modelling (FDM) 3D-printing was utilised, as a solvent-less means, to prepare a felodipine (FD)/ hydrochlorothiazide (HCTZ) fixed-dose combination tablet where FD was encapsulated in poly(caprolactone) (PCL) microparticles. The FD loaded microparticles were designed to suspend within a hydrophilic matrix where HCTZ was embedded. It is anticipated that after oral ingestion, the outer matrix will offer immediate release of HCTZ whereas the suspended microparticles offer an extended release for FD. The influence of printing parameters on product qualities (such as microparticulate dimension, drug release behaviour) were investigated to confirm the capability of 3D printing in microparticulate manufacturing.


Methods: A MakerBot Replicator II 2X 3D printer equipped with two thermal extruders was used for the printing of microparticle loaded tablet. PCL filament (10 % FD) and Eudragit EPO filament (10 % HCTZ, 10 % PEG 6000, 10% PEO N10, 5% MCC, 15% Tween 80) were prepared from HAAKE Minilab extruder. Microparticle was printed from PCL filament, while EPO filament was applied to the printing of outer shell and inner layers. The microparticle loaded tablet was designed by Autodesk Inventor, with micro-voids inside that could help with the disintegration of the tablet, as shown in the Figure 1. The surface morphology and cross-sectional microparticle distribution were examined using scanning electron microscopy (SEM) and Raman mapping. In-vitro dissolution study was performed using USP TYPE II dissolution apparatus followed by quantification via high pressure liquid chromatography (HPLC).


Results: PCL filament and EPO filament showed good flexibility and mechanical strength for 3D printing. FD-PCL microparticle with minimum size (~ 450-550 um in length) could be printed in cuboid structure design (0.41 x 0.01 x 0.05 mm, from Autodesk) via a 0.15 mm nozzle. The constraints in microparticle printing was investigated under the use of nozzle in different size (0.15 mm, 0.40 mm in diameter), geometry structure (cube, cuboid, disk shape) and particle intervals. The ultimate printable microparticle dimension limitations were determined to be 0.41(l) x 0.41(w) x 0.41(h) mm for cubes and 0.41(h) x 0.81(d) for disks, with the latter inevitably resulted in larger particle sizes. Good separation resolution between adjacent particles was confirmed when the printing interval was set at 2 mm or greater. Once the interval was reduced to 1 mm or less, the deposited particles tended to “bridge-connected” along the printing path. The maximum number of microparticles loadable to a pre-set tablet dimension was then determined based on the above constraints and the maximum printable drug loading in each individual microparticle was also investigated. Examination of the tablet cross sections showed even distribution of the microparticles, as intended. The in-vitro drug release study confirmed the immediate release profile for HCTZ from the outer matrix, as well as a sustained release pattern for FD from the suspended microparticles, in the final successful formulations.


Conclusion: A novel microparticle loaded tablet was successfully developed from FDM 3D printing, which allowed the immediate release of one drug from the tablet outer shell and inner sandwich layers. The sustained release of a second drug from the directly printed and loaded microparticles was also achieved. The printing limitations including the minimum printable particle size, printing intervals, and drug loading, were established for the design. This study highlighted that the potential directly assembling of tailorable dosing single tablet with bi-phase drug release profiles can be achieved via hot-melt extrusion and FDM 3D printing. On demand drug release profiles were also amendable through the design of voids within the outer shell and inner sandwich layers. 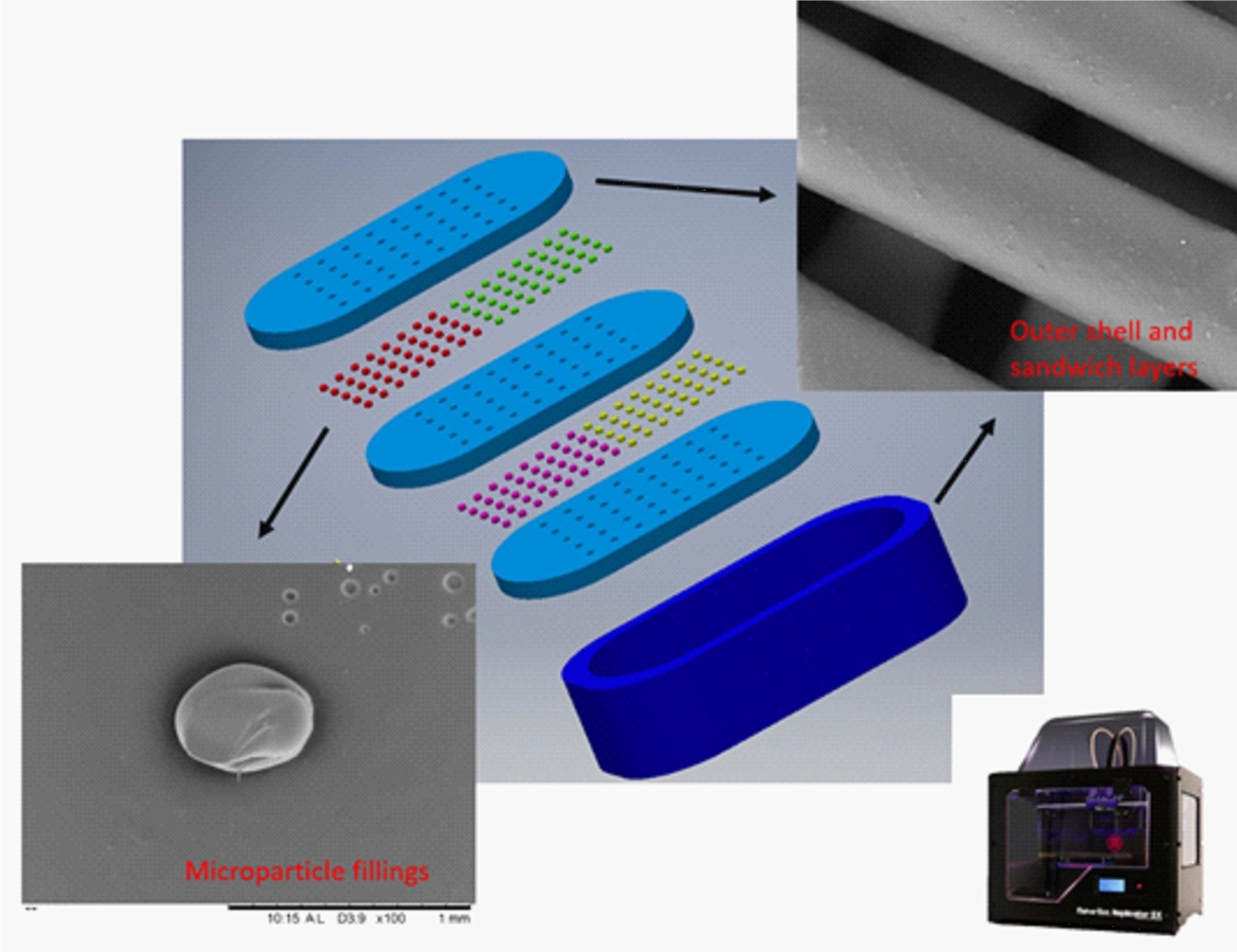