Purpose: In the US, deaths from accidental or intentional sleeping overdoses have increased exponentially. Around 70 million of the American population is affected by sleep problems. Due to the side effects associated with benzodiazepines, “Z-drugs” have become more popular. However, Z-drugs at higher doses has a potential for abuse due to its euphoric effect. Further, many people consume sleeping pill with alcohol which not only intensify the effect but cause severe side effects including suppression of the respiratory system and heart rate and may also lead to blackouts and indulging in sleep walking. We proposed a very unique and innovative strategy to address this issue. The proposed project is aim to develop a technology to prevent multi-pill and alcohol related accidental and abusive use of sleeping pills. So far, there are no reports describing such concept.


Methods: Due to limitations of procurement of Zolpidem tartrate (agonist) and flumazenil (antagonist), we used model drug molecules with physicochemical similarities; Metoprolol tartrate in place of Zolpidem tartrate and hydrochlorthide in place of flumazenil. Agonist and antagonist loaded polymeric filaments were prepared using hot melt extrusion (Process 11, ThermoScientific, MA). Filaments of agonist was prepared using pH sensitive polymer and filaments of antagonist was prepared using water insoluble/ethanol soluble polymer at 160°C. Effect of drug loading and polymer ration was optimized. Solid state characterization of pure components, physical mixture, crushed filaments were performed using DSC, XRPD and TGA. Drug content within the filament was determined using HPLC. Both filaments were crushed and sieved. To determine the release of antagonist prior to tableting, milled filaments were dispersed in 250 ml each of Fasted state simulated gastric fluid (FaSSGF) and pH 6.8 buffer. To enhance the euphoric effect abusers usually consume sleeping pills with alcohol. Hence the milled filaments were also dispersed in 250 ml each of FaSSGF+20% alcohol, FaSSGF+40% alcohol. Amount of alkalizing agent required to raise the pH above 5 (in case of multiple pill abuse) was determined in 250 ml of FaSSGF. Both the sieved filaments were compressed into tablets along with an alkalizing agent, binder and a superdisintegrant using single punch Carvar press. The tablets were characterized for hardness, friability, disintegration time. Dissolution studies of single (one pill in dissolution jar) and multi-dose (more than 5 pills in dissolution jar) tablets were carried out using USP dissolution apparatus 2 in 250 mL each of FaSSGF, FaSSGF+20% alcohol, FaSSGF+40% alcohol, pH 6.8 buffer. Further release studies tablet in various beverages including beer, wine and whisky are under investigation.


Results: Both the filaments were clear, monophasic and easy to extrude. Absence of characteristic melting endotherm in DSC thermogram and sharp crystalline peaks in XRPD patterns indicated the amorphization of agonist and antagonist within polymer respectively. TGA analysis indicated that the processing temperature of HME did not have any effect on stability of agonist and antagonist. The drug content for was found to be >95%. The alkalizing agent used to prepare tablets was calcium carbonate since it quickly raised the pH >5 (Table 1). The tablets hardness was found be 5±1.2 kg and had negligible friability. Drug loading and composition (ratio of water permeable to water impermeable polymer) of have significant effect of release of antagonist in the presence of ethanol. Finally, batches with 1% antagonist loading was optimized based on target product profile i.e. difference between release of antagonist in the presence and absence of ethanol. As shown in Fig. 1, within 3 h, antagonist release was 3 times higher in presence of alcohol than in FaSSGF. At the same time, single pill showed complete release of agonist but dissolution of 5 pills (at the same time) showed negligible release of agonist. It suggested that on overdose, more than 5 tablets, agonist will not release. Consumption of multiple pills ( >5) raised the stomach pH >5, at which polymer is insoluble. Most importantly, very minimal release of agonist or antagonist was observed at pH 6.8. Thus, based on release study we can say that during regular consumption in patient (without alcohol) antagonist will not be released because it is entrapped in water insoluble polymer while agonist will be release completely as individual tablet contain very small amount of alkalizing agent to raise the pH.


Conclusion: In this research work, a very unique and innovative strategy was successfully developed to prevent multi-pill and alcohol associated abuse of sleeping pill. Formulation was developed using polymer chemistry and particle engineering to prevent release of drug — agonist in case of overdose and simultaneous release of antagonist in case pill is consumed with high amount of alcohol (alcohol dependent antagonist dumping). We concluded that release of agonist stopped in case of overdose while substantially high antagonist release when pill exposed to alcohol. Technology to prevent sleeping pill abuse/misuse or accidental ingestion has tremendous potential from both clinical and commercial point of view. 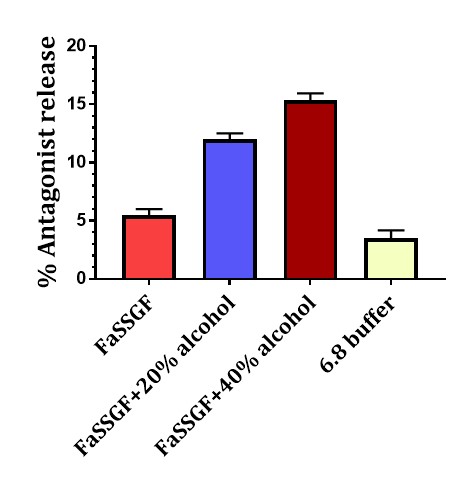 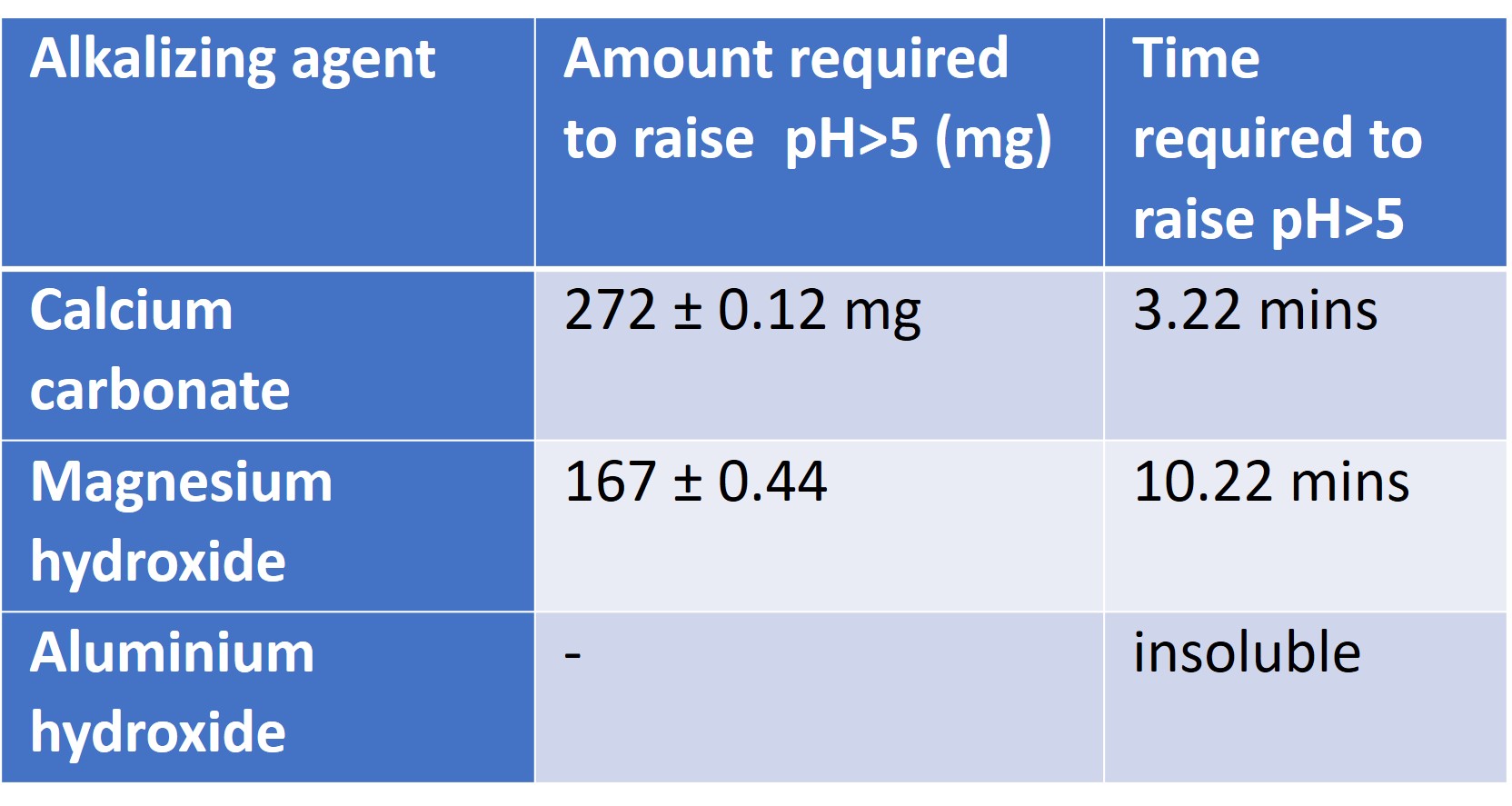