Purpose: To evaluate artificial membrane Strat-Μ™ for in vitro transdermal permeation experiments as an alternative to the application of excised human dermis, using diclofenac (DCL) and rivastigmine (RVS) as model drugs. Furthermore, the possibility of establishing in vivo-in vitro correlation, using literature in vivo data was also performed


Methods: Commercially available topically applied dermal formulations of diclofenac and transdermal patch of rivastigmine were used in the in vitro permeation studies. Experiments were performed using Franz-type diffusion cells with either Strat-Μ™ or human excised dermis (HED) as permeation barrier. Human dermis was excised using Klingman’s thermal separation method. The receptor medium was phosphate buffer (pH 7.4) and was kept under continuous magnetic stirring, thermostated at 32 °C with a thermostatic water bath. The assembled cells were left to equilibrate for 15 min at 32 °C before introducing the commercially available products of either DCL (Voltaren® Emulgel® and Dicloplast®) or RVS (Exelon® TTS 9.5mg/24h) on the donor compartments and were protected from light during the 24h experiment. At specified time intervals (2, 4, 8, 12 24h) 1.5 ml of the diffusion medium was withdrawn from the receptor compartment and replaced by equal volume of fresh receptor medium to maintain sink conditions. DCL and RVS concentration in the receptor compartment was measured applying a UV-HPLC method. An in vivo-in vitro exercise was also performed using the Phoenix® WinNonlin IVIVC-Toolkit and literature in vivo data for both DCL and RVS.


Results: It was found that permeation of DCL and RVS using StratM™ artificial membrane exhibited good linearity (R2 >0.99) and lower variability compared to HED from all products containing either DCL or RVS (%RSD >7.5). Linear relationships were observed when %DCL and %RVS permeated through StratM™ were plotted against %DCL and %RVS permeated through HED, respectively (Fig. 1). However, DCL permeation was overestimated while RVS underestimated when StratM™ was used as permeation barrier compared to HED. The IVIVC exercise revealed linear relationships (R2 >0.93) in all cases (Fig.2). However, DCL permeation was underestimated while that of RVS was overestimated with both StratM™ and HED permeation barriers compared to the literature in vivo data.


Conclusion: StratM™ was used as permeation barrier in Franz cell to study skin permeation of DCL and RVS from commercially available topically applied pharmaceutical products. StratM™ performance was proven linearly related to that of HED as well as with the in vivo skin absorption data taken from literature. The results of the present study could be considered promising and further experiments are needed to better understand the performance of StratM for predicting diffusion in skin permeation experiments 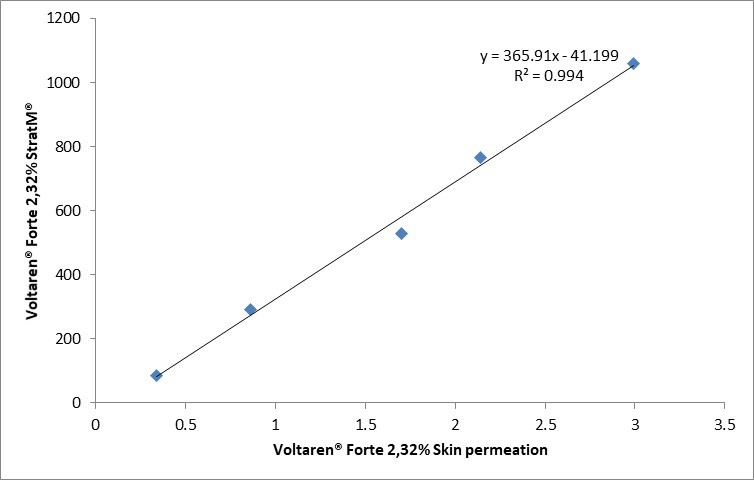 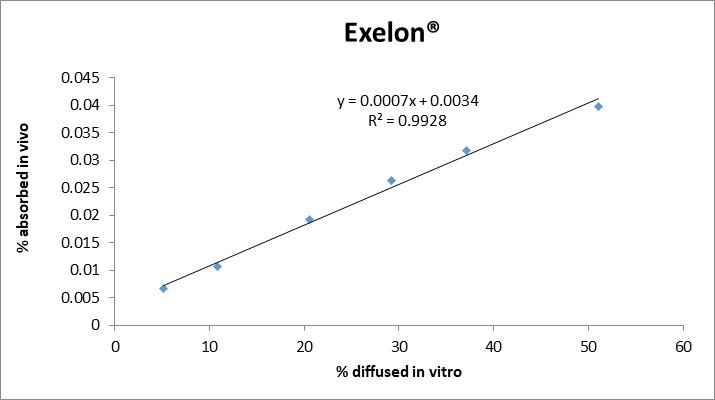