Purpose: The development of insulin and its analogs has played an important role in diabetes treatment as alterations in sequence and formulation have been exploited to develop short and long acting therapy options. To facilitate further design of analogs with greater stability, a thorough evaluation of insulin degradation products is required. Insulin can undergo both physical degradation, such as aggregation and fibrillation, as well as chemical degradation including deamidation of AsnA21 and AsnB3. Additionally, oligomers can form from transpeptidation between the A and B chain, and disulfide interchange reactions can be initiated by cleavage of the CysA7-CysB7 bridge. This poster presents a thorough approach to characterizing insulin degradation utilizing multiple strategies; intact, A/B chain, and Glu-C digested analysis. The procedure has been optimized for chromatography, MS, and data mining parameters. In addition, the entire data set can be analyzed in one batch utilizing a single HPLC column and mobile phase.


Methods: Human insulin was forced-degraded in 0.1% formic acid at 60° C for 10 days. Insulin was reduced and alkylated using triethylphosphine and iodoethanol,and digested with Glu-C enzyme. All degradation products for intact, A and B chain and digested analysis were separated on a reverse phase column. Degradation products were evaluated by high resolution mass spectrometry (Q Exactive Plus). Data was mined using Proteome Discoverer and BioPharma Finder.

Intact insulin was reduced using triethylphosphine at 60 °C (pH 10) for 1 hour to form the A and B chain. Reduced A and B chains eluted at 3.2 and 4.4 minutes respectively on the BioResolveTM HPLC column utilizing a gradient from 25-30% acetonitrile. Independent optimization of collision energy was required for the A/B chain analysis to obtain representative MS2 spectrum for proper identification of modified peptides. Deamidations were identified on AsnA18, AsnA21, AsnB3 and GlnB4.

Digestion of insulin with Glu-C for 1 hour at pH 7.0 resulted in cleavage of 2 disulfide peptides. The MS2 spectrum for Glu-C Peptide A verified that deamidation was at AsnA21. PSMs for Glu-C digested Peptide B identified both 1X and 2X deaminated products. However, the MS2 fragmentation pattern of this peptide did not allow confirmation of the deamidation sites for the B chain. Reduction and digestion of insulin resulted in Glu-C cleavage peptides (Reduced 1-4) and one mis-cleavage product (Reduced 5). Reduced 2 did confirm deamidation on both AsnB3 and GlnB4. The missed-cleavage product from this same digestion (Reduced 5) confirmed deamidation on AsnA18.


Conclusion: Degradation of human insulin was investigated using a multi-pronged HRMS approach. All evaluations for intact, reduced, and digested peptides were conducted on a single BioResolveTM RP mAb Polyphenyl column (Waters) accomplishing separations for degradation products in a single batch. Degradation products identified included deamidations on AsnA18, AsnA21, AsnB3 and GlnB4. These were detected in the A and B chain analysis and verified using digestion with and without reduction. The major degradation product in acid/heat degraded insulin solutions was a 1X deamidation, 43% of the fractional abundance of intact samples. Additional peaks correlated to possible ammonia loss (-17), and addition of 39 Da consistent with deamidation and aldimine modification at both PheB1 and LysB29. Future work includes optimization of fragmentation and software parameters to further characterize degradation products. In additon, we would like to extend this work to include peptide and protein metabolism studies. 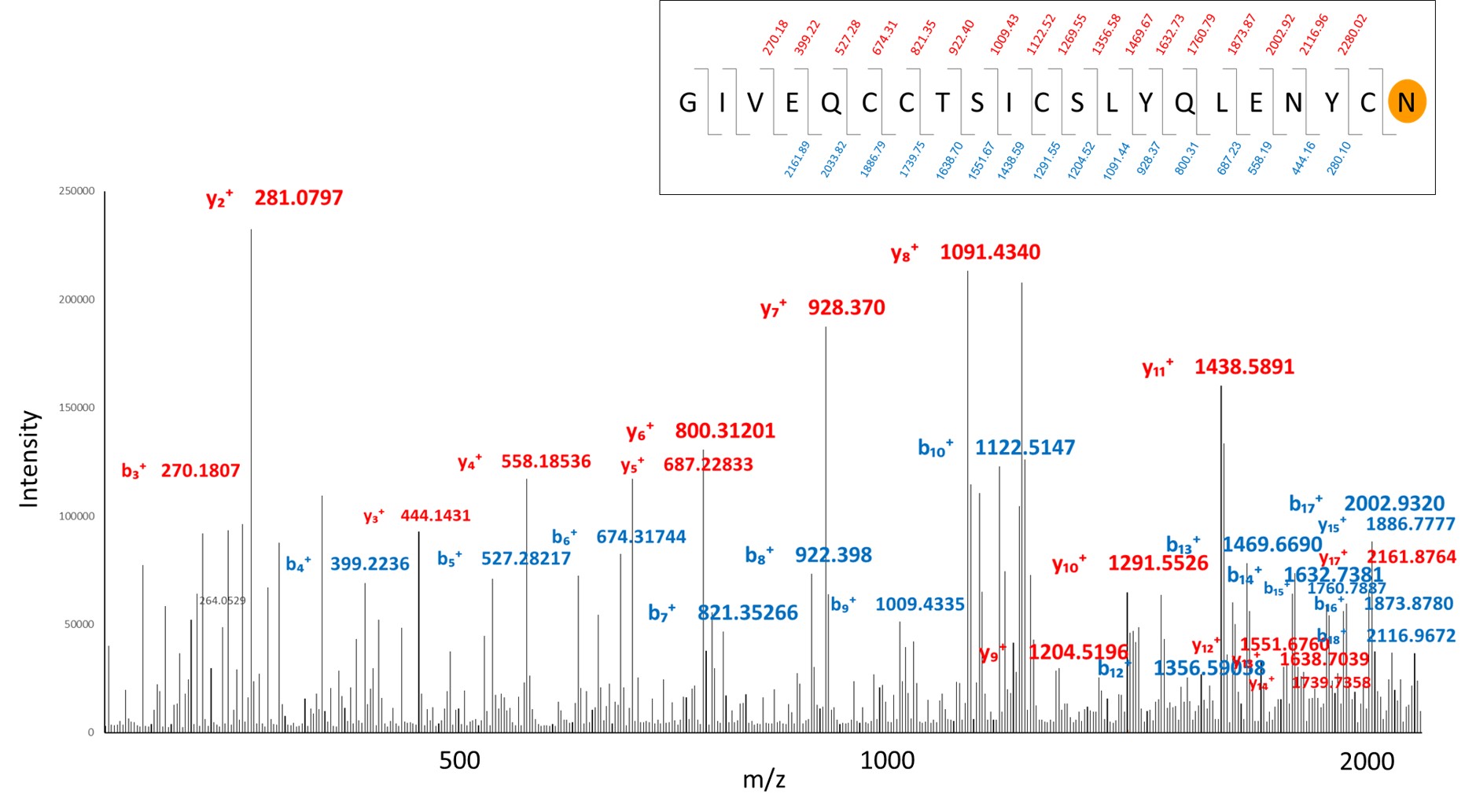