Methods: HPMA-biotin, HPMA-PLA (1) and HPMA-PLA-biotin (HPLA-BT) conjugates were synthesized and BTZ was encapsulated to fabricate nano-assemblies, PMC. HPMA-PLA was conjugated using DCC, DMAP and to this copolymer, biotin was conjugated via thionyl chloride in two steps. The synthesized conjugates were characterized by 1H-NMR, 13C-NMR, and FT-IR. The DLC, DEE and in vitro release studies were determined using dialysis method in phosphate buffer saline (pH 7.4). Hemolytic toxicity study was performed in human RBCs and cytotoxicity studies were performed against cancer cell lines (2).


Conclusion: HPMA-PLA-biotin was successfully conjugated, and PMC were prepared. In vitro release studies, cytotoxicity studies resulted into favorable delivery of BTZ using PMC approach. A sharp reduction in the IC50 value of the drug was encouraging for BTZ-HPLA-BT PMC than the pure drug. Further treatment of MCF-7 breast cancer cells with the prepared formulation in cellular uptake study (Figure 3) revealed that the higher uptake of formulations may be due to the biotin tethering and surface modification characteristics that enhanced the selectivity and targeting of formulations efficiently than the non-tethered biotin formulation such as HPLA PNPs. The in vivo kinetics results inferred the increase in bioavailability, half-life, and decrease in clearance rate confirmed the increment in the retention time of the formulations. 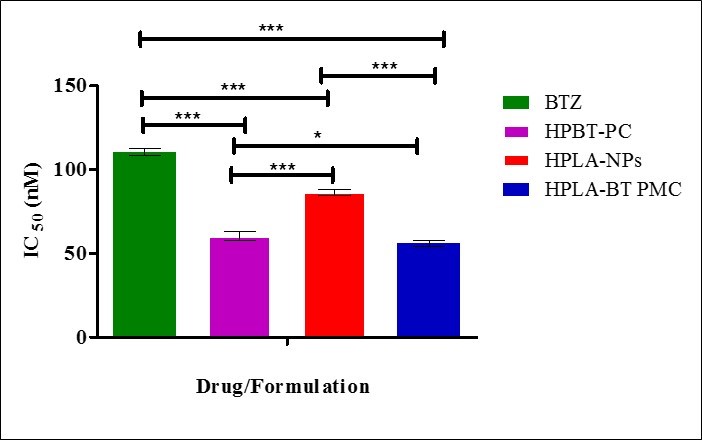 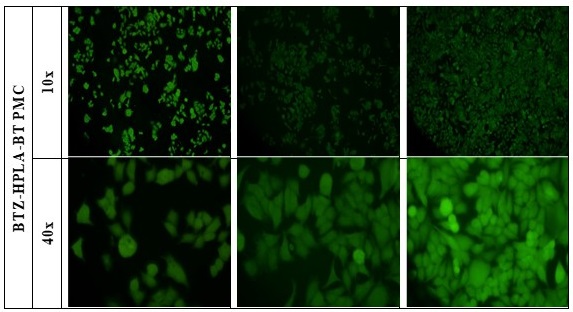