Purpose: The applicability of lipid-based self-emulsifying drug delivery systems (SEDDS) in enhancing oral bioavailability of poorly water-soluble drugs is diminished due to the poor solubility of drugs in lipid excipients. To enhance the drug loading in lipid-based systems and to improve self-emulsification, large amounts of surfactants and co-solvents are incorporated into the system, making these delivery systems essentially “lipid-flavored” rather than “lipid-based”. Incorporation of such large amounts of surfactants and co-solvents poses several problems like failure to retain drug solubilization invivo, evaporation of certain cosolvents thereby leading to drug precipitation on storage, local intestinal cytotoxicity and interaction with capsule shells. The aim of the current study was to formulate a safe and effective SEDDS with enhanced drug loading possibly without the use of co-solvents, for oral delivery of poorly soluble drugs. In the present study, a long-chain fatty acid (oleic acid) was incorporated in SEDDS to enhance drug loading of poorly soluble weakly basic model drugs Cinnarizine and Ritonavir. The lipid phase in the optimized SEDDS consisted of end-products of triglyceride digestion, i.e. a fatty acid and monoglyceride, to bypass the complications arising out of invivo lipid digestion. The optimized SEDDS was tested on Caco-2 cells for cytotoxicity and permeability enhancement.


Methods: The solubility of model drugs was determined in each test vehicle and formulation at 25ºC. One gram of preconcentrate containing model drug (~80% of equilibrium solubility) was dispersed in 250 mL media in USP II apparatus at 50 RPM and 37ºC and analyzed for particle size and drug release. Five-day Caco-2 cultures were used to assess cytotoxicity of dilute preconcentrates by MTT Assay. The permeability studies were done on 21-day caco-2 cultures grown on filter membranes.


Results: The optimized SEDDS contained glyceryl monooleate-oleic acid-Tween 80-Cremophor EL (22.7:27.3:25:25 w/w), with the lipid phase representing the digested end-products of glyceryl trioleate. The solubility of Cinnarizine and Ritonavir in SEDDS was 102.16±2.61 mg/g and 24.78±1.65 mg/g respectively. Replacing the oleic acid with triglyceride (glyceryl trioleate) in the formulation, reduced the solubility of Cinnarizine and Ritonavir to 21.1 ±0.8 mg/g and 6.9±0.2 mg/g respectively. The dispersion testing was done at pH 2 for 2h and then the pH was changed to 6.8 with phosphate buffer with a final concentration of 3mM sodium taurocholate (fasted state bile concentration) in the dispersion medium and continued for further 2h. The dispersion test samples were filtered through 0.45micron filter and showed a drug release of ~95% for Cinnarizine and ~80% drug release for Ritonavir at pH 6.8. The unfiltered samples showed 100% drug release and no drug precipitation was observed throughout the test period, which was confirmed by absence of pellet on centrifugation of samples. The average particle size of SEDDS for Cinnarizine and Ritonavir was 132nm and 230nm respectively. Ritonavir-loaded SEDDS dispersed better when directly added to pH 6.8 phosphate buffer containing 3mM sodium taurocholate showing ~100% drug release after filtration through 0.45 micron filter. Both the model drugs in pure form are practically insoluble at pH 6.8. The optimized formulation was well tolerated by caco-2 cells up to 5mg/mL with >80% cell viability, as compared to neat surfactant combination of Cremophor EL-Tween 80 (1:1) at 5mg/mL (~50% cell viability) as shown in Fig.1. Oleic acid alone was toxic to caco-2 cells but in combination with glyceryl monoleate it was found to be non-toxic (Fig.1).


Conclusion: SEDDS containing triglyceride digestion end-products was formed using sufficiently high lipid-load without the use of co-solvents. Presence of oleic acid in the formulation enhanced the solubility of model drugs by hydrophobic ion-pairing. As low as 3mM sodium taurocholate dramatically improved the emulsification. Formation of colloidal species during lipid digestion can be used to improve the performance of SEDDS containing long-chain lipids and possibly avoid the use of co-solvents. The optimized system shows great promise of enhancing the permeation and cellular uptake of Ritonavir (a P-glycoprotein substrate), studies for which are in progress. Also, further studies are being undertaken to understand the interactions between oleic acid and drug when the SEDDS are dispersed in different dispersion media in the presence and absence of sodium taurocholate. 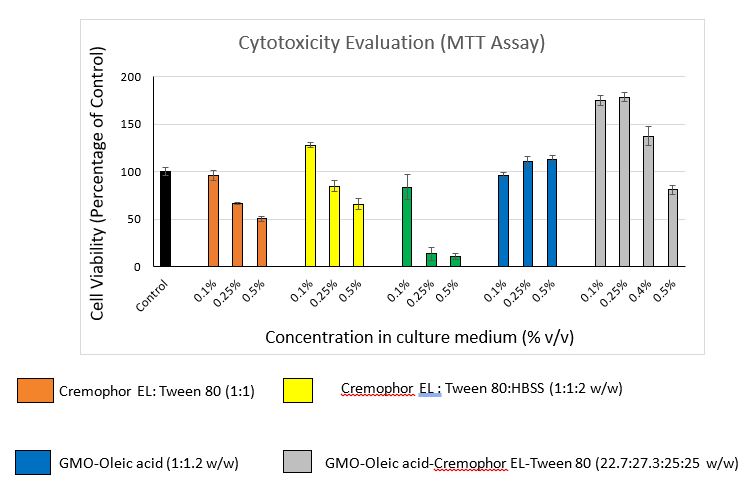 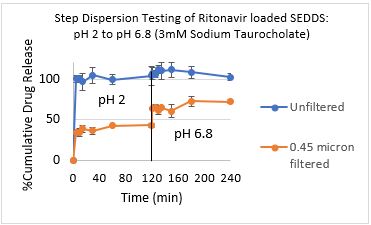 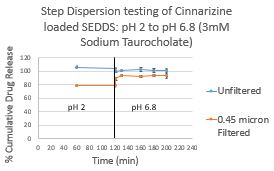