Purpose: The [3.3.1]azabicyclic A/E-rings in the hexacyclic norditerpenoids isolated from Aconitum and Delphinium are key to the biological activities of these alkaloids due to their changeable conformations and attached functional groups. A rare 1H NMR effect of steric compression has been demonstrated.1 Moreover, a [3.3.1]oxabicycle has been designed and synthesized following a procedure by Mannich.2 Studying the conformations revealed by both NMR spectroscopy and single-crystal X-ray diffraction afforded a better understanding of their 3D shapes. These results are applicable to norditerpenoid alkaloid bioactive natural products as the shapes of the compounds determine their bioactivities.


Methods: Double-Mannich reactions were used to synthesize the azabicycles and then derivatives 2,4-DNP, HCl and MeI were prepared. The oxabicycle, a tetrahydropyran ether, was synthesized by treatment of tetramethylolcyclohexanol with dry gaseous HCl under melting conditions.2 NMR spectra including: 1H, 13C, COSY, HSQC, HMBC, NOESY were recorded on a Bruker Avance III 500 MHz spectrometer at 25 oC. Data for X-ray single crystal structures were collected on a RIGAKU SuperNova at 150K.


Results: 1H NMR spectroscopy of [3.3.1]azabicyclic analogue 1 (Fig. 1) showed large differences between equatorial and axial δ7-H (CDCl3, Δδ7-H = 1.32 ppm) that were also displayed in other solvents (CD3OD, d6-DMSO). NOESY correlation data were obtained (Fig. 2). The 2,4-DNP derivative was also prepared from this ketone in order to obtain a crystal structure 2 which showed a chair-chair conformation (Fig. 3). On acidification of 1, hydrochloride salt 3 also showed a large difference between δ7-H signals in d4-acetic acid, indicating that this salt adopted the chair-chair conformation in solution; its crystal structure exhibits a typical boat-chair shape (Fig. 3). In N-ethyl and N-methylated quaternized ammonium analogue 4, the piperidinium ring adopted a boat-conformer and the N-ethyl sterically compressed 7-Ha. The O-atom of [3.3.1]oxabicycle 5 can also lead to the 1H NMR effect of steric compression (CD3OD, Δδ7-H = 0.81 ppm), displayed in different solvents (d6-DMSO and d6-acetone), but the scale of this compression was decreased when the compound was dissolved in D2O (D2O, Δδ7-H = 0.59 ppm) possibly due to H-bond formation. This decreasing effect caused by D2O was also observed in the reduced diol 6. The large difference between axial and equatorial 7-H (CDCl3, Δδ7-H = 1.11 ppm, also observed in CD3OD and d6-DMSO, was reduced (D2O, Δδ7-H = 0.45 ppm) when this azabicycle was dissolved in water.


Conclusion: The rare 1H NMR effect of steric compression is not only caused by nitrogen lone-pair electrons, but also by lone-pair electrons of other heteroatoms, e.g. oxygen, and intramolecular proton and methyl can also lead to steric compression in solution. Protonated [3.3.1]azabicycle adopted a different conformation in the solid phase and solution. We acknowledge some financial support from the University of Bath. 1. Winstein, S.; Carter, P.; Anet, F. A. L.; Bourn, A. J. R., The effects of steric compression on chemical shifts in half-cage and related molecules. ‎J. Am. Chem. Soc. 1965, 87, 5247-5249. 2. Mannich, C. and Brose, W. Dtsch. Chem. Ges. (A. B. Ser.) 1923, 56, 833-844. 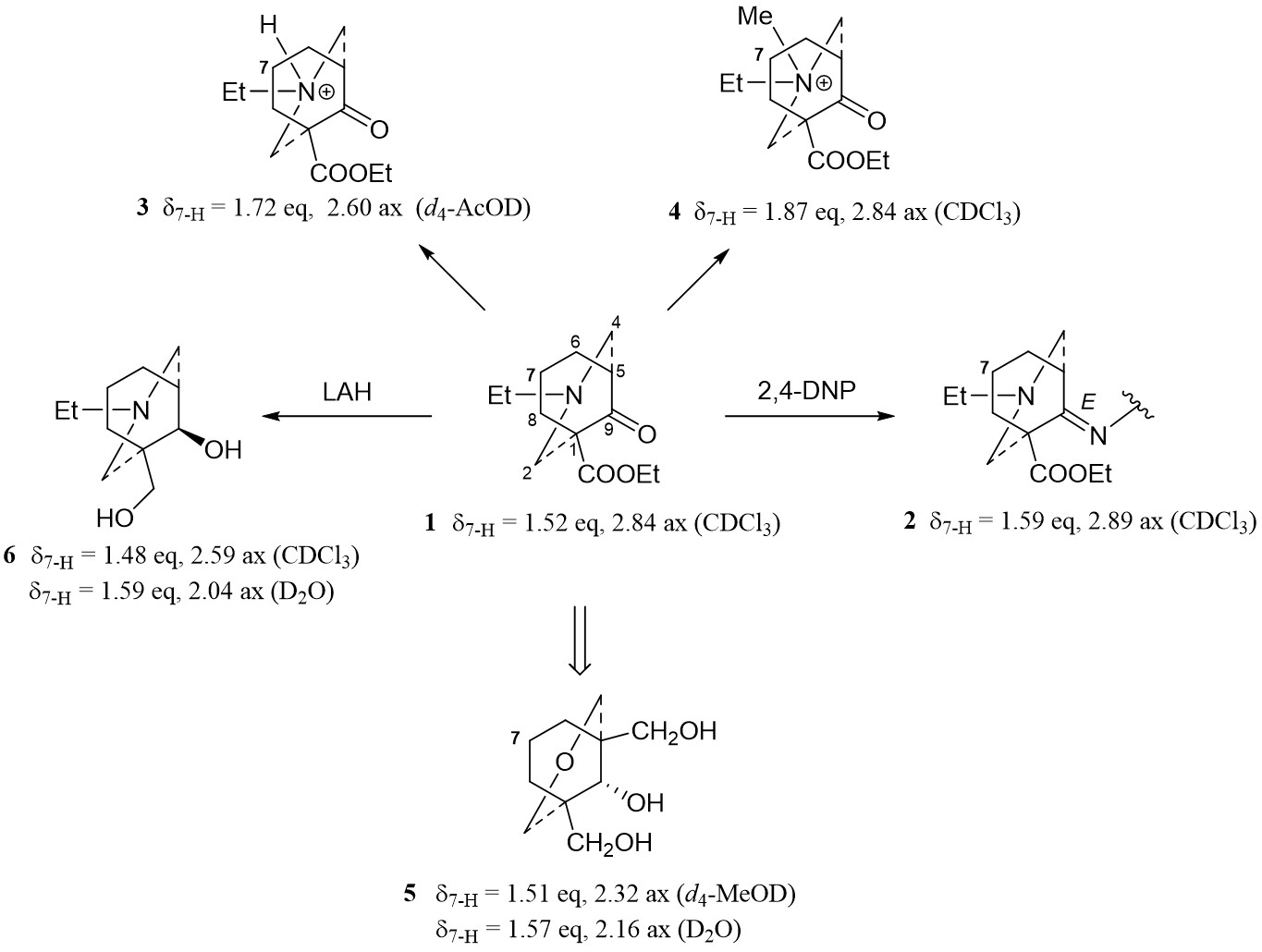 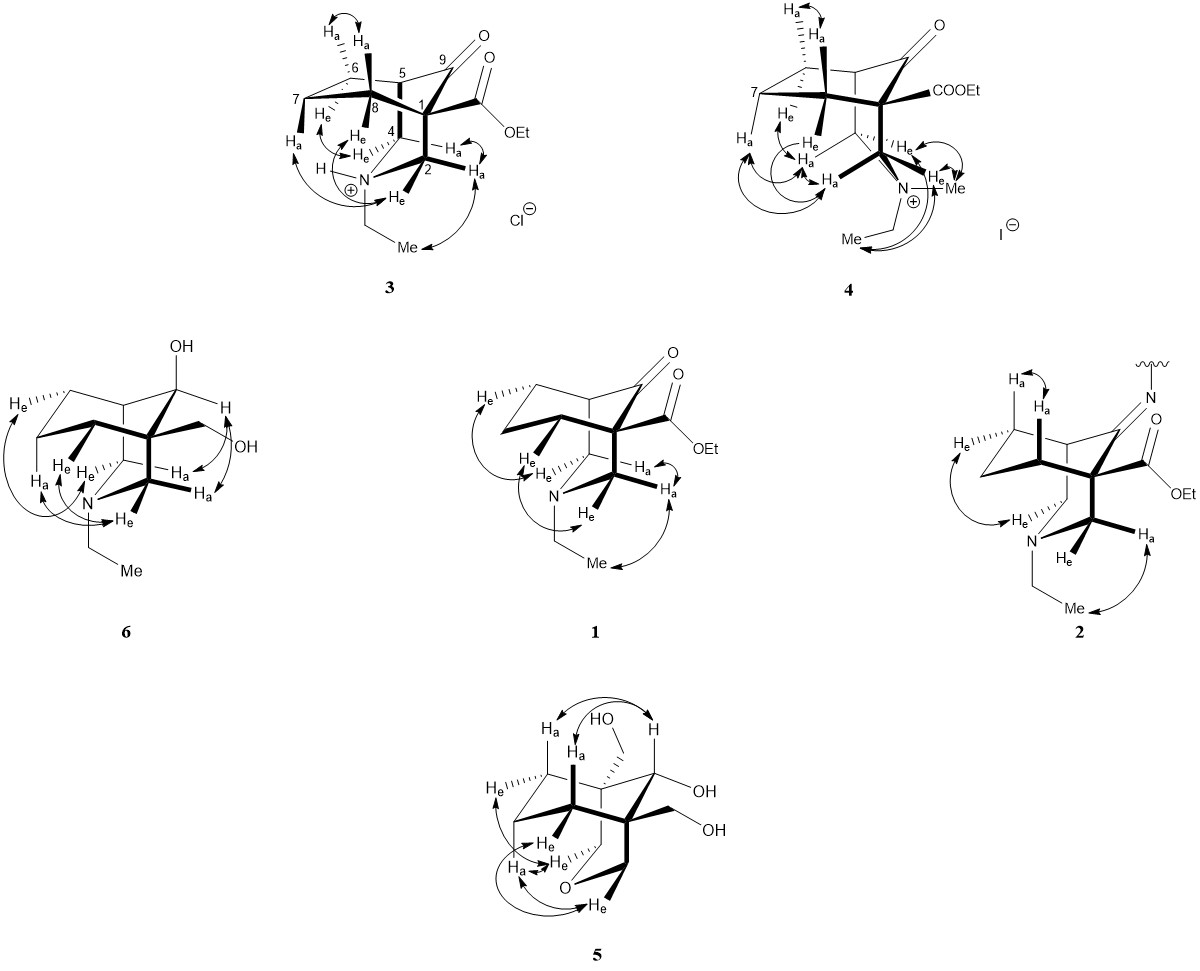