Purpose: Human immunodeficiency virus (HIV) infected individuals display an enhanced production of reactive oxygen species (ROS). This reduction in the antioxidant capacity in host tissues has been related to the decrease in the total levels of ROS scavengers such as glutathione (GSH). Prevention of opportunistic infections due to weakened immune system is a key strategy along with HIV elimination. Research in these directions is clearly warranted, especially combinations and co-delivery of antiretrovirals and antioxidants for improved intracellular uptake, targeted delivery of drugs to the viral reservoirs and strategies to ameliorate oxidative stress. We therefore aimed to formulate the antiretroviral drug, efavirenz (EFA) in presence of GSH using liposomes, as these carriers can be engineered to enhance the ability to reach the target reservoirs. The objective of the present study is to formulate liposomes loaded with efavirenz with and without GSH and evaluate the influence of GSH on the physico-chemical characteristics and in vitro release profile of efavirenz.


Methods: Liposomes were formulated using thin film hydration, lipid phase comprising of phospholipid, cholesterol, and efavirenz were dissolved in chloroform: methanol mixture along with Tween 80. Organic solvents were removed by vacuum evaporator and the deposited lipid film was hydrated with appropriate volume of water and unilamellar liposomes were obtained by subjecting the dispersions to probe sonication. Lipids evaluated were hydrogenated soya phosphotidylcholine (SPC) (E1), dimyristoyl phosphatidylcholine (DMPC) (E2) and distearoyl-glycero - phosphocholine (DSPC) (E3) along with cholesterol. GSH was added in the aqueous phase during the lipid film hydration (EG1, EG2 and EG3).
Liposome Characterization: Centrifugal ultrafiltration was performed using Nanosep 300K (MWCO 300 kDa) at 15,000 RPM at 60C for 10 min. Encapsulation efficiency (%EE) of EFA was indirectly determined by measuring the unentrapped drug using HPLC. After suitable dilution, particle size and z - potential (ZP) were measured by dynamic light scattering and laser Doppler electrophoresis, respectively using a Nanosizer (Malvern Instruments, UK).
In vitro dissolution testing
Liposome Suspension – using type IV apparatus CE7-smart (SOTAX®): EFA release was examined using 1% SLS as dissolution medium at 370C for 24 hours. Briefly, Liposome suspension containing EFA (with and without GSH) was placed on the top of the layer of beads in the dissolution flow through cells with a diameter of 12 mm. Samples were collected at different time intervals into the fraction collector and analyzed using HPLC.
Quantification of EFA using HPLC: Using Agilent 1260 Infinity attached to autosampler and PDI detector, samples were analyzed using acetonitrile: water as mobile phase (pH adjusted to 3.2 with formic acid) at a flowrate of 1 ml/min at 250C at 247 nm; injection volume was 10 µL.


Conclusion: Presence of GSH did not alter the properties of EFA when loaded into liposomes. The selected formulations could be further be taken up for in vivo evaluation and measure its effectiveness in amelioration of oxidative stress. 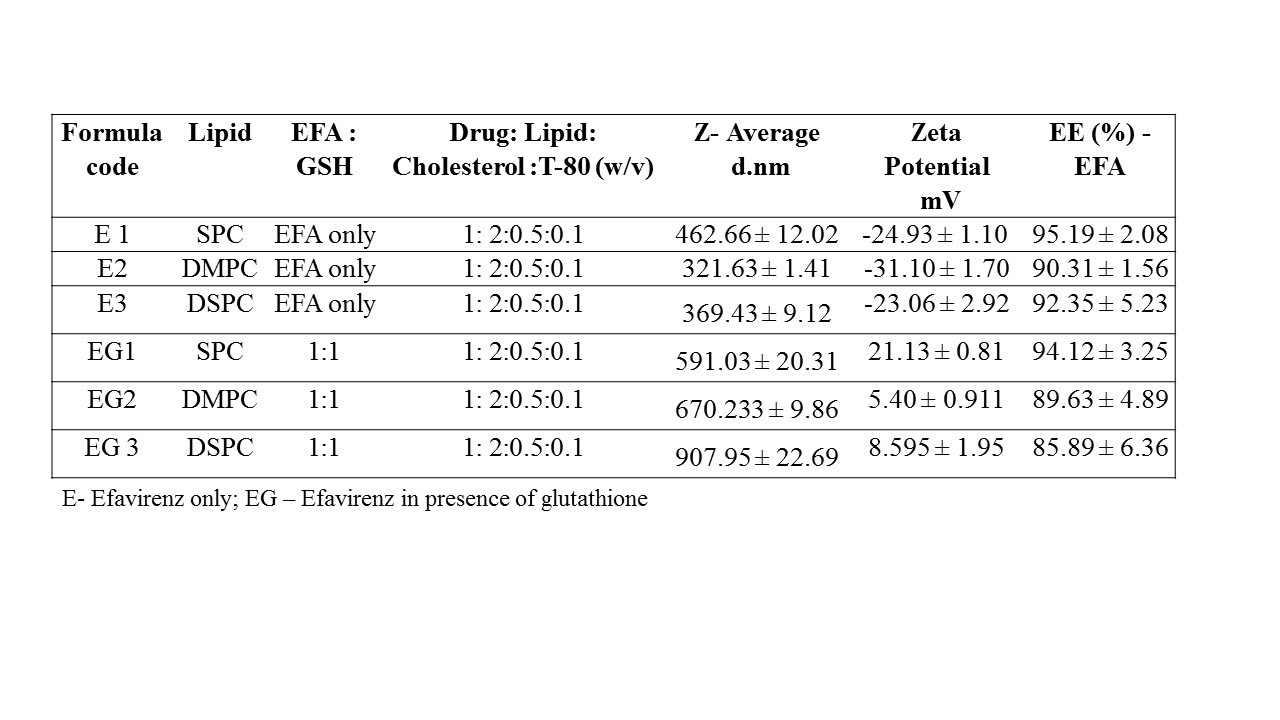