Purpose: In the last decade, mesenchymal stem cells (MSCs) have attracted significant interest due to their numerous applications, most notably in tissue regeneration, immunomodulation, and drug-delivery. One of the unique applications of MSCs is the production of non-immunogenic exosomes which can be used as drug-carriers. Exosomes are cell-secreted membrane vesicles that are more advantageous than liposomes because they can evade the host immune response leading to longer circulating half-life and improved efficacy as well as better cell targeting due to innate preferential homing targets depending on the cell source. MSCs are conventionally administered through intravenous routes; however, dissemination occurs quickly and there is a risk of embolism in the lung or entrapment in the spleen or liver. Thus, the intraoperative administration of MSCs with an appropriate tissue scaffold is ideal.

This study explores the novel incorporation MSCs with iodixanol, a radiopaque material, in a biodegradable, biocompatible polymer that could provide an alternative non-invasive imaging modality for in vivo real-time monitoring of scaffold integrity and degradation in long-term studies.


Methods: A solution of 12% poly-e-caprolactone (PCL) mixed with 5, 15, or 40 mg of iodixanol (PCL-I5, PCL-I15, PCL-I40 respectively) in hexafluoro-2-propanol (HFP) was loaded in a custom-designed electrospinning apparatus with the following parameters: flow rate of 3.0 mL/h, applied voltage of 10.5 kV, and needle-to-collector distance of 7 cm. Electrospinning is a technique that can be used to fabricate various polymers into fibrous scaffolds with submicron diameters, large surface area, and superior mechanical properties.

Fiber diameter was measured from SEM images, Young’s modulus from a standard uniaxial testing machine, and iodine content from ICP-MS.In vitro cell attachment and viability was determined by AlamarBlue assay and fluorescence imaging of MSC-GFP.

To investigate biocompatibility and cell filtration within the scaffolds, one PCL and one PCL-I15 sample were subcutaneously implanted into the back of C57BL/6 mice. All experimental procedures with animals are approved by the ACUC Committee of MD Anderson Cancer Center. The mice were anesthetized with isoflurane and two sagittal dorsal incisions were made with blunt dissection of the subcutaneous pocket. One pocket was implanted with PCL while the other with PCL-I15 constructs. The incisions were closed with absorbable sutures and all animals were monitored on a daily basis to observe for adverse reactions. The mice underwent X-ray and micro-CT imaging after 1, 7, 14, 28, or 56 days before undergoing euthanasia by CO2asphyxiation. The samples, together with their immediate surrounding tissue, were explanted, fixed, embedded in paraffin, and stained with H&E for general histological analysis.


Results: Based on the analysis of SEM images (Figure 1), the electrospun nanocomposites were homogeneous and uniform over a large area. However, differences in diameter and pore sizes were observed with differing amounts of iodine incorporated. Results show that increasing amounts of iodine decreases the fiber diameter and pore size of the polymer mat, which may be advantageous for cell attachment. The reason for which is yet to be elucidated, but it may be due to the increased conductivity and hydrophilicity of the solution with the addition of iodine. There was no significant difference among PCL and the iodixanol-loaded nanocomposites with regards to the other mechanical properties such as porosity and tensile strength.

Cell attachment and cell viability results are shown in Figure 2. There was no cytotoxic effect observed in vitrowith the addition of iodixanol as compared with PCL only. Cell attachment and viability for all nanofibers were higher than with cell culture-treated plates; however, the difference is non-significant. This is because of superior properties brought about by electrospinning such as enhanced surface area and biomimicry with the ECM.

Iodixanol provided radiopacity both in vitro, with the radiopacity increasing as iodine concentration increases, and in vivo, with the signal still visible in microCT even after 56 days post-implantation (Figure 3). Histological analysis (Figure not shown) indicate that acute inflammation is present in both PCL and PCL-I15 but declines after 7 days. At 56 days, mature fibrous connective tissue can be seen lining both PCL and PCL-I15 constructs.


Conclusion: MSCs can be used as non-immunogenic, alternative drug delivery vehicles. A novel iodixanol/PCL nanofibrous composite was synthesized using the electrospinning method. The addition of iodixanol provided the nanocomposite with advantageous properties such as smaller fiber diameter and higher surface area without providing increased cytotoxicity to cells and tissues. The nanofibers also provided higher cell proliferation and attachment with MSC-GFP compared to control. Iodixanol, a contrast agent, was able to confer uniform radiopacity to the nanofibrous construct both in vitroand in vivo. Thus, this material can be used as a biodegradable, biocompatible polymer that could provide an alternative non-invasive, real-time monitoring technique. 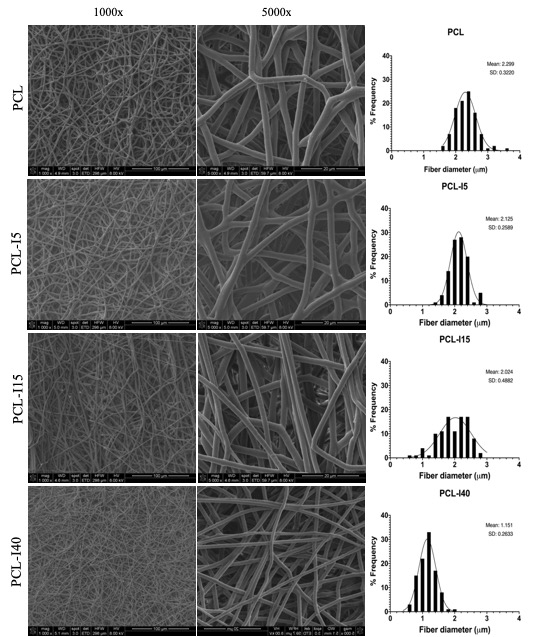 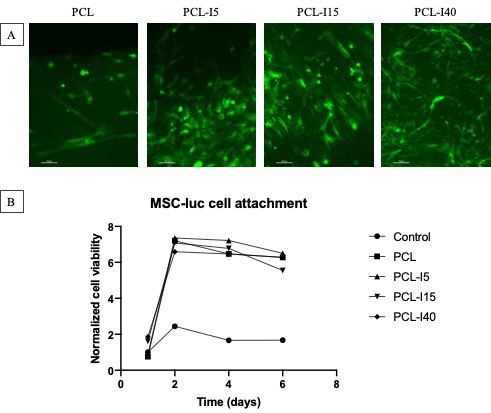