Purpose: Toxicological formulation development for pre-clinical studies is very challenging due to the limited exposure of the poorly water-soluble compounds, poor dose-proportionality of the formulation, and higher variability. A discovery compound A has low water solubility and in-vivo exposure plateaued at 100 mg/kg in rat toxicological study without showing any side effects. To overcome the exposure challenge, multiple approaches such as micronized formulation, nano formulation and spray-dried dispersion formulation were tested. Nano formulation was selected due to high exposure, good dose-proportionality, and lower variability. A new large scale rotation revolution mixer (NP-500) was evaluated and showed robustness of scaling up nano formulation manufacture from small scale instrument (NP-100).


Results: As shown in Table 1, SDD formulation of compound A with HPMCAS-MG polymer in corn oil showed the highest exposure. However, the corn-oil is not preferred in long-term tox study. The variability of the SDD formulation was also very high. Nano formulation showed second highest exposure with small variability and good dose-proportionality which was suitable for the tox studies. Table 2 showed the comparison of two scales of the nano rotation revolution mixer. NP-500 provided nano formulation with a batch size of 160 g API with using 480 g of zirconium dioxide beads within 1 hour. It is very efficient and cost effective for manufacturing nano formulation. As shown in Figure 1, the particle size of nano formulations manufactured by NP-100 and NP-500 were 89 nm and 106 nm which suggested the robustness of the NP-500 for scaling-up. 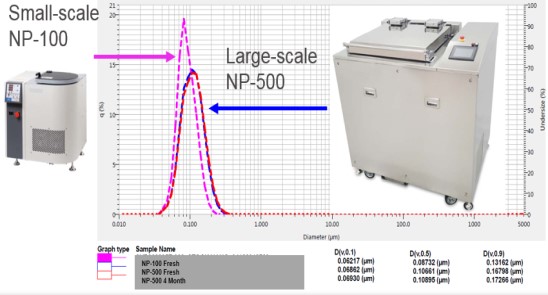