Purpose: Many antibody-based drugs and drug candidates have limited shelf life or never reach the clinic due to thermal-mechanical instabilities in formulation. Improving the formulation stability of such pharmaceuticals will reduce costs and broaden markets for those drugs, while reducing side effects caused by byproducts of instability. This work evaluates the performance of a developmental surfactant excipient in several model protein biologic formulations.


Methods: N-myristoyl phenylalanine Jeffamine M1000 amide (FM1000) was synthesized by sequential amidation of a C14-acyl chloride with phenylalanine followed by amidation of the resulting product with Jeffamine M1000. Other surfactants were pharma grade and obtained from Sigma. NMR and liquid chromatography were used to confirm the identities of the reaction products and purity following FM1000 synthesis. IgG was acquired from Sigma. Marketed pharmaceuticals were obtained from a local pharmacy. All formulations were prepared in dilute buffer or saline. SEC was performed using an Agilent AdvanceBio 300A column running in phosphate buffer. Microflow Imaging was run on a Protein Simple MFI with Bot1.


Results: Previous work focused on the fundamental characterization of FM1000, where it was found that FM1000 stabilizes interfaces 1-2 orders of magnitude faster compared to three commonly used surfactants, Polysorbate 80, Polysorbate 20 and Poloxamer 188. We hypothesize that the more rapid equilibration and stabilization of an interface should lead to improved protein stabilization with FM1000 when subjected to interfacial stress. In a polyclonal IgG model of aggregation 2-3x less FM1000 was required to affect comparable stability during agitation. In a second study, it was found that protein aggregates grew 1.8-fold slower when formulated with FM1000 compared to an equivalent concentration of PS20 (Figure 1). In a study of abatacept aggregation, FM1000 minimized the monomer loss both in glass vials and in IV bags, even out-performing Poloxamer 188, the incumbent technology (Figure 2). FM1000 also reduced the amount of higher order aggregate species formed compared to the standard surfactant technologies. The enhanced performance of the FM1000 coupled with its improved stability compared to standard technologies offers promise for its development and use for stabilizing biologic formulations in the liquid state.


Conclusion: A novel surfactant, FM1000, has been developed, derived from inert building blocks. We have studied the performance of the FM1000 and compared its behavior to conventional excipients Polysorbate 80, Polysorbate 20, and Poloxamer 188 in several protein models of aggregation. In all models, FM1000-based formulations led to significantly less aggregation stable compared to standard surfactant technologies, even at lower concentration. The data in total suggest that this novel surfactant could be a promising new material for improving the shelf-stability of antibody-derived biopharmaceuticals. 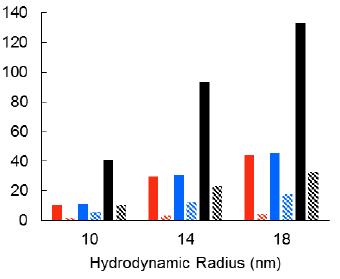 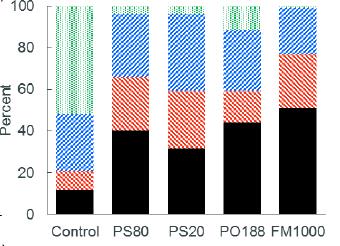