M1130-13-86 - Population Pharmacokinetics of Cefazolin Before, During, and After Cardiopulmonary Bypass in Japanese Patients Undergoing Cardiothoracic Surgery

Purpose: While cardiothoracic surgery is often performed with cardiopulmonary bypass (CPB), there is a paucity of knowledge about changes that may occur in the pharmacokinetics of drugs during CPB. Cefazolin is widely used as a prophylactic antibiotic for surgery. Cefazolin is highly bound to human serum albumin and its binding is saturable at higher plasma concentrations. Recently, De Cock et al. reported the population pharmacokinetics of cefazolin in children undergoing cardiac surgery with CPB (1). We have investigated the total and unbound plasma concentrations of cefazolin in Japanese adult patients undergoing cardiothoracic surgery and found a significant increase in plasma unbound fraction of cefazolin during CPB, which was accompanied by a significant reduction in plasma albumin concentration (2). The purpose of the present study was to establish a pharmacokinetic model of cefazolin by means of population pharmacokinetic analysis for Japanese adult patients undergoing cardiothoracic surgery with CPB, in order to derive an evidence-based dosing regimen.


Methods: Adult patients who underwent cardiothoracic surgery with CPB at the Medical Hospital, Tokyo Medical and Dental University between May 2015 and July 2017 were enrolled in the study. The study was approved by the Ethics Committee of the Faculty of Medicine, Medical Research Tokyo Medical and Dental University, Tokyo, Japan before the study was begun (authorization number: M2000-1895). Cefazolin (Nichiiko, Toyama, Japan) was administered intravenously at a dose of 1 g approximately 60 min before the surgical incision and additional doses were administered every 4 h during surgery. In addition, a 2 g of cefazolin was added to the priming solution of the CPB circuit. Blood samples were collected before, during and after CPB and the unbound fraction of cefazolin was separated by the ultrafiltration of plasma. Total and unbound concentrations of cefazolin in plasma were analysed using a high performance liquid chromatography with UV detection. Models for the cefazolin concentration-time profiles were developed with a nonlinear mixed-effect modeling approach using NONMEM version 7.2 (ICON, Ellicott City, MD, USA). The total cefazolin concentrations and unbound concentrations were modelled simultaneously and related to each other, taking into account saturable serum protein binding (the maximum protein binding (Bmax) and the dissociation constant (KD)).


Results: A total of 199 blood samples were obtained from 27 patients. Patients demographics and perioperative characteristics are summarized in Table 1. The median plasma unbound fraction of cefazolin increased significantly from 21% before skin incision to 45% during CPB (p< 0.001), which was accompanied by a significant reduction in median plasma albumin concentration from 36 to 27 g L-1 (p< 0.001). A one-compartment model with first-order elimination plus an additional compartment for the effect of CPB best described the data. The effect of CPB was modeled using a separate on/off compartment. Inter-compartmental clearance (QCPB) was fixed to the CPB pump flow rate and volume of distribution (VCPB) to the CPB priming volume (Figure 1). Plasma unbound concentrations of cefazolin were related to the total concentrations of cefazolin by means of Langmuir model. Population mean values of clearance (CL) and volume of distribution (VC) were estimated using the total concentrations of cefazolin. CPB was identified as a covariate of CL and VC. CL increased from 2.04 L h-1 before and after CPB to 2.62 L h-1 during CPB. VC increased from 9.9 L before CPB to 12.6 L during and after CPB. The plasma albumin concentration was associated with Bmax (Table 2).


Conclusion: We conclude that the time courses of total and unbound cefazolin concentrations in adult patients undergoing cardiac surgery could be described by a one-compartment model that includes saturable protein binding and the effect of CPB could be modelled using a separate on/off compartment. The estimated population parameters would be useful for the development of rational cefazolin dose regimen in Japanese adult patients undergoing cardiothoracic surgery with CPB. 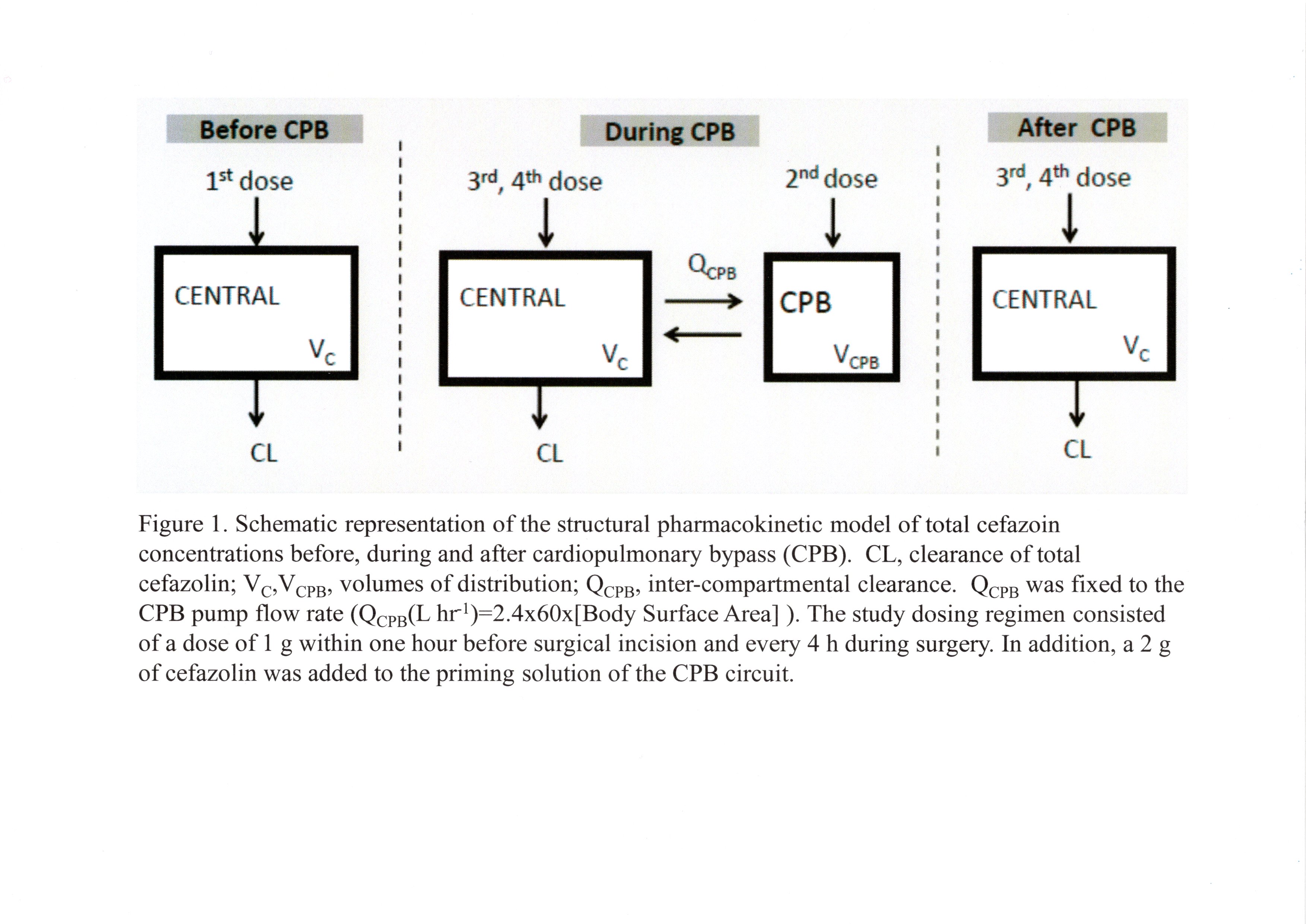 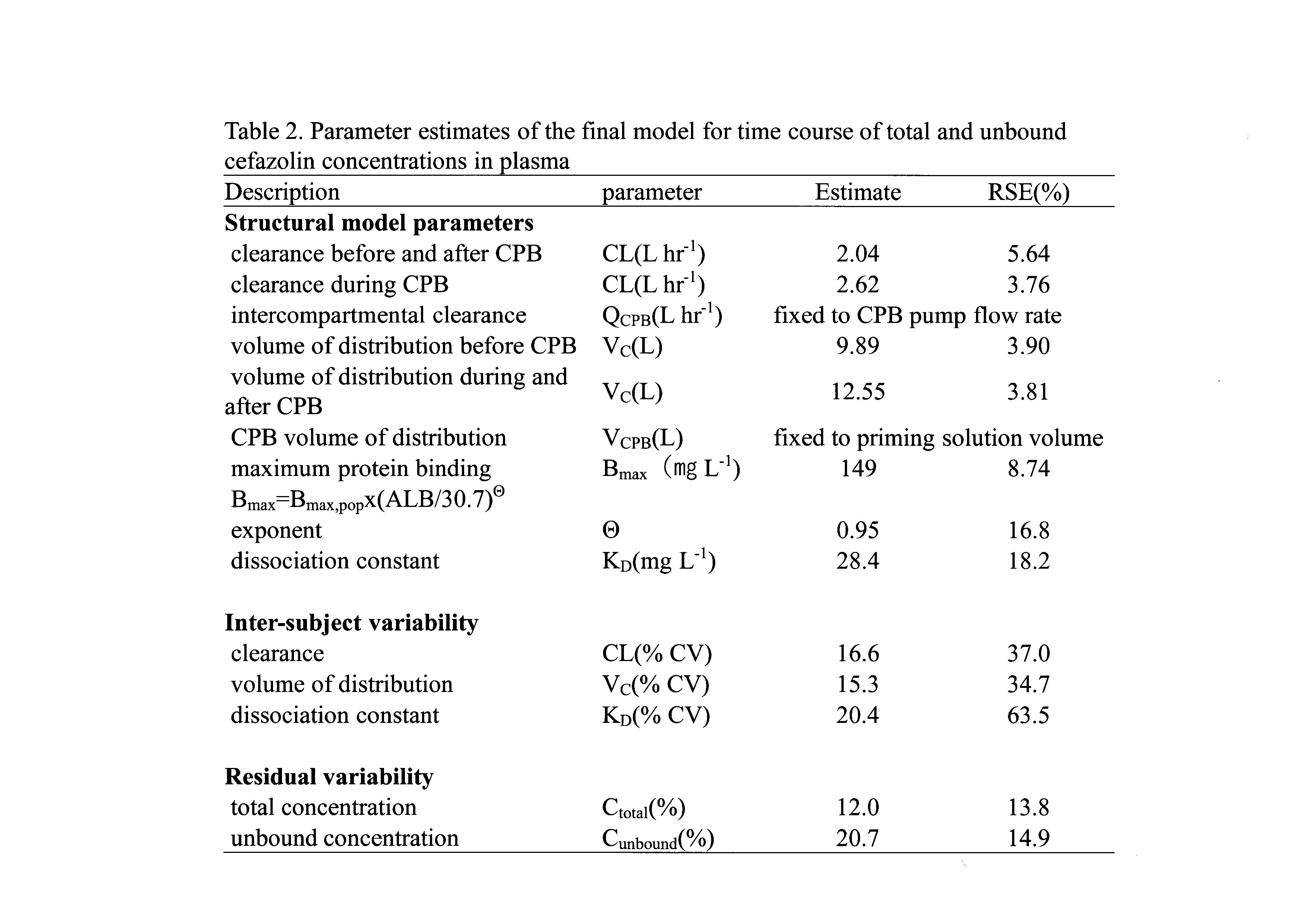