Purpose: The purpose of this study is to confirm the change of physicochemical and dissolution rate of the nifedipine prepared in solid dispersion for sustained release. The effect of various excipients on the dissolution rate was also studied and the possibility of oral pharmaceutical formulation was examined.


Methods: Nifedipine hydrochloride and PVP-K30, were dissolved in methanol in the ratio indicated in table 1. The solvent was subsequently evaporated by the use of a rotary evaporator with a speed of 50 rpm at a constant temperature of 65 ℃. The product was then uniformly crushed to obtain the solid dispersion (SD) and then stored in a desiccator until its use. SD and additives were used to fabricate the tablet indicated in table 1. The powder compression method was used for tableting. Ingredients in table 1 were prepared and placed in a diameter of 8 mm mold, and then 10 kg/cm2 was applied for 20 seconds by using press and then stored in desiccator until its use. Scanning tunneling microscopy was used to observe the morphology of the SD, the nifedipine hydrochloride drug, and the PVP-K30 polymer. PXRD, DSC and FT-IR were used to study the structural properties of the nifedipine hydrochloride drug and PVP-K30 and solid dispersion. To measure the drug content of the solid dispersion, 1 ml of a solution obtained by dissolving 120 mg of solid dispersion (nifedipine: polymer = 1: 3) in 30 ml methanol and 1 ml of a solution made by dissolving 30 mg of nifedipine in 20 mL methanol were filtered with a 0.45 μm PTFE filter and analyzed by HPLC. The dissolution test of the prepared tablets was carried out by the rotation specimen method.


Results: The SEM images show micrographics of the solid dispersion and its components (nifedipine and PVP-K30): nifedipine was formed by particles with an angular shape of about 20~50 μm, instead, PVP-K30 particles were about 40~60 μm in diameter with an amorphous surface and a smooth spherical shape. In the solid dispersion the particles diameter was about 3 ~ 6 μm and the surface morphology was different from what was observed in both API and PVP. PXRD, DSC and FT-IR were performed to characterize nifedipine, PVP-K30 and the solid dispersion. The XRD analysis show that a crystalline peak is present in the nifedipine, confirming its crystalline state. PVP-K30 resulted to be in an amorphous state: in its XRD spectra only a broad peak of low intensity was present and it could be related to the amorphous background. Compared to the peak of SD, all batches include PVP-K30 and the peak showed low temperature at each major peak due to the influence of other additives. FT-IR spectrum are shown in the case of nifedipine, N-H stretching, C=O stretching and C-O bending was observed at 3350 ~ 3250 cm-1, 1677.3 and 1189 cm-1. In the solid dispersion, functional peaks of nifedipine were became broaden after rotary evaporator process (SD peak). In vitro dissolution behavior was observed in the artificial intestinal fluid (pH 6.8). The API of nifedipine shows a dissolution rate of about 22%. All batches showed a higher dissolution rate than nifedipine and showed a dissolution rate in the range of 81-86% within 720 minutes. In the case of Bat 2 prepared with Gellan-gum, the dissolution rate reached almost 70% within 120 minutes after the elution start. Bat 4 and 5 also exhibited an early release pattern, which appears to be due to the rapid swelling and degradation characteristics of Gellan-gum. On the other hand, in Bats 1 and 3 where nifedipine was physically bound to the solid dispersion using HPMC, PEO showed a release behavior of only 40% in about 120 minutes. Bats 1 and 3 with HPMC K100 MCR and PEO 8000K exhibited a relatively constant release behavior over 720 minutes with a final dissolution rate of 86% and 85% due to the strong expansion of the added HPMC K100 MCR. Nifedipine was released through the swollen HPMC K100 MCR, which sustained the release rate, and it allowed Bat 1 and 3 to benefit more from of sustained release.


Conclusion: A solid dispersion was prepared by mixing a water-soluble polymer PVP-K30 and an insoluble drug, nifedipine, in a 3:1 ratio by a rotary evaporation. The sample morphology was analyzed by SEM: in the SD the drug was no more visible confirming its bonding in the polymeric matrix. In order to investigate the crystallographic properties, DSC and XRD were used: the nifedipine drug inside the SD lost its original crystallinity and changed into an amorphous state. In the FT-IR spectra, the change in molecular structure due to the evaporation was analyzed. As a result of dissolution test in artificial intestines, nifedipine solid dispersion using PVP-K30 as a water-soluble polymer showed high hydrophilicity and excellent dissolution rate. 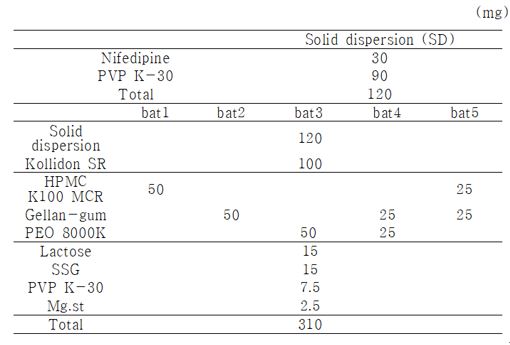 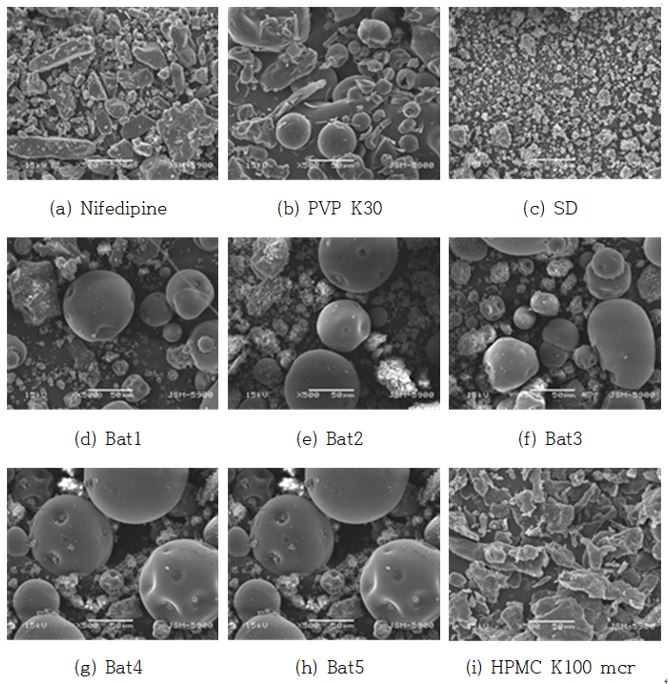 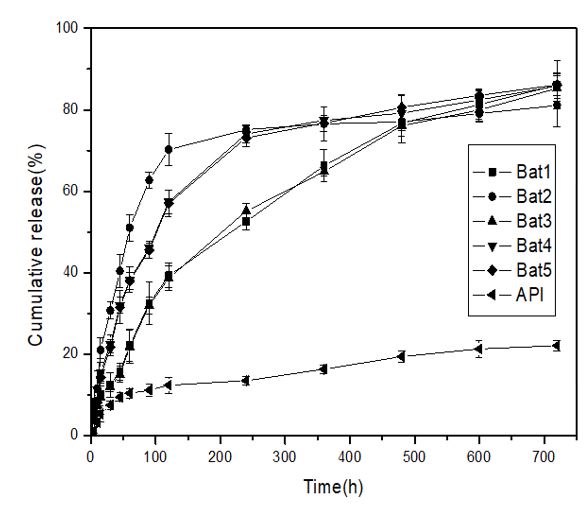