Purpose: Tablets are the most widely used drug formulations among various types of oral dosage forms. They are easy to handle and are convenient to carry and store. In the treatment of diseases such as hyperphosphatemia and chronic renal failure, the dose of active pharmaceutical ingredients (APIs) is large (up to several grams). In such cases, the size of tablets or number of tablets in an unit may have to be increased, thereby making it difficult to swallow such large tablets or to take so many tablets, respectively. Although powder or granular formulations may be selected as alternatives to tablets, it will be difficult to take these formulations in larger than normal amounts. In recent years, mini-tablets have been developed. These are suggested to be easier to swallow than conventional tablets. We have reported that it is easy to take mini-tablets if the unit dose size accounts for < 5 tablets.1) However, for larger doses of APIs, the number of mini-tablets to be taken has to be increased. In this study, we aimed to clarify the ease of taking mini-tablets containing a large dose of APIs and compared their palatability with that of powder and granular formulations containing the same amounts of APIs. We prepared placebo (containing no APIs) formulations (powder, PW; granule, GR; mini-tablets, MT) assumed to contain large dose of APIs for this human study. Furthermore, many APIs have a bitter taste, which worsen the palatability of formulations. Thus, we prepared similar formulations containing bitter polyphenols and evaluated the ease of taking and the palatability of the formulations.


Methods: We prepared placebo PW, GR, and MT with similar excipients. GR was prepared by the wet granulation method with a particle size of 212–415 μm. MT were prepared by compaction and had a diameter of 2.3 mm. In addition, PW, GR, and MT with bitter-tasting polyphenols from Yuzu fruit (B-PW, B-GR, B-MT, respectively) were prepared by adding the polyphenols to the formulations. Each formulation (2.5 g) was packaged into transparent stick-type packages. Seventeen healthy volunteers (age, 23.4±1.5 years) participated in this trial. The study protocol was approved by the Ethics Committee of the University of Shizuoka. The study was conducted according to the randomized crossover design for each of the formulations without polyphenols (PW, GR, MT) and with polyphenols (B-PW, B-GR, B-MT). Each volunteer took the formulations from the packages with a minimum volume of water required to consume the formulation without difficulty, and the volume of water was measured. Immediately after taking, the volunteers evaluated the formulations for ease of swallowing, bitterness, and overall ease of taking each formulation using a visual analogue scale (VAS) with a VAS score of 100 indicating “very difficult to swallow,” “very bitter”, and “very difficult to take,” respectively. After rinsing the mouth, they evaluated the formulations based on a 5-point scale for ease of putting the formulation into mouth (1, very difficult to put in; 5, very easy to put in) and for overall preference for the formulation (1, least preferred; 5, most preferred.).


Conclusion: The ease of taking and palatability of mini-tablets containing a large dose of APIs are suggested to be superior to those of powder and granular formulations, especially if the formulations contain APIs with a bitter taste. Thus, mini-tablets could be an alternative dosage form for large-dose drugs. 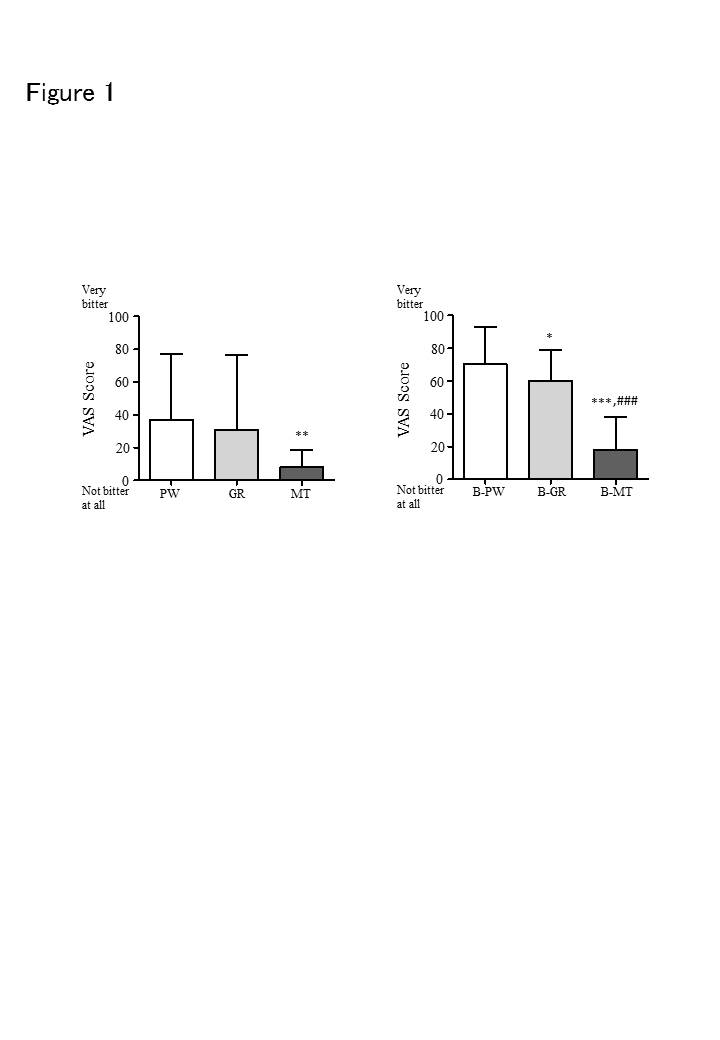 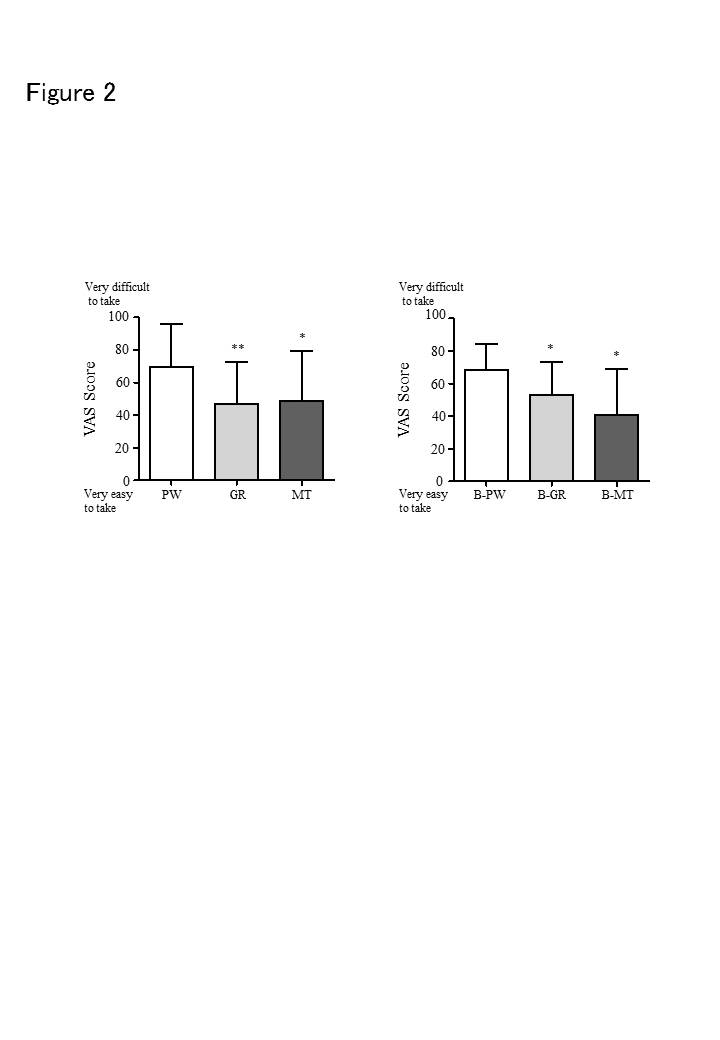