Purpose: Supersaturating drug delivery systems (SDDS), such as amorphous form, are capable to promote rapid drug dissolution, usually leading to concentrations above drug solubility in the gastrointestinal tract (supersaturation) and consequently promoting better absorption. Griseofulvin (GSF) is an antifungal drug that has low aqueous solubility and consequent low oral bioavailability. Several studies investigated formulations strategies to enhance its aqueous solubility and dissolution. It was demonstrated that GSF present rapid recrystallization in solution even in the presence of polymers and at the solid-state, although it has a high glass transition temperature value [23–27].In this context, the aim of this work was to evaluate the ability of amino acids, as hydrophilic carriers, to improve drug dissolution rate and to stabilize GSF supersaturated solutions, as well as to stabilize amorphous systems in the solid-state, avoiding recrystallization.


Methods: The impactof amino acids aspartic acid, lysine, methionine, tryptophan and valine on GSF precipitation under supersaturation condition was performed by Solvent Shift Method. The SDDS development wereexplored by the ball millingtechnique (GSF + amino acid 1:1 M ratio) and Quench Cooling (sample melting followed by a quickly cooling to obtain amorphous GSF (GSF QC)). The samples were characterized by X-ray powder diffraction (XRPD), differential scanning calorimetry (DSC),infrared spectroscopy (IR)and polarized light microscopy (PLM).The obtained systems were submitted to in vitrodissolution tests, under non-sink condition in a Shaker NT 715 (NovaTécnica, Brazil), at 37.0 °C, 240 rpm. Amounts of samples (to achieve a final GSF concentration of 0.283 mM and 0.850 mM)) were weighed and added to the media. In order to investigate the occurrence of drug recrystallization during storage, the samples were storaged in a desiccator with a silica gel (13-32% RH, 23-28 °C). At pretermitted times (day of amorphous sample preparation (0D), seven days (7D), and six months (6M) later), the samples were analyzed by XRPD.


Results: The amino acids aspartic acid, methionine, valine and tryptophan demonstrated similar behavior in phosphate buffer pH 6.5 (Figure 1) on drug precipitation. However, in the FaSSIF biorelevant medium only tryptophan was able to reduce GSF precipitation, providing a significant increase in the area under the curve (AUC). The solid-state characterization of the ground samples showed that an amorphous system was obtained only bythe combination of GSF + tryptophan(GSF TRYP BM). In vitrodissolution studies (Figure 2) demonstrated that the GSF-TRYP BM provided an increase in AUC of 88.6 % and 58.2 % when compared to GSF QC, in the FaSSGF and FaSSIF media, respectively (at the higher dose tested, equivalent to 0.850 mM). Thus, the ability of this amino acid to inhibit GSF precipitation appears to be dependent on its concentration in solution. During the stability studiesperformed, TRYP was able to inhibit recrystallization of GSF in the solid state for a period of 6 months, whereas GSF QC already showed recrystallization after 1 week (Figure 3).


Conclusion: Among all of the amino acids studied (aspartic acid, lysine, methionine, tryptophan and valine), tryptophan has exhibitedbest results regarding the precipitation inhibition of GSF under supersaturated solution. Nevertheless, tryptophan showed a modest improvement on AUC values in the presence of biorelevant medium, since this medium appears to rush drug precipitation in solution.

The tryptophan presence also impacts positively on the amorphization process of the drug in comparison to neat drug, which remains crystalline after being submitted to same conditions where GSF TRYP BM turned in to amorphous form. In vitrodrug dissolution demonstrated that TRYP also contribute to improve drug dissolution rate compared to the amorphous GSF, and this contribution seems to be dependent of its concentration in solution. However, more studies need to be carried out varying GSF-TRYPratios, in order to optimize drug dissolution advantage in amorphous formulations.

At solid-state, although the amorphous form of GSF was unstable and tended to recrystallize very quickly, the amino acid TRYP was able to stabilize GSF in the amorphous for a period of six months along. The insights gained from this study maycontribute for the development of GSF amorphous formulations, containing amino acids, in order to improve drug dissolution rate and to obtain stable amorphous systems during storage conditions. 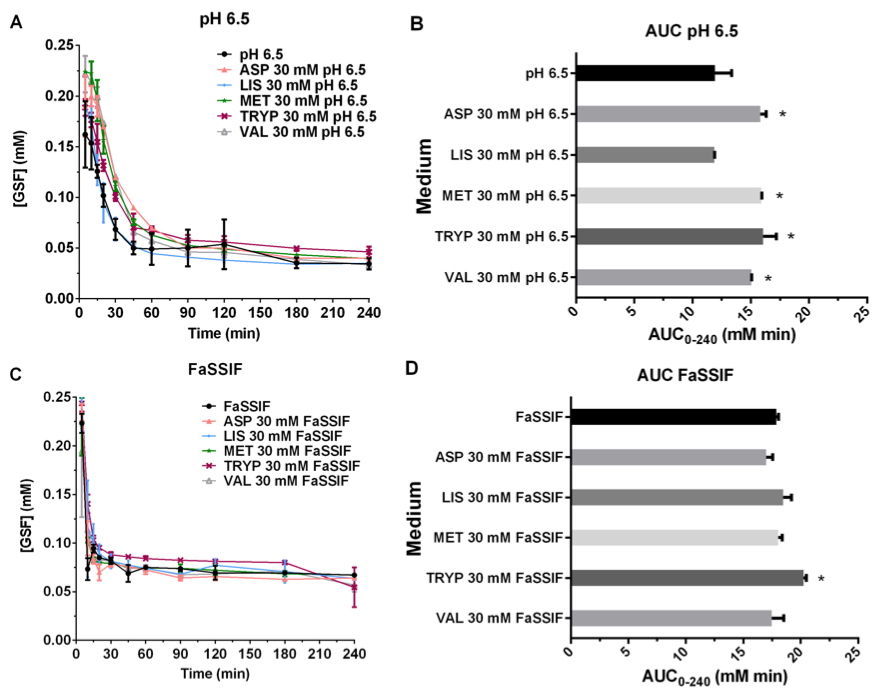 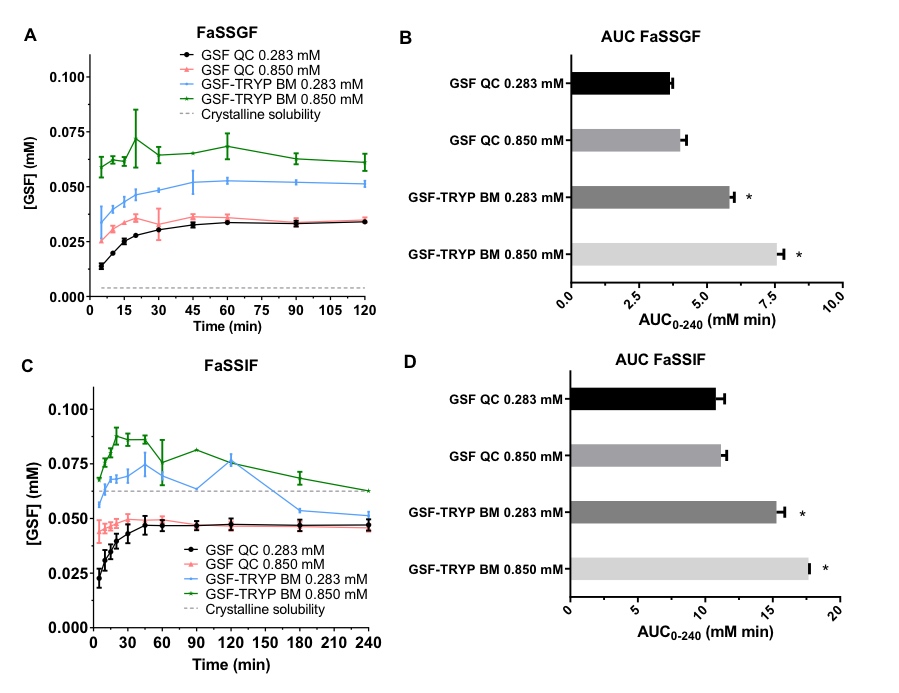 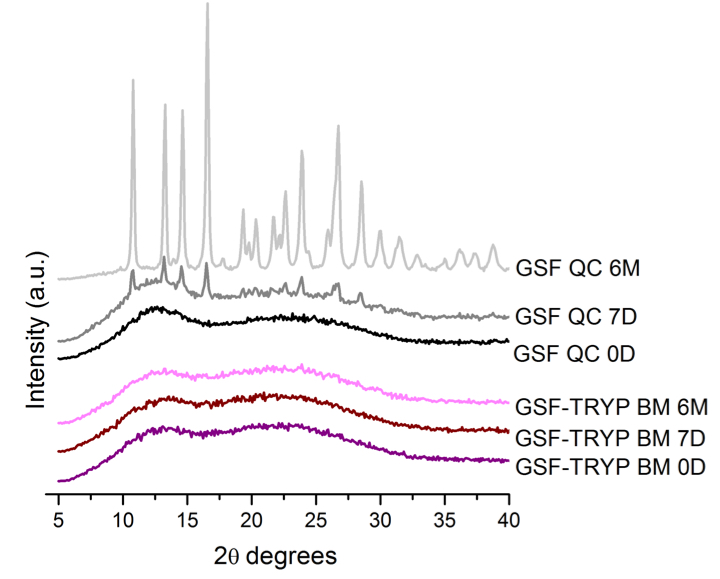