Purpose: The processed lateral root of Radix Aconiti Lateralis (Fuzi) is an extensively used traditional Chinese medicine with promising therapeutic effects in cardiovascular diseases, rheumatism arthritis and hypothyroidism. However, the toxicities of Fuzi are frequently observed, and overdosing is believed to be the most important reason for its toxicities according to reported poisoning cases. The current recommended dose range of Fuzi by 2015 Chinese Pharmacopoeia (3-15 g per person per day) is empirical with no sufficient bench evidences. Comprehensive toxicity assessments are essential for No-Observed-Adverse-Effect-Level determination of western drugs. However, such information is lacking for traditional Chinese medicines like Fuzi. Therefore, the current study was proposed aiming to monitor the toxicities of two most commonly used Fuzi preparations at cell, tissue and organ levels in rats.


Methods: Commercially available concentrated granule of Heishunpian (Batch No. A1601163) and Paofupian (Batch No. A1701434) were two most commonly used Fuzi products for the treatment of acute and chronic diseases, respectively. They were selected to be tested at the dose of 30 g/kg in rats, which was equivalent to the maximum reported clinical dose of Fuzi. Single dose of Heishunpian and multiple dose of Paofupian for 15 days were orally administered to rats (n=8). In order to mimic clinical use of Fuzi preparations, 5 g concentrated granule of Heishunpian and Paofupian were suspended in 10 mL boiling water with the aid of sonication. For rats in control group, equivalent volume of water was given by oral gavage. Electrocardiogram (ECG) were monitored for heart rate and characteristic waves changes at 1.5 hr after either Heishunpian single dosing or Paofupian dosing at day 3, 6, 9, 12 and 15 followed by blood samplings at 2 hr postdosing. At the end of each Fuzi preparation treatment, rats were sacrificed followed by collecting blood and major organs including liver, kidney, heart and brain for various toxicity assessments. In brief, serum was obtained from blood sample for organ injury related biomarkers detection including ALT, Urea, Creatinine, CK, AST, and LDH using commercial Abcam© assay kits. H&E staining was used to detect pathological changes in tissues from collected organs. Expressions of cleaved caspase-3 and caspase-9, cell apoptosis related effectors, in above mentioned organs were obtained with western-blot. To correlate the relationship between toxicity response and tissue distribution levels of toxic alkaloids after above Fuzi preparation treatment, biodistributions of toxic aconitum alkaloids including aconitine, hypaconitine, mesaconitine, benzoylaconine, benzoylhypaconine and benzoylmesaconine in plasma and organs were also carried out with all collected samples being analyzed by our previously developed and validated LC/MS/MS assay method. Data from different treatment groups were compared with that from the related control group using two-sided t-test to evaluate the potential changes caused by the studied Fuzi preparations.


Results: Pathological changes and cell apoptosis have been observed in all Fuzi dosing group rats regardless of its preparations. As indicated in Figure 1, dilated central vein and edema in the surrounding cells appeared in liver tissue after taking both Fuzi preparations. Single dose of Heishunpian could cause ruptured myocardial cells in heart tissue while multiple dosing of Paofupian could induce glomerular edema in kidney cortex. Figure 2 depicted that relative expression level of cleaved capspase-9 in rat liver increased after Paofupian multiple dose treatment, suggesting the activation of cell apoptosis pathway. Biodistributions of six toxic aconitum alkaloids in major organs (Figure 3) followed the order of liver, kidney, heart and brain, which was consistent with that of toxicity responses. Nevertheless, there was no significant changes shown from serum biomarkers and ECG test after dosing of two Fuzi preparations. Our observation from pathological changes and cell apoptosis markers in rats suggested early damage in liver, kidney, and cardiac tissues after ingestion of both Fuzi preparations at 30 g/kg in rats.


Conclusion: The two tested Fuzi preparations could induce acute or sub-chronic toxicities in rats at 30 g/kg, in which liver injury was more obvious than kidney, heart and brain damage. The highest concentrations of toxic aconitum alkaloids in liver could be one of reasons for Fuzi induced liver injury. 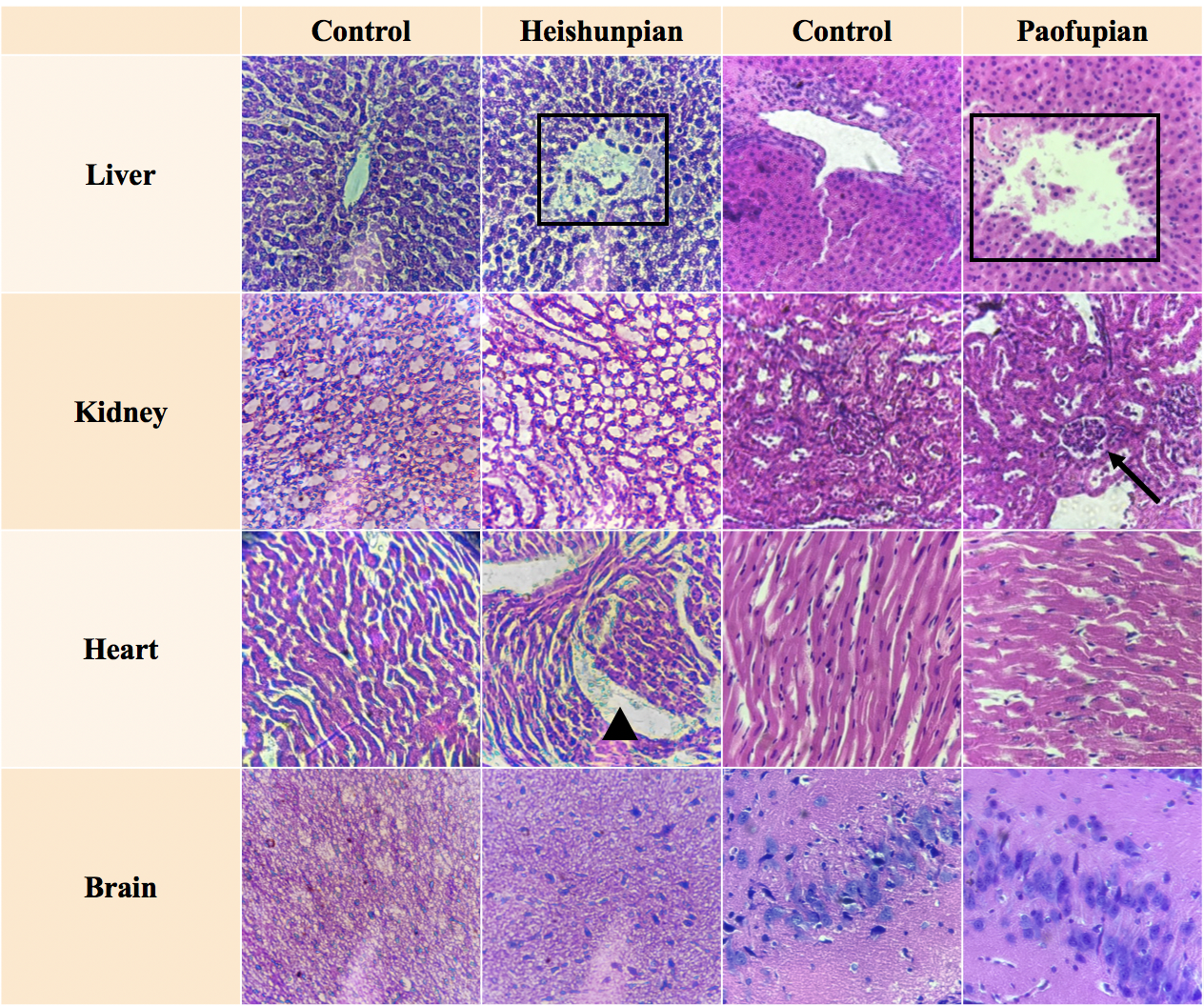