Purpose: A small molecule active pharmaceutical ingredient (API) which contains an organic counter ion and the neutral form of the drug is under development by our company. The API can readily undergo free radical formations to form a dimer, which is the only major impurity. Both the monomer, dimer and the counter ion have no distinguished chromophore and the currently reported HPLC methods involve long, tedious gradient elution to separate the analytes. The purpose of this research is to develop a novel HPLC method for rapid, accurate quantitation of the drug, counter ion and dimer, to provide a fast screening method to investigate the drug dimerization rate and to find a suitable stabilizer in early drug development and late drug release tests.


Methods: A fast HPLC method was developed by using HPLC column packed with core-shell, small size particles. The method provides a baseline separation to all analytes of interest while avoiding co-elution of formulation excipients in 1 minute run time. By using acetonitrile as the only organic modifier, the method affords to use UV wavelength at 200 nm and offers a sensitive detection for all peaks of interest. UV detection was desirable over other detection methods (e.g. RI, ELS, or CAD) to afford the method to be sufficiently sensitive, accurate and linear, thus allowing a single method to be used for assay, uniformity, impurity, and dissolution analysis.

A typical chromatogram of the separation is shown in Figure 1 with the following conditions:

Results: For a dimerization reaction the reaction rate can be written as:

Where: [X] = concentration of the monomer;

Or the inverse concentration of monomer, 1/[X], is proportional to the reaction time.

In the pre-formulation study, the reaction kinetics of the degradation of API from monomer to dimer was investigated by using the developed HPLC method.

The reaction rates at different conditions, either treated with dimer-inhibitors or untreated, can be quickly measured. The goal was to provide a fast screening method to find drug stabilizers in early development stages.

Figure 2 show the results of inverse of drug concentration vs. reaction time. As it can be seen the reaction rate of samples with a dimerization inhibitor was 0.044/mM*Hour which is about half that of without inhibitor.

Therefore the method was found adequate for early pre-formulation studies. As the concentration of the API and its impurities can be measured accurately and precisely, the method was also used as a testing method for assay, dissolution and impurities during later-stage drug development cycles.

Conclusion: We developed an ultra-fast HPLC method for simultaneous quantitation of API and its major impurities. While none of the analytes have a chromophore, the method provides a sensitive detection with linear responses over a large range of concentration. The method was used for quick investigations of impurity formation and methods of prevention in early excipient compatibility and other pre-formulation applications. 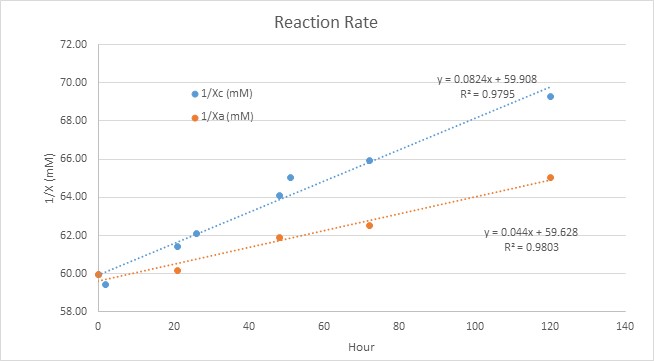