Purpose: Presence of amorphous material in micronized drug substances can impact its quality attributes as well as the performance of the intended dosage form. In particular to inhaled formulations, presence of amorphous phase can induce particle fusion leading to agglomeration which can potentially impact drug delivery. For this specific drug substance, multiple techniques were considered, and DVS was determined to be the most appropriate and suitable. However, conventional DVS analysis (Figure 1) are typically time consuming. The purpose of the study was to develop an alternative abbreviated DVS method which will afford acceptable linearity, precision and robustness.


Methods: Binary mixtures containing amorphous and crystalline drug substance were prepared as standards for method development and validation. Amorphous contents of 1%, 2.5%, 5%, 7.5%, and 10% (w/w) were prepared via geometric mixing technique. Relative humidity of less than or equal to 10% was maintained during all manipulations of the drug substance materials.

All samples were analyzed using DVS Advantage-1 (Surface Measurement Systems) by a four-step abbreviated DVS method (Figure 2). Triplicate analyses of each standard (10 mg ± 2 mg) were performed for determining the linearity of response and generating a calibration curve. Response was determined by subtracting the maximum percent mass gain during Step 4 (V2) from the maximum percent mass gain from Step 2 (V1). Linearity was assessed by conducting linear regression analysis of the response values (V1-V2) obtained relative to the actual amorphous concentrations.


Results: As shown in Figure 3, the linearity curve generated from binary amorphous standards achieved R2 =0.9953, exceeding the acceptance criterion for linearity specified for the method.


Conclusion: The analytical method employed during this method development and validation study met all acceptance criteria for linearity, precision, and robustness. This analytical method is considered suitable for the routine analysis of amorphous content in the drug substance samples. 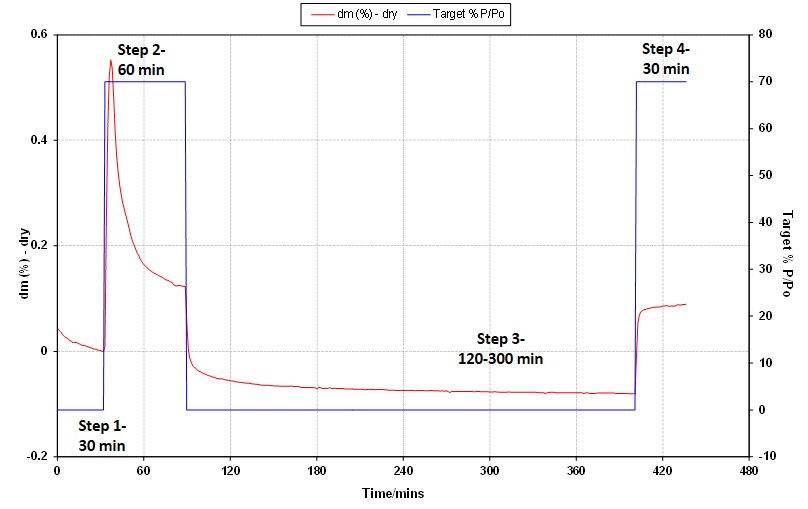 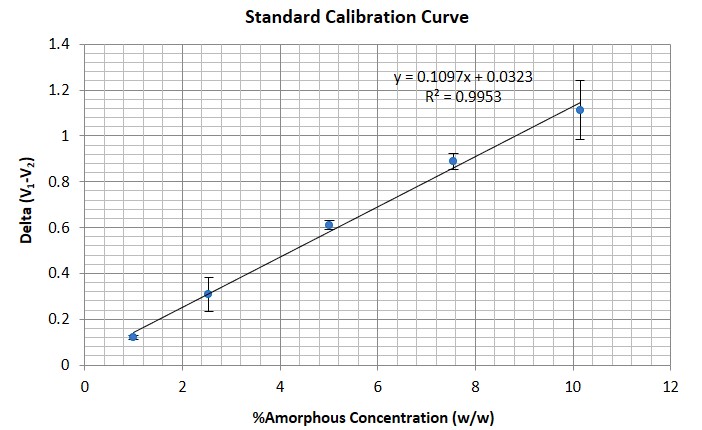