Purpose: In this work, we demonstrate a process that accelerates the serum-free/suspension adaptation for mammalian cells using medium optimization by DOE (design of experiment), instead of repetitive subculturing.


Methods: Chinese Hamster Ovarian (CHO) DP-12 cell line (Clone #1934, CRL-12445 from ATCC) was used as model cell. This anchorage-dependent cell was cultured in TC-treated flask at 5% CO2 and 37 ◦C. The complete medium (CM) was Dulbecco’s Modified Essential Medium (DMEM) supplemented with Fetal Bovine Serum (10%), Insulin (2 µg/mL), Cellgro Trace Element A and B (1x), and Methotrexate (200nM). The basal serum free medium (SFM) was CD CHO chemical defined medium. It was supplemented with GlutaMAXTM (8 mM) and anti-clumping agent (0.4%, v/v), along with Methotrexate (200nM). The adaptation study was performed by the gradual serum reduction approach. This approach cultures cells in mixtures of CM and SFM at decreasing CM ratios (75:25, 50:50, 25:75, 10:90 and 0:100). After cells were adapted at a given level, they were cultured at the next level.

The Ca2+ and Mg2+ concentrations were adjusted and optimized based on the cell doubling time at the adherence stage (CM:SFM = 75:25 and 50:50). The doubling time (td) at each Ca2+/Mg2+ level was compared using t-test, with p< 0.05 as significance level. Cell density and viability were obtained by Countess Cell Counter using trypan blue exclusion method.

A definitive screening design (DSD) was conducted for the adaptation from 10% CM to serum free (0%). The design had 15 runs in total with 3 replicate center points. Six factors and three levels were included (DMEM, insulin, calcium, magnesium, Trace Element A and B). Main effects and interaction terms were included in the linear regression models of viable cell density (VCD) and viability. T-test was used to evaluate significance of each term; and ANOVA was used to evaluate the significance of model explained variance.

The CHO cells were cultured in suspension at the 25% and 10% CM. Cells failed to grow when the CM percentage was reduced below 10%. A definitive screening design was conducted to select the non-serum essential nutrients for suspension adaptation. 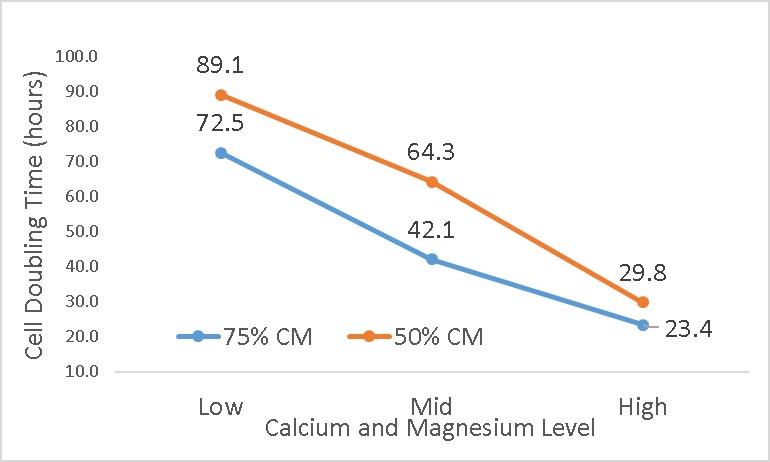 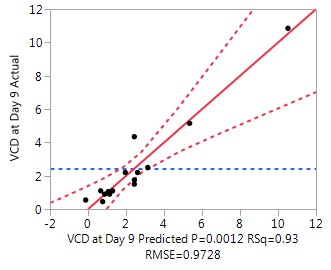