Purpose: During the early stage formulation development, significant degradation of compound A (in the HPMCAS based SDD material under 40oC/75%RH storage condition) was observed. It was an unusual observation because the API is stable under solution and solid stability studies and HPMCAS is regarded as a relatively inert polymer. The degradant was identified as succinate ester of the API by LC-MS and 1HNMR after isolating the pure degradant fraction from the SDD degradation mixture using supercritical fluid chromatography (SFC). The degradant was formed when the hydroxyl group of the API interacted with the succinate group on HPMCAS polymer. The impact of this degradation upon long term storage needs to be assessed.


Methods: The degradation kinetics was studied at 40oC, 60oC and 75oC. The compound A SDD solid materials were stored at three temperatures and samples were analyzed by HPLC at timepoints shown in Table 1.


Results: The degradation of compound A in HPMCAS SDD formulation followed zero order reaction kinetics based on the plots shown in Fig. 1 (40oC), Fig. 2 (60oC) and Fig. 3 (75oC). The linear Arrhenius plot of the reaction rates and temperature has the correlation coefficient at 0.9998. Table 2 below showed the time needed to generate 0.15% degradant at 4oC and 25oC.

Table 2. Prediction of Degradation at 4oC and 25oC for Compound A HPMCAS SDD 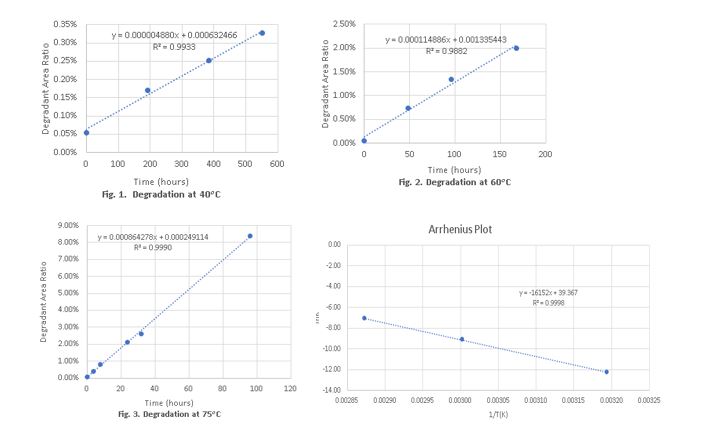