Purpose: Pulmonary arterial hypertension (PAH) is a fatal disease, which is characterized by elevated mean pulmonary arterial pressure (mPAP), arterial remodeling and death from right heart failure. Because of overlapping and ambiguous symptoms of the disease, PAH patients remain undiagnosed for several years before they receive any treatments. Thus, an early and accurate diagnosis, an understanding of disease progression, and monitoring of therapeutic outcomes are likely to reduce the mortality of PAH patients. In PAH patients, high arterial pressures and the resulting shear stress present in pulmonary vasculature increase the number of circulating endothelial cells (CECs) that shed from remodeled pulmonary arteries/arterioles. In fact, the number of CECs in the blood of PAH patients appear to have a link with the disease severity and progression and thus CECs have been proposed as a potential biomarker for PAH diagnosis and progression. However, current tools for the isolation of CECs are complex, time-consuming and often non-specific. In the absence of a tool for using CECs as biomarkers, here we have described the design, validation, and clinical utilization of a biodegradable nano-film coated microfluidic chip that enables isolation and detection of CECs directly from human whole blood and subsequent characterization of isolated cells.


Methods: We fabricated a HBCEC-chip comprising a 1×3-inch glass slide and a poly(dimethylsiloxane) layer containing two channels: a bottom channel and an upper channel engraved with 310 herringbone (HB) patterns of 40 × 50 μm2 size. We first coated the bottom channel with cationic (Poly diallyldimethylammonium chloride) and anionic polymers (biotinylated alginate) in a layer-by-layer fashion and then added fluorescent conjugated streptavidin into coated channels. Finally we treated the chips with biotin-labeled anti-human CD146, CD31, or doppel antibodies (Fig.1A-D). We then used these chips for isolating CECs in blood collected from rats, PAH patients and healthy volunteers. After incubating with CellTracker™, Green CMFDA Dye, we flushed the chips with spiked cells or whole blood and determined CECs if they were CMFDA+/DAPI+/CD31+/CD146+/CD45-. To assess the purity of the cells entrapped by the chips, we stained the chips with CD45 antibody to distinguish the WBCs from CECs. To characterize CECs, we detached the captured cells by alginate lyase and cultured them for 3 days. The viability of the retrieved cells was evaluated using calcein and Ethidium homodimer-1. To investigate whether the captured CECs are pulmonary arterial or venous origin, we performed western blot analysis and assessed the expression of activin receptor-like kinase1 (ALK-1) and Ephrin receptor B4 (EphB4) respectively. To validate our cell-capturing method, we counted the number of CECs in the blood of control and PAH patients using a FACScalibur device.


Results: High cell-capturing efficiencies, ranging between 82.3±3.2 and 91±2.6, are due to increased contact time between flowing cells and the antibody-functionalized surface of HBCEC-chip (Fig.1E). We observed a linear correlation between the number of spiked and captured cells (R2= 0.98) (Fig.1F). The total number of non-EC cells (i.e. CD45+ and DAPI+ cells) showed an average on-chip purity of 71% for our experiments (Fig.1G-H). More importantly, over 94.2% of captured cells were retrievable from the chip (Fig.1G). Studies with whole rat blood suggest that the number of CECs in PAH rat was greater than in control rats and over a 12-week period the number CECs raised as the disease worsened (Fig.2A-G). Additionally, the number of CECs increased with the increase in mPAP in PAH rats, evidenced by an R2 of 0.97 (Fig.2H-J). The results from healthy and PAH patients suggest that the chips can efficiently isolate and capture CECs from human blood (Fig.3A-B). One of the most striking observations was that the number of CECs in PAH patients were five times greater than that in control subjects, irrespective of the markers used for CEC identification. More importantly, the chips coated with doppel antibody captured CECs only from PAH patients, suggesting that doppel only identifies PAH-ECs, not N-ECs or WBC (Fig.3C). Cell viability was close to 90% after cells were retrieved and cultured (Fig.3F-G). Cultured cells were adherent and proliferative, suggesting that the biology of the cells underwent no major alterations (Fig.3H-I). The green fluorescent signal on the cell surface suggests that the cells were originally stained in the whole blood (Fig.3H-I). The number of CECs counted using a flow cytometric method was consistent with that captured by the chips, suggesting a strong correlation between the two methods (R2= 0.95) (Fig.3D-E). When compared with the CECs from control subjects, CECs from PAH patients had higher levels of expression of ALK1 and lower expression of EphB4, suggesting that the captured CECs of PAH patients originated from diseased pulmonary arteries, not from venous vessels (Fig.3K-L).


Conclusion: Here we have shown a novel approach for capturing CECs using a microfluidic device. This microfluidic device represents a potential bedside testing tool for early diagnosis of PAH and monitoring the therapeutic outcome of PAH patients. 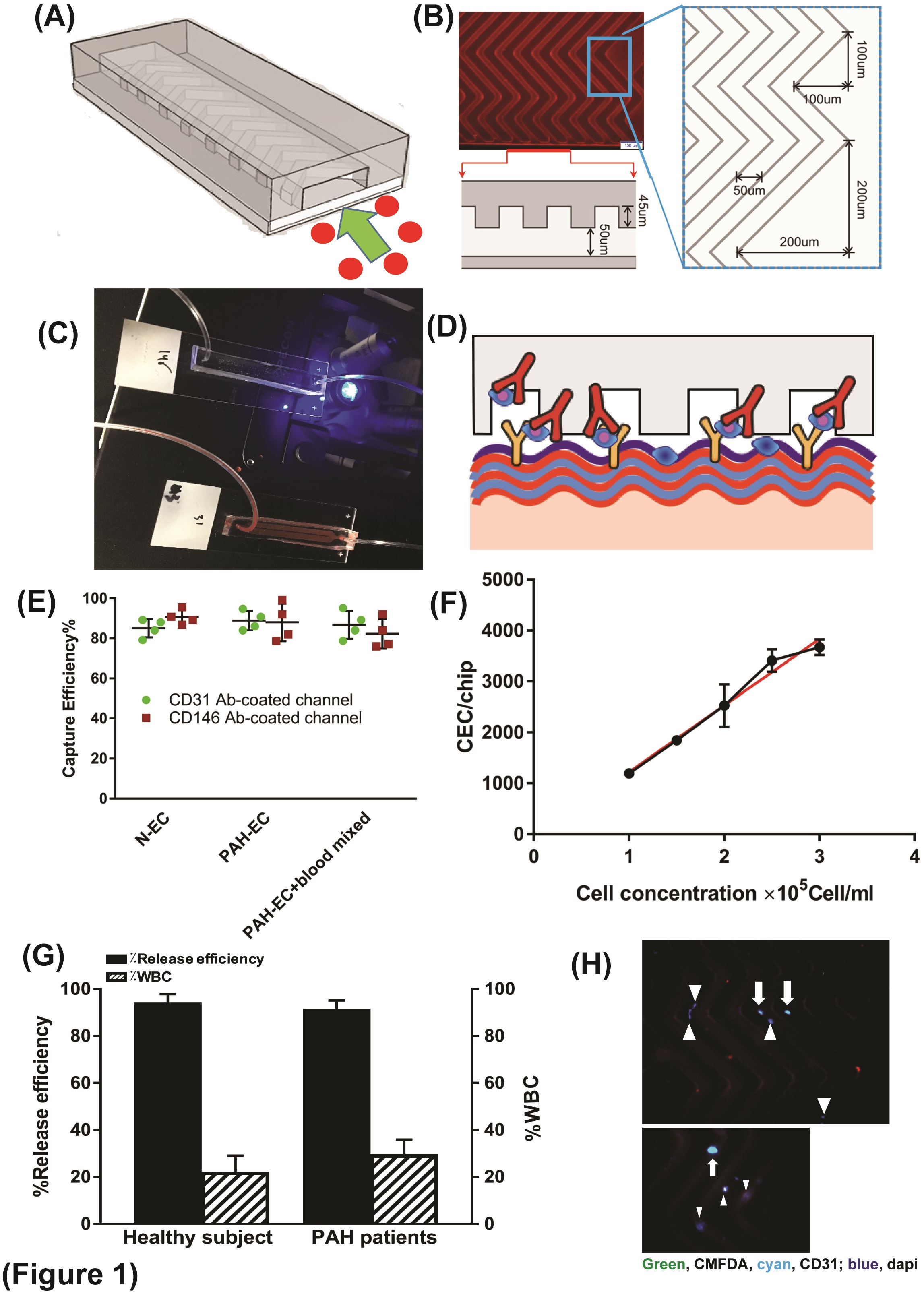 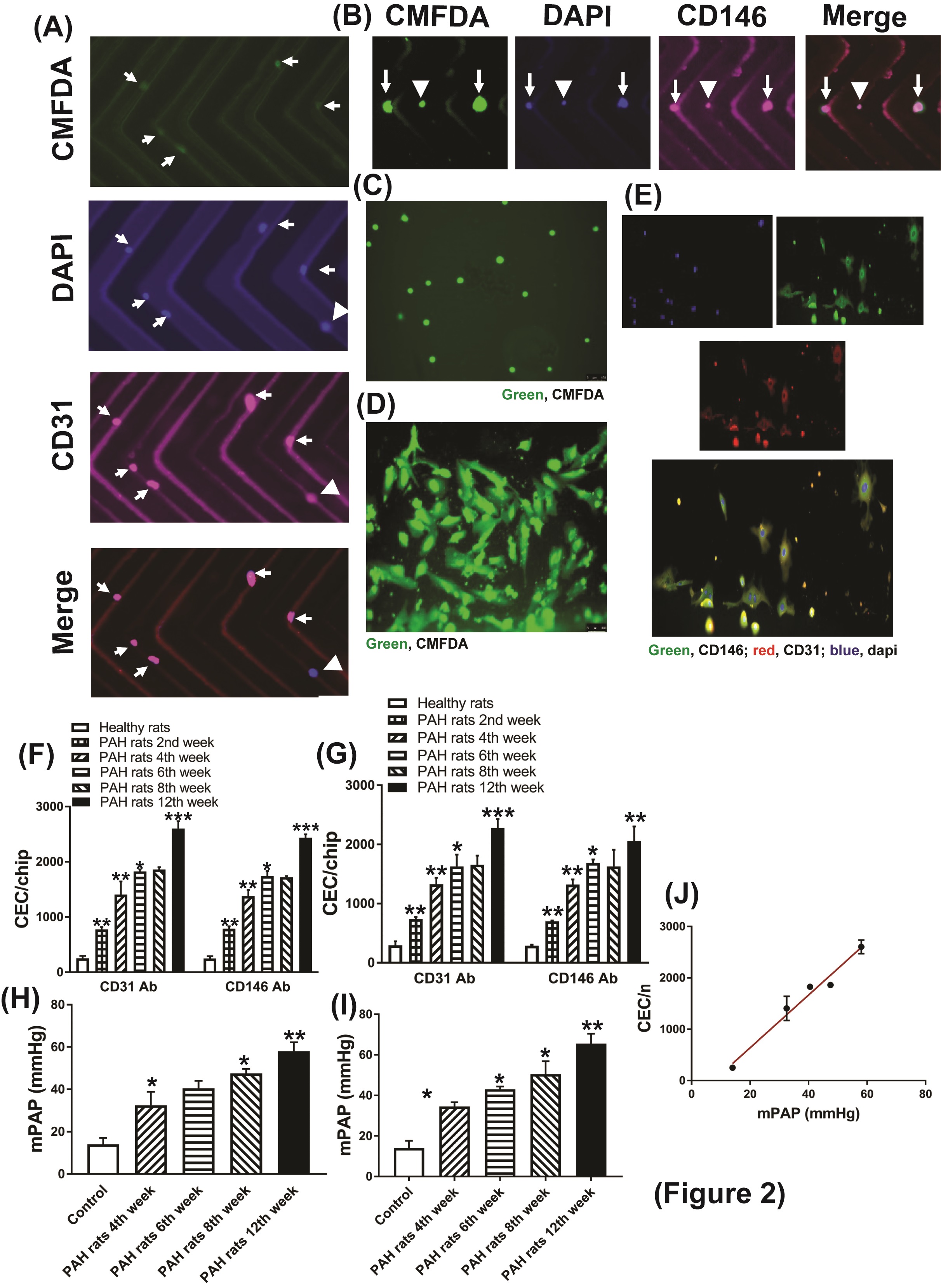 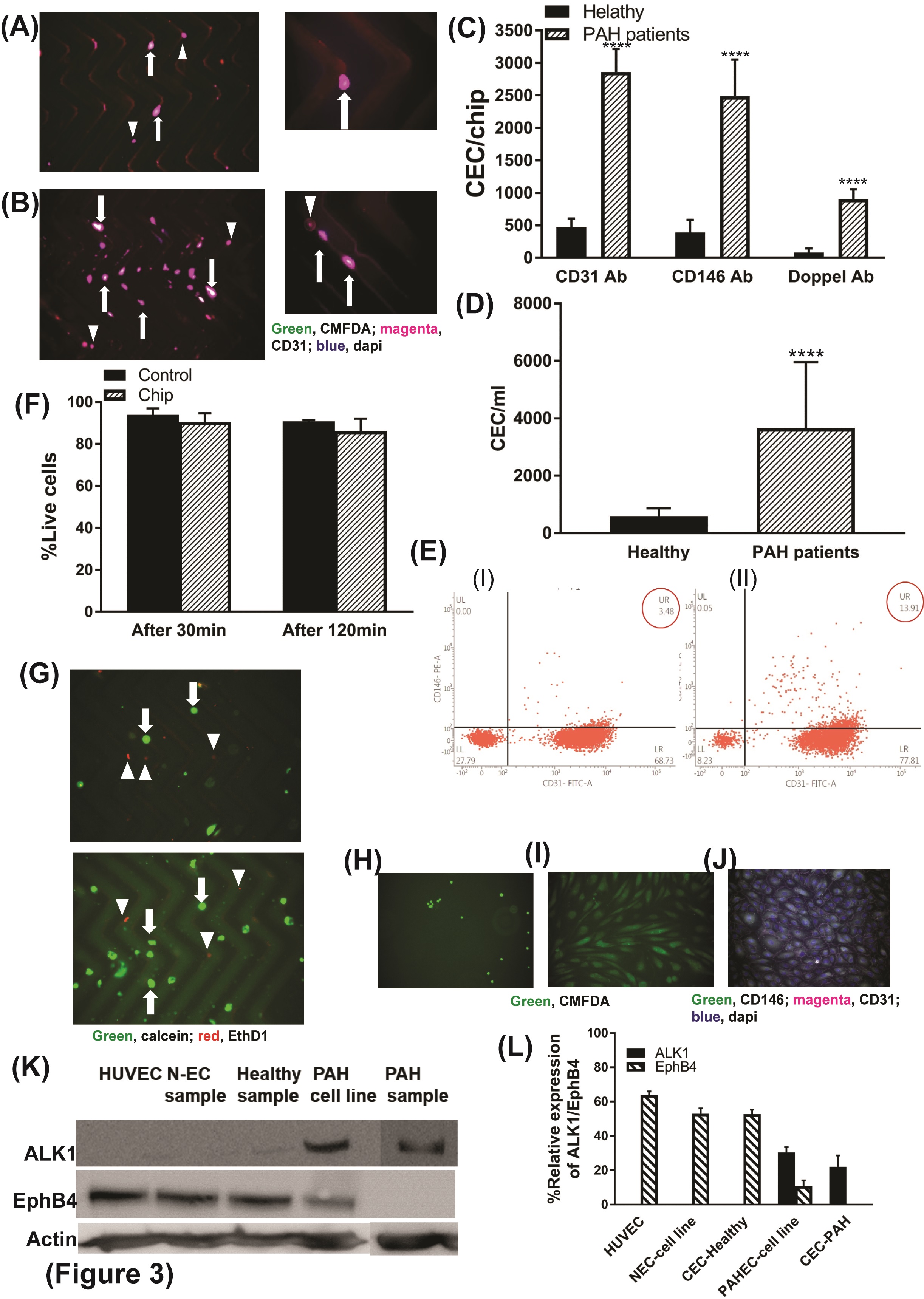