Purpose: Statins are currently the most commonly used drugs to lower LDL-C. However, there is a side effect that muscle toxicity occurs when taking a high dose at long term. DW4301 is a new statin-based drug, and this study was conducted to develop statin with improved efficacy and reduced side effects compared to conventional statin.

2. In vivo study for acute inhibition of cholesterol synthesis by DW4301 in rat. Fasted male Wistar rats were administered DW4301 by oral gavge at doses of 0.1, 1 and 10 mg/kg followed 2 hours later by an intraperitoneal injection of [14C]-acetate(10uCi/100g). After 2 more hours, the animals were sacrificed and the livers taken. Nonsaponifiable lipids were extracted by methanolic potassium hydroxide and hexane. Hepatic [14C]-cholesterol was determined as number of counts per minute/gram of liver.

3. Hepato-selectivity studies of DW4301 at Rat Hepatic and Non-hepatic cells. DW4301, metabolite, rosuvastatin, atorvastatin, and cerivastatin were evaluated for their ability to inhibit cholesterol synthesis in hepatocytes versus myocytes and fibroblasts. The primary hepatocytes were isolated from Wistar rat livers. Nonhepatic cells included lines from NRK-49F (rat kidney fibroblast, ATCC No.CRL-1570) and L6 myoblast (rat skeletal muscle myoblast, ATCC No.CRL-1458). Synthesis of cholesterol was determined by measuring the corporation of radioactive acetate into cellular sterols. Hepatocytes, fibroblasts, and myoblasts were preincubated with drug in serum-free medium for 30 minutes before the addition of [14C]-acetate (2 uCi/well, 56.4 mCi/mmol). Results are expressed as mean counts per minute/milligram of protein.

4. Intrinsic clearance of DW4301 in human, dog, rat, mouse and guinea pig liver microsomes. DW4301 was incubated with various microsomal preparations at a concentration of 0.5 uM and a protein concentration of 0.5 mg/mL. The phosphate buffer was pH7.4 (100mM) and the NADPH regenerating system consisted of NADP+, glucose-6-phosphate, glucose-6-phosphate dehydrogenase, and magnesium chloride. The samples were incubated at 37℃ for 10 minutes. Samples were taken at 3-minute intervals for up to 30 minutes and the reaction quenched.

2. In vivo study for acute inhibition of cholesterol synthesis by DW4301 in rat. Results indicated that DW4301 inhibited cholesterol synthesis in dose-dependent manner following oral administration. The compound was approximately 3-fold more potent compared with atorvastatin or rosuvastatin at a dose of 0.1 mg/kg and about 1.5-fold more potent at 1.0 mg/kg. In addition, DW4301 had an ED50 (0.4 mg/kg) that was far led than atorvastatin (1.5 mg/kg), or rosuvastatin (1.2 mg/kg)(Table 2).

3. Hepato-selectivity studies of DW4301 at Rat Hepatic and Non-hepatic cells. In primary rat hepatocytes, DW4301 was extremely potent in inhibiting cholesterol synthesis. In fact, DW4301 was 183-fold more potent than rosuvastatin, and greater than 1000-fold more potent than atorvastatin, cerivastatin, or metabolite. Given that DW4301 and atorvastatin have a similar activity in vitro to inhibit HMG-CoA reductase enzyme in a cell free system, the difference in potency with respect to cholesterol synthesis in the hepatocyte may be due to a selective uptake of DW4301 by liver cells(Table 3).


Conclusion: In conclusion, the present results suggest that DW4301 showed enhanced cholesterol-lowing effects in liver cells and high hepatic cells selectivity compared with other conventional statins. And DW4301 is not metabolited by liver microsomal preparations, it indicate that DW4301 has low drug interaction potential by liver enzyme. As in additional effect, DW4301 won’t have side effects that muscle toxicity occurs when taking a high dose at long term. 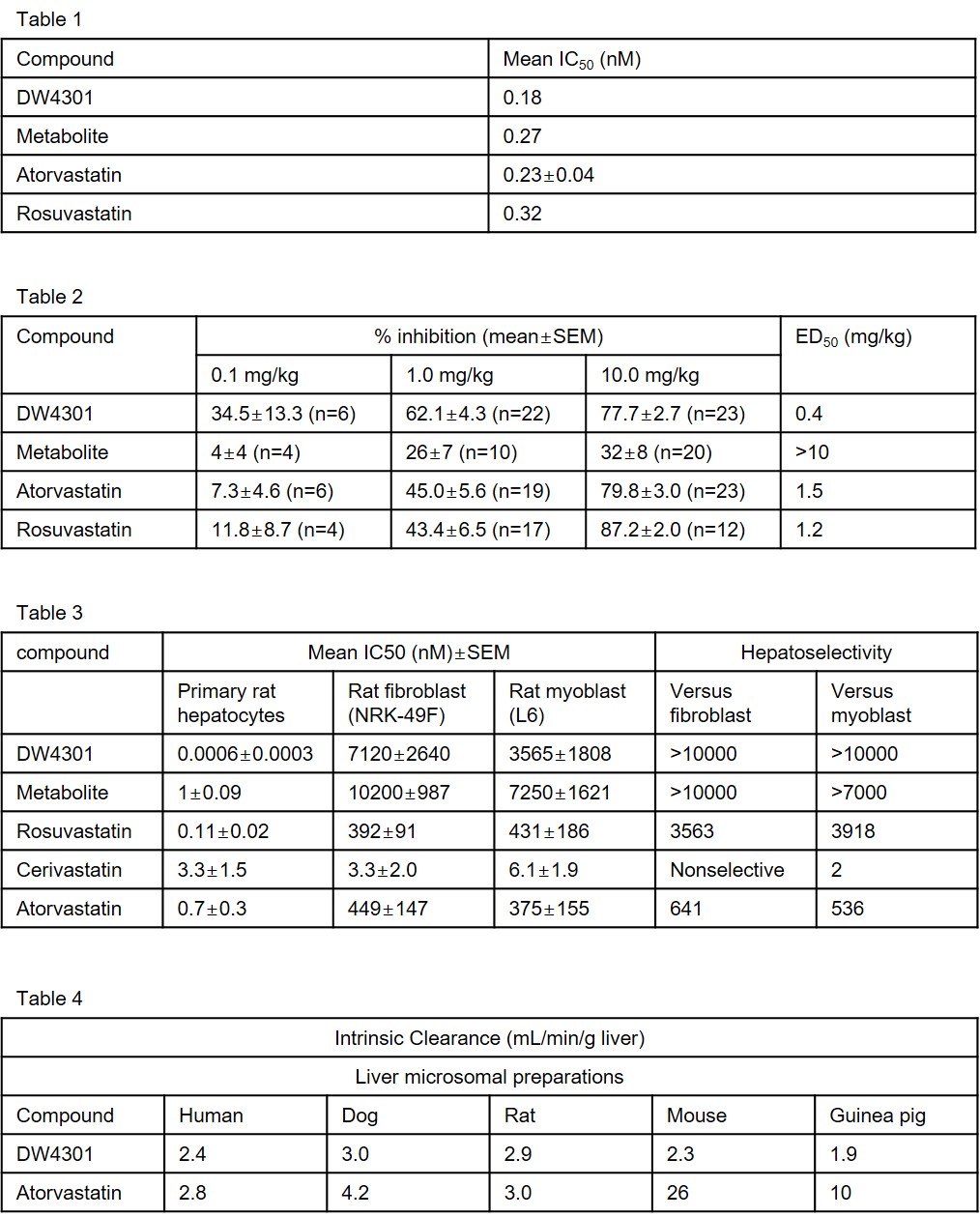