Purpose: This work is focused on formulating and investigating the in vitro physicochemical characteristics of an edible orodispersible hollow-cup carrier containing a model first line anti-tubercular drug, pyrazinamide. This is intended for flexible dosing in paediatric patients infected with Mycobacterium tuberculosis. This antibiotic carrier is designed to be palatable and characterized by rapid disintegration (< 60 seconds) within the oral cavity allowing for easy, water-free administration in paediatric patients which can potentially improve compliance and desired therapeutic outcomes. The global burden of tuberculosis (TB) in children remains high and a significant number of cases occur in those younger than the age of 15 years. According to the World Health Organization global TB report of 2018, up to 1,000,000 children (10-11% of all TB cases) get active TB infection and about 230,000 deaths are recorded annually. The severity of TB in children is considered a global crisis compounded by the scarcity of pharmaceutical formulations suitable for paediatric use. Routinely, treatment schemes employ adult fixed-dose tablets, which are often divided into uneven fragments or crushed and mixed with water or food. These administration approaches often compromise patient adherence as well as pharmacotherapeutic efficacy by interfering with stability, hygiene, pharmacokinetics and bioavailability.


Results: The optimized hollow-cup was whitish, easily collapsible and had an inner concave orientation with an average diameter of 11 ± 1 mm. Pyrazinamide load was 101.13 ± 0.4% and initial matrix collapse occurred under 60 seconds. Drug release was linear over time with 100% liberation taking place under 60 minutes at the point of complete matrix dissolution. Both pure pyrazinamide and carrier showed characteristic FTIR bands at 3426 cm-1 N-H (amide), 3156 cm-1 O-H stretching, 1700 cm-1 C=O, 1374 cm-1 C=N indicating system stability and absence of chemical interactions between drug and excipients. Carrier surface geometry displayed a continuous interface characterized by an even intermolecular distribution of drug molecules. DSC thermograms displayed endothermic peaks at around 191°C - 195°C which coincides with the melting range of pyrazinamide while the slight upper end shift of 195°C may be associated with the presence formulation additives within the hollow-cups. TGA analysis also confirmed the observed thermal behavioral trend with a sharp weight loss pattern recorded between 130°C and 202°C for both pure pyrazinamide and formulation. Carrier surface area and porosity were 2 × 10-4 m2/g and 1 × 10-5 cm3/g respectively which explains the susceptibility of the carrier to aqueous hydration. The hollow-cups were stable under common storage condition over the 12-week period. 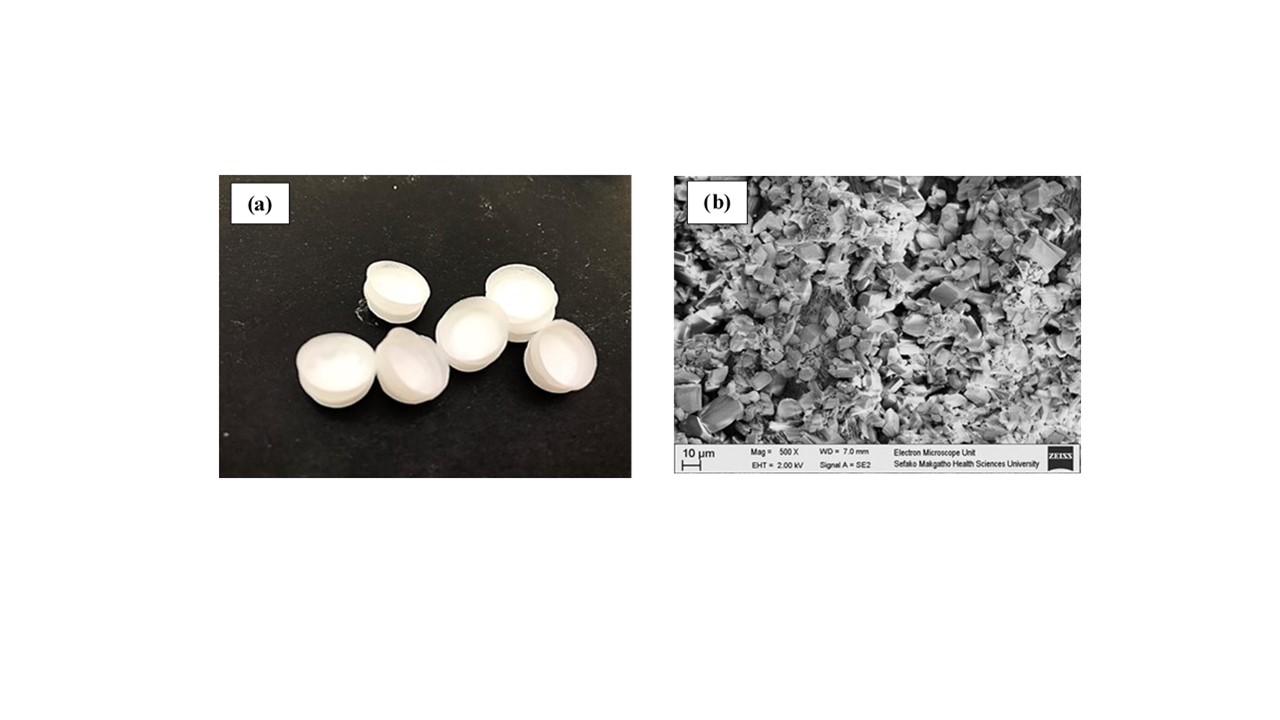