Methods: Granulation experiments were performed using the twin screw granulator of a continuous from-powder-to-tablet line (GEA Pharma Systems). Anhydrous dicalcium phosphate (DCP) was granulated using both dry and wet addition of the binders. The concentration of the dry binders was 5% in the dried granule, based on dry powder mass. Via wet addition, the concentration of the binders in the granules was 1.44% (based on dry powder). In addition, depending on the viscosity of the binder solution, higher concentrations (3 and/or 5%) could be achieved for specific binders. The liquid-to-solid (L/S) ratio was varied from 0.105 to 0.225.

As DCP has a low water solubility, all interactions in the granules are attributed to the binder. Consequently, an acceptable friability of granules (< 30%) can be correlated with better binder effectiveness. A high friability of all granules was observed at 1.44% binder concentration and at a low L/S-ratio. When combining a higher binder concentration with a low L/S-ratio, granules with a low friability were achieved using Lycoat RS 720 and Glucidex 2. At high L/S-ratio, 5% binder could only be processed with PVP K30 and K12, which resulted in a very low granule friability for PVP K30 (6.9%).

Comparison between the addition methods
For the wet addition of a binder, the binder solution is prepared upfront. This solution is characterized by a certain viscosity which determines the processability of the binder during wet granulation. Consequently, some binders could only be incorporated in the dried granule at a low binder concentration, while dry addition of a binder allowed to process highly viscous binders as well as insoluble binders. 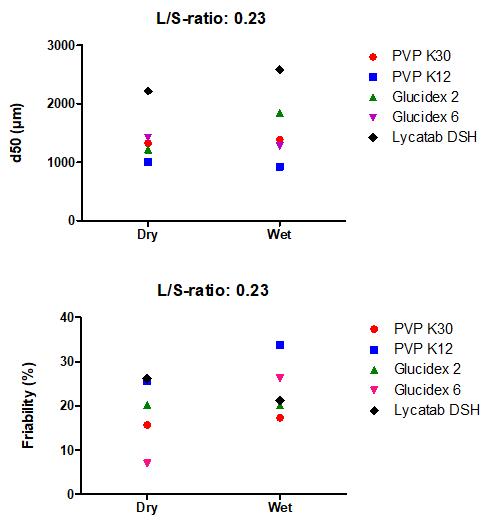