Purpose: The increased use of copper oxide nanoparticles (CuO NPs) has raised the concerns as to the potential risks to health, especially for workers in industry where CuO NPs are generated. Inhalation exposure of CuO NPs can lead to pulmonary inflammation and airway hyperresponsiveness, making the workers more susceptible to developing asthma or asthmatic-like symptoms than the general population. Allergies and allergic asthma can result from a range of allergens that people are exposed to in daily life such as house dust mite allergens. One way of potentially combatting allergic asthma is through vaccines. Recently, in our laboratory, an experimental house dust mite (HDM) vaccine was developed from three main components: DerP2 (a HDM derived antigen/allergen), CpG-ODN type B (an adjuvant/Toll-like receptor agonist), and PLGA (a biodegradable polymer: poly(lactide-co-glycolide)) as a vector. The goal of this project was to investigate the effect of inhalation exposure to CuO NPs on the efficacy of a vaccine protecting against HDM allergy.


Methods: A HDM vaccine was prepared in two steps. First, CpG loaded PLGA particles were prepared by double emulsion solvent evaporation. Subsequently, the particles were exposed to HDM extract to allow for surface adsorption of the allergen to the particles immediately prior to vaccination. In a preliminary study, we determined the HDM extract dose capable of generating asthma symptoms and tested the HDM vaccine to prove its efficacy. The asthma model involved BALB/c female mice that were sensitized with 100 µL of 1 mg/mL HDM extract in saline by subcutaneous injection at day 3 and 10 and then challenged with 50 µL of 0.5 mg/mL HDM extract in saline by intranasal instillation for 10 consecutive days (day 17 to 26). Mice in the vaccine group were additionally vaccinated subcutaneously with 100 µL of 100 µg HDM extract and 10 µg CpG particles in succinate buffer on days 0 and 7. Sera, bronchoalveolar lavage fluid (BALF), and lung tissues were collected post-mortem and results were collated so as to compare the amount of inflammatory cells in the BALF, levels of cytokines in the BALF, levels of antigen specific antibodies in the sera, and the histopathology in lung tissues in the various groups. To study the effect of CuO inhalation exposure overtime in 27 days (experimental endpoint), mice were exposed to 50 nm CuO NPs (aerosolized) at a concentration of 3.5 mg/m3 using a nose-only exposure system intermittently over a 2-week period (equivalent to 40 hr) and were necropsied at day 0, 3, 7, 10, 12, 17, 22, and 27. Sera, BALF and lung tissue were collected to measure cytokine levels, the number of inflammatory cells, and histopathology of lung. Whole blood, lung, brain, heart, kidney, liver, spleen, and lymph nodes were collected to measure Cu2+ concentration by inductively coupled plasma mass spectrometry (ICP-MS).


Results: We first manufactured CpG-loaded PLGA particles and characterized them. Results showed an average particle size of 571 nm as measured by scanning electron microscopy (SEM). The loading capacity of CpG was 2.44 µg/mg particle. Mice exposed with HDM extract showed a significant increase of the total number of inflammatory cells (eosinophils, macrophages and lymphocytes) compared to the control group (Figure 1 and 2). Mice receiving the HDM vaccine showed a significant increase in the number of lymphocytes compared to HDM group (Figure 2c). The effect of CuO inhalation exposure at different time points showed a tendency towards increased numbers of total inflammatory cells (Figure 3).


Conclusion: CpG loaded PLGA particles were successfully prepared by double emulsion solvent evaporation. The asthma model in BALB/c mice is promisingly successful as there are significant increases of the number of total inflammatory cells and eosinophils which indicate pulmonary inflammation. However, to confirm the suitable HDM dose for generating the asthma model and the HDM vaccine efficacy, antigen-specific antibodies and cytokine levels needed to be determined. Mice exposed to CuO NP aerosol had an increasing trend in the number of total inflammatory cells over 27 days which confirmed that CuO NP exposure has an inflammatory effect until the experiment reaches the endpoint when testing the effect of CuO exposure on HDM vaccine. The experiment for CuO NP inhalation exposure is ongoing to determine the concentration of Cu2+ in several organs, cytokine levels, and the histopathology of the lung tissue. 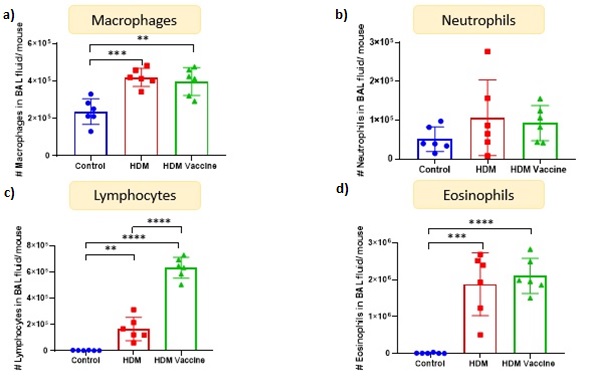 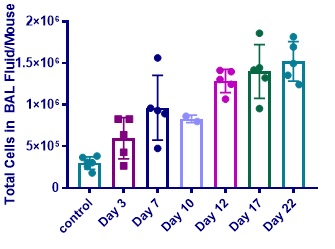