Purpose: To investigate the role of sugars and polyglycols in the stabilization of helical peptides

CD Analysis: CD-UV analysis was done on a Jaso-810 CD spectrometer with an attached Peltier, and 0.1 cm quartz cuvette. CD spectra were recorded in triplicate with a scan rate of 100min/min, 1mm slit width with excipient/buffer solutions as blanks. HT values did not exceed 600 V for recorded data. Full scan spectra were acquired from 200-260 nm and 2-25°C. Thermal denaturation were carried by ramping the temperature from 1°C to 55°C at a rate of 0.5°C/min. Samples were prepared at 130 μM peptide concentration with varied concentrations of carbohydrate (0 to 1.5M) and PEG (0 to 0.187M) excipients in water or PBS buffer.

Data Analysis: Percentage of helicity was calculated according to the following equation:

where θexp is the recorded molar ellipticity (MRE) in deg cm2dmol at 222 nm, θu is the theoretical max MRE of an uncoiled peptide, θh is the theoretical max MRE of 100% helix peptide, were θu is calculated from (T in °C) and (x is a constant used to correct nonhydrogen bonded carbonyls with a value of 1 in this study). The data of similar peptide is assumed to follow a two-state model and be monomeric over a wide concentration range(1-4). ΔH, Tm were estimated from monitoring MRE θ222 change over temperature. ΔH was estimated from plotting In Keq over 1/T, where Keq = [F]/[U] (folded/unfolded) determined by calculating fH at each temperature point.


Conclusion: All four excipients enhanced the helix folding of the 16-residue peptide. Moreover, the excipients used in this study stabilized the helix formation in the thermal denaturation of the AQY peptide in sucrose solution. 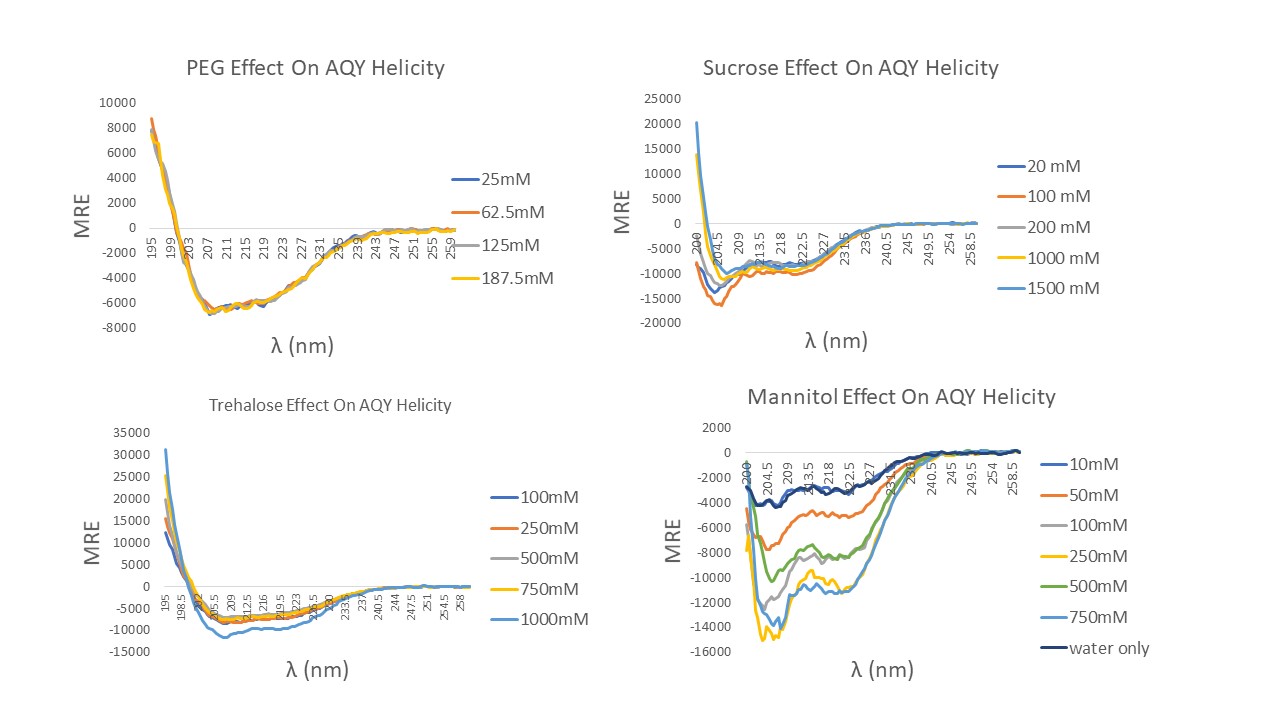 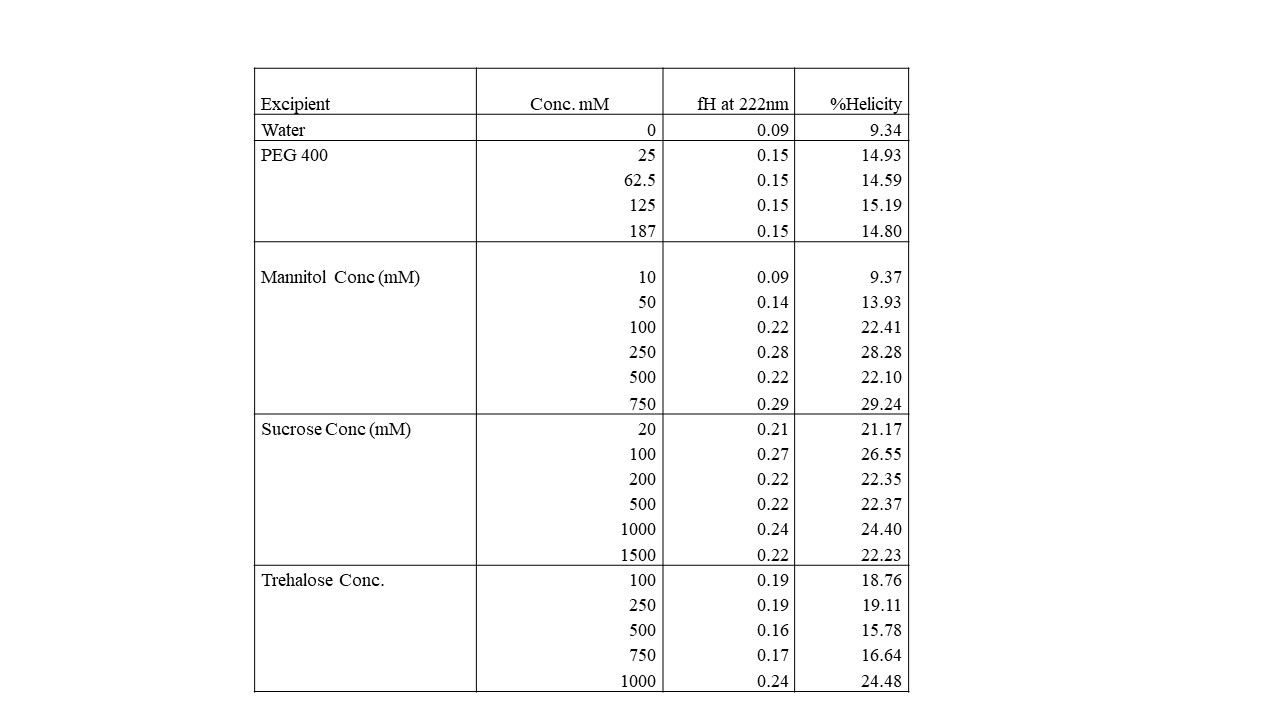 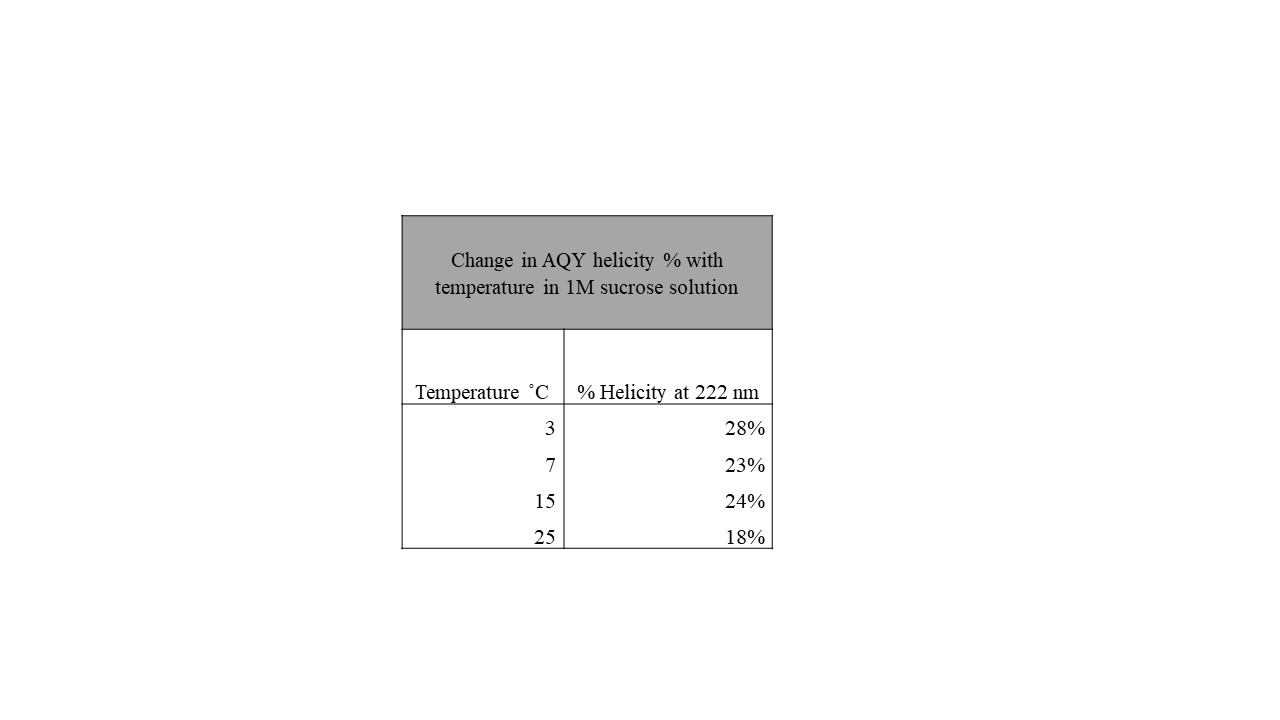