Purpose: Polyethylene oxide (PEO) is used in abuse deterrent formulations because the mechanical properties of the polymer produce crush and extraction resistant dosage forms. The crush resistant properties can be enhanced by thermally annealing PEO tablets. We investigated the effects of binder choice (plastic microcrystalline cellulose, MCC, vs. brittle dibasic calcium phosphate, DBCP) and weight percent PEO on the fracture resistance of a formulated tablet with the model drug Propranolol HCl. We evaluated the tamper resistant properties of the tablets using a coffee mill. Since extraction resistance is also a key performance parameter, we measured the force to take up and dispense solutions made from the manipulated tablets.


Methods: The formulation (20% Propranolol HCl; 30, 50 or 70% SENTRY™ POLYOX™ WSR N12K [MW of approximately 1,000,000]; 9.5, 29.5 or 49.5% Avicel® PH 102 MCC or DBCP; and 0.5% Magnesium Stearate) was compressed into tablets (150g, 0.25” round flat-faced) in a Manesty Beta press at 4500 lbf (speed of 13 rpm). Half of the tablets were thermally annealed in an oven at 80 °C for 35 min (remainder unannealed). Prior to running the fracture test, the tablets were notched with an end-mil to a depth of 15% of the total height of the tablet, then a 10% height pre-crack was made with a razor blade. The fracture resistance was measured with a Texture Analyzer TA.XT Plus fitted with a wedge (30 degree angle, 0.08 lb preload force), speed of 0.2 in/min, forcing the tablet apart until failure. Tablets were ground in a Black & Decker Smartgrind mill for four pulses of 30 sec each with about 2 seconds rest in between. The particles were analyzed for equivalent projected circular (EQPC) diameter using a Sympatec QICPIC. 200 mg of the manipulated formulation was mixed with 5 ml of room temperature MilliQ water. Withdrawal and injection force required for each formulation were evaluated by TA.XT equipped with a 5 ml syringe accessory fitted with a 21-gauge (blunt) needle. The syringe plunger moved 40 mm in each direction with 60 second hold time. The tablets were tested for propranolol HCl dissolution in a Distek 2100 (Apparatus II modified with an off center stationary hanging basket, 37°C, 900 mL of pH 7.4 phosphate buffer, 289 nm). Each sample was run in triplicate.

The work necessary to withdraw solution into a syringe increased with increasing PEO content. The work for solutions made from ground tablets of 30 wt% PEO were 20000-26000 gf-mm and increased to 27000-39000 gf-mm for the 70 wt% PEO tablets. No significant difference was observed between the annealed and unannealed samples nor between binder types.

No significant differences in drug dissolution were observed between the annealed and unannealed tablets, nor the binder type. There was a minor dependence on the wt% of PEO in the tablet: 30 wt% PEO tablets had faster dissolution rates than 70 wt% PEO tablets.

The tablets made with brittle DBCP had higher tear/fracture resistance than tablets made from plastic MCC. However, the choice of binder did not have a significant effect on the results of the manipulation tests. 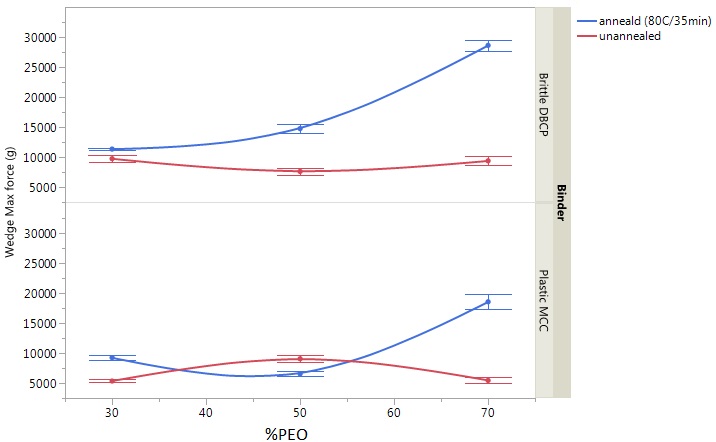 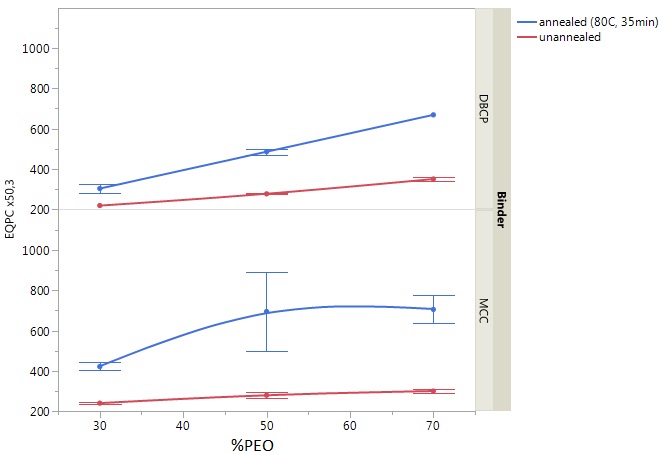 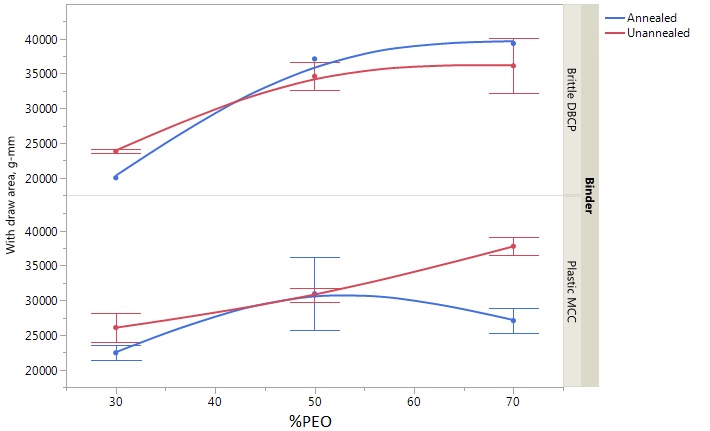