Purpose: Chemical warfare agents such as arsenicals can affect a large population when used in a battlefield or against civilian population by terrorist. In such an unlikely event, fast and effective antidotes are desired. 4-Phenylbutyric acid is a molecular target-based antidote against arsenicals being developed in our laboratories. We found that it is effective in blocking injury caused by cutaneous exposure to these chemicals. The purpose of this study is to optimize rapid delivery of high dose of 4-Phenylbutyric acid through the use of chemical enhancers such as oleic acid, oleyl alcohol and ethanol.


Results: At the end of the first 24 h study, cumulative drug amount in receptor was analyzed and there was no significant difference observed among the groups. However, the flux values were different for each group in the first 8 hours. Drug dissolved in 2.5% oleic acid had the highest flux at 155.69 μg/cm2/h, whereas, for the control group, the flux value was 76.49 μg/cm2/h. Based on these data a second study was conducted. At the end of 8h study, for the control group, the cumulative amount of drug permeated through the skin was found to be 245.17±25.65 µg/cm2, whereas for 4-PBA dissolved in 2.5% oleic acid in PG group, the amount delivered was significantly enhanced to 1825.42±112.90 µg/cm2. The permeation profile for both groups are shown in Figure.1. For the group containing a finite dose of 0.9mg PG as vehicle in donor of Franz cells and oleic acid as chemical enhancer, the cumulative amount of drug permeated through the skin was observed to be, 993.63±34.18 µg/cm2. When compared with the group containing the same formulation but an infinite dose (1.8mg), a significant difference in the cumulative amount of drug permeated was found, at the end of 8h.(Figure 2). Another formulation using ethanol as an enhancer was also investigated in this study. A direct comparison was drawn among the control group, glycerol, ethanol and water mixed at a ratio of 1:1:1 group and drug dissolved in 2.5% w/w solution of oleic acid in PG group. Cumulative amount permeated was significantly different for both the test groups when compared with the control. The group containing oleic acid as an enhancer showed significantly higher permeation when compared with the ethanol group (Figure 3)


Conclusion: Delivery of 4-Phenylbutyric acid across skin was demonstrated and was significantly enhanced by using oleic acid as a chemical enhancer. The flux profile suggests that a large quantity of the drug can be delivered very fast across skin, which is desired to provide a fast and effective antidote to a chemical warfare attack. 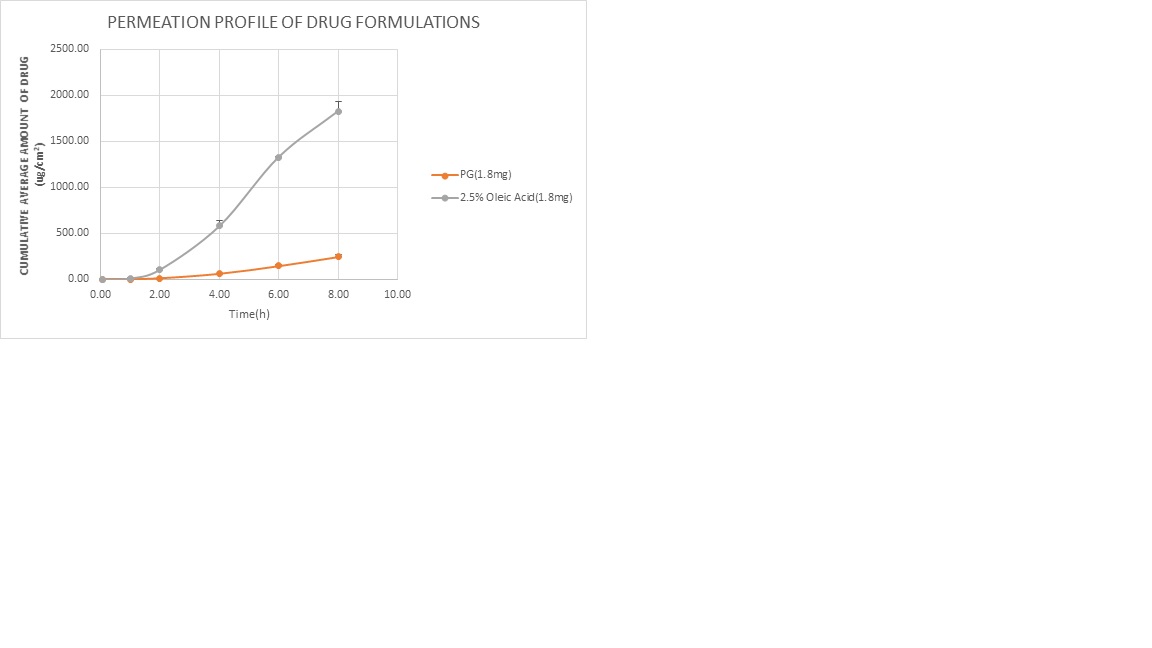