Purpose: The administration of therapeutic protein (i.e., drug) into animals in preclinical studies is often associated with the generation of anti-drug antibodies (ADAs) in many of these animals, which may affect the quantification of the drug in downstream pharmacokinetic (PK) analysis. In fact, ADA interference on drug quantification has been well documented. Acid-treatment procedures are a critical step for successful dissociation of ADA-drug complexes present in the sample and have been widely used to increase the drug tolerance in ADA assays. However, acid-treatment has rarely been incorporated in PK assays to reduce the effect of ADA interference on quantification of the drug.

To evaluate the impact of ADAs on the quantification of a monoclonal antibody drug candidate, an established PK method, which is believed to be capable of detecting total drug (i.e., both free drug and ADA-bound drug), was evaluated for the ability to quantify the ADA-Drug complex. In addition, an acid-treatment procedure was optimized and introduced into the PK assay method to reduce the ADA interference on quantification of the drug.


Methods: Polyclonal sheep anti-human IgG antibodies were used as the capture antibody and coated onto a standard bind Meso Scale Discover (MSD) plate. A human monoclonal antibody, henceforth referred to simply as the drug, was used to prepare calibration standards and quality control (QC) samples in cynomolgus monkey serum. A biotinylated goat anti-human antibody was used as the detection antibody in combination with SULFO-TAG-labeled streptavidin. The polyclonal sheep anti-human antibodies were also utilized as the anti-drug antibody positive control. An acid treatment procedure was introduced to the previously qualified PK method, creating a new PK method. Inclusion of the acid treatment procedure was the only difference between the two methods.

Briefly, the 96-well MSD plate was coated with sheep anti-human IgG overnight, then washed 3× and blocked for at least an hour. For the previously qualified PK method, STDs/QCs/SPLs were diluted to the minimum required dilution (MRD) in assay buffer then loaded into duplicate wells of the MSD plate. For the newly developed PK method, STDs/QCs/SPLs were diluted in assay buffer containing a final concentration of 333 mM acetic acid for 30 minutes, then neutralized using Tris Buffer prior to loading the samples on the MSD plate; the final sample dilution was the same for both methods. After sample incubation for 2 hours, the plate was washed, then detection solutions (biotinylated-goat anti-human IgG and SULFO-TAG-labeled streptavidin) were applied to the plate sequentially for 1 hour each with a wash in between. The plate was washed a final time and 1× read buffer was added to the plate. The resulting electrochemiluminescent signals were measured using an MSD SECTOR S 600 plate reader.


Results: Assay runs using both PK methods met the assay acceptance criteria. Calibration curves for the drug were generated using a 5 parameter logistic algorithm model with 1/y2 weighting for both methods and are presented in Figure 1.


Conclusion: The conventional PK assay designed for quantification of total drug can accurately quantify drug even in the presence of a similar concentration of ADA. However, the conventional PK assay failed to tolerate ADA at higher concentrations. Incorporating an acid-treatment procedure improved the ADA tolerance of the assay significantly when ADA was 10× more concentrated than the drug. Although the impact of ADA could not be eliminated when ADA was 100× more concentrated than the drug, the inclusion of an acid treatment procedure should still be seriously considered as an effective and simple means to reduce ADA interference on traditional PK assays. 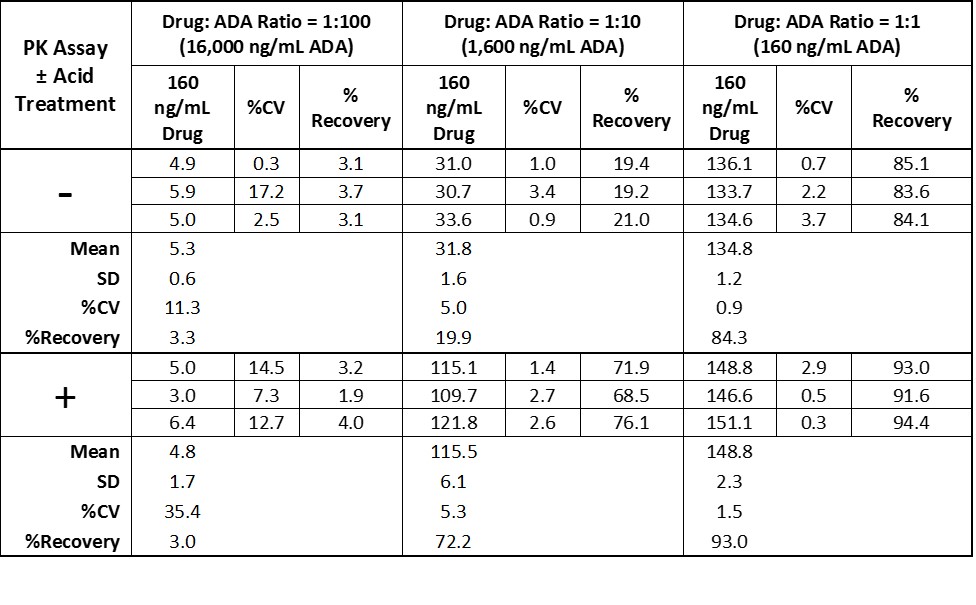