Purpose: An effective drug treatment for peptic ulcer and reflux esophagitis is the proton pump inhibitor (PPI). Lansoprazole is a PPI-based drug and its therapeutic effect is excellent. Despite the excellent therapeutic effect, however, the lansoprazole is very sensitive to acidic decomposition and has a difficulty in commercializing due to the problem of re-precipitation. Therefore an enteric solute capsule was prepared using sodium alginate and wet granulation process. This formulation aimed to inhibit release in acidic conditions of stomach fluid and to cause rapid drug release under conditions of intense, neutral or weakly alkaline conditions.


Methods: Lansoprazole and sodium alginate for drug inclusion were added in the same ratio, and MCC, SSG and L-HPC were added by disintegration, PVP K30 was added as a binder and mixed uniformly. The mixed mixture was wet granulated by adding 50μl of 10% aquaous ethanol solution 10 times. The granules were then filtered using a 600μm mesh and dried in an oven. The hard capsules were filled with the granules according to the total amount of each batch and used for the dissolution test. DSC analysis was conducted to determine the thermal transfer of lansoprazole and sodium alginate used in the inclusion and to confirm that the granules were normally. Crystallinity was analyzed by XRD in order to confirm whether the granules were folded normally. Lansoprazole, sodium alginate and the molecular structure of each prepared granulate was analyzed and analyzed using FT-IR to confirm that a new chemical bond was generated. The particle status and surface of the raw drug, sodium alginate and granules were analyzed using scanning electron microscope. The dissolution test was conducted to evaluate the dissolution rate and analyzed by HPLC. 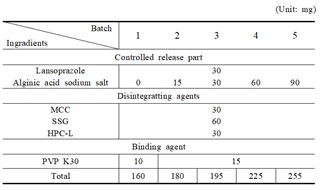