Purpose: Self nano-emulsifying drug delivery system (SNEDDS) are the isotropic mixture of oil, surfactant and co-surfactant which upon dilution in aqueous medium tend to form transparent emulsion. This technique has been extensively explored to improve the oral bioavailability of lipophilic as well as gastrointestinal labile drugs. However, the common challenge associated with them is stability during storage, precipitation of drug/excipients when stored at lower temperature, and interaction between the filling and the capsule shell. Hence, solidification of emulsions using solid porous carrier either by their direct adsorption on the surface of porous carriers or through spray drying offers better flow property and storage stability to the formulation. Most widely used carriers are mesoporous silica, lactose, magnesium stearate etc. because of their high surface area. However, mesoporous silica has its inherent challenges associated with it such as silica related toxicity as well as poor compressibility. Lactose is another option but it is required in high amount. Hence, the purpose of present research is to explore synbiotics as solidifying agents to convert liquid SNEDDS (L-SNEDDS) into free-flowing powder, which upon re-constitution should be able to retain its physico-chemical properties such as droplet size, emulsification time and release behavior. Additional advantage of using synbiotics over other carriers is their safety and efficacy in maintenance of healthy gut microbiota.


Methods: In order to achieve the afore-mentioned purpose, L-SNEDDS (0.5mL) were prepared using Labrafil M1944CS (20%v/v) and Capmul MCM (10%v/v) as oils, Labrasol (30%v/v) and tween 80 (30% v/v) as surfactants and Transcutol P (10%v/v) as co-surfactant. Curcumin (10mg) as model drug, was added to the mixture. The mixture was solidified using one gram of synbiotics [0.5g of probiotic (Lee Biotic) and 0.5g of mushroom extract (Ganoderma lucidum) containing 60% w/w of polysaccharide as prebiotic] as carrier material. Aerosil 200 (0.2g) was added as coating material. The powder blend was diluted to 500mL water and subjected for spray drying. The drying conditions were- inlet temperature (120ºC), outlet temperature (60ºC), feed pump speed (15rpm), aspirator speed (1500 rpm) and atomization pressure (2 kg/cm2). The obtained solid SNEDDS (S-SNEDDS) powder was subjected to micromeritic studies. The L-SNEDDS and S-SNEDDS were characterized for percentage drug loading, droplet size, zeta potential, cloud point and in-vitro powder dissolution studies. The powder dissolution study was carried out in USP II dissolution apparatus in 0.1N HCl (900 mL) at 50 rpm for 60 minutes. The L-SNEDDS and S-SNEDDS powder containing curcumin equivalent to 10mg as well as unprocessed curcumin (10mg) were accurately weighed and filled in size zero capsule shells. These capsules were kept in stainless steel sinker of 21.3 ×9.4 mm dimension and then subjected to dissolution apparatus. Moreover, the integrity of S-SNEDDS in maintaining size and drug release upon reconstitution was compared with their L-SNEDDS formulation. The entire scheme for the formulation process is shown in figure 1.


Results: The angle of repose, Hausner’s ratio and Carr’s index were found to be 32.1 degrees, 1.19 and 18.75 which indicated good flow and fair compression properties. The percent drug loading was found to be 93.21±2.34% and 87.33±3.32% for L-SNEDDS and S-SNEDDS respectively. The mean droplet size and zeta potential of L-SNEDDS were found to be 38.68±2.15 nm and -9.92 mV and for S-SNEDDS were found to be 51.18±3.32 nm and -8.14 mV. The cloud point of liquid as well as solid SNEDDS was above 90 degree Celsius, indicating thermodynamic stability of formulations. The in-vitro dissolution study revealed more than 90 percent drug release within first five minutes from the L-SNEDDS as well as S-SNEDDS (figure 2). Whereas, only 3.85% drug release was observed from the unprocessed drug. This indicated about 25 folds increase in drug release from liquid as well as solid SNEDDS as compared to unprocessed curcumin. It is important to note that there was no significant difference (p< 0.05) observed between the droplet size, zeta potential as well as dissolution profiles of liquid and solid SNEDDS indicating the integrity of formulation upon solidification.


Conclusion: Present research has shown successful conversion of liquid SNEDDS in solid free flowing powder using synbiotics as carriers. This study has been reported for the first time and provided new platform to utilize nutraceuticals such as synbiotics for solidification of SNEDDS. Moreover, it has provided a new direction to the scientists working in the area of nutraceuticals to treat metabolic or gastrointestinal disorders to use synbiotics as solidifying agents. This can serve dual role, as an excipient as well as nutraceutical along with other drugs due to its pharmacological benefits such as maintaining gut dysbiosis, reduction of dyslipidaemia, β-cell improvement and insulin releasing activity. 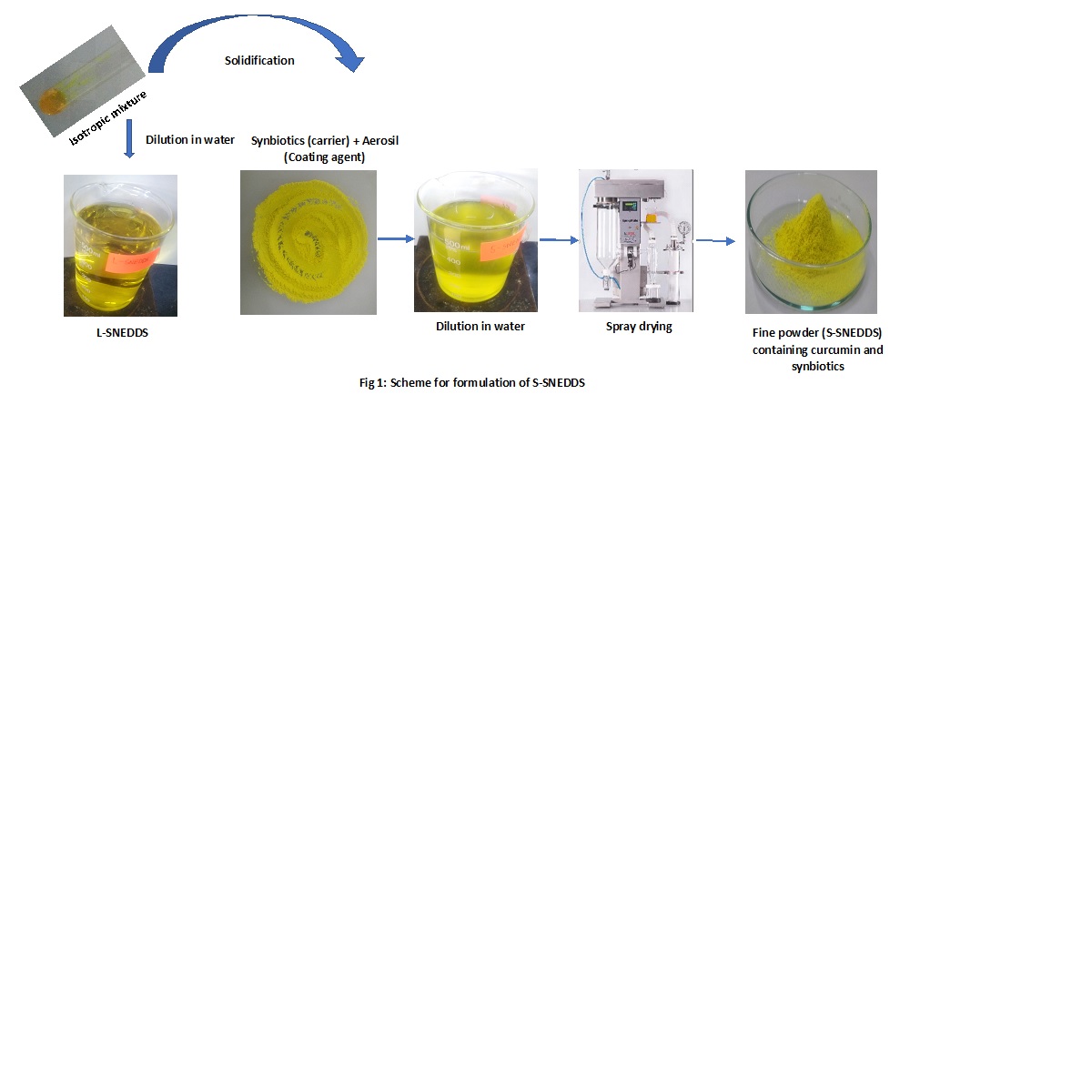 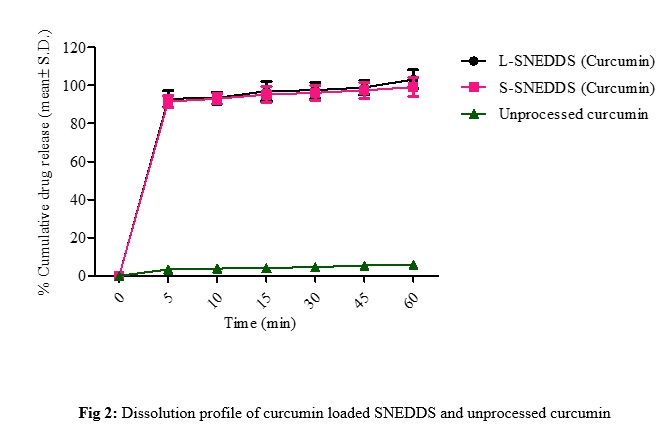