Purpose: The Blood-Brain Barrier (BBB) is a major obstacle in getting large molecules such as oligonucleotides (ODN) across to the brain for treating neurological disorders. Small molecule drugs need to be designed specifically for BBB penetration. The situation is more difficult for macromolecules. Intracerebroventricular route is the most widely used technique preclinically, which would have limited clinical utility, necessitating an invasive procedure. Polyethyleneimine (PEI) has been the most widely used non-viral vector for delivering genes and ODN. However, the higher molecular weight PEI are toxic and without appropriate shielding they agglomerate and get easily taken up by reticuloendothelial system. Hydroxyethyl starch (HES)-polyethyleneimine conjugates has recently shown promising results in delivering genes in vitro. For delivering ODNs, we have produced biotinylated versions of HES-PEI conjugates with different molecular weights that can easily be linked to transferrin receptor antibody-Streptavidin (8D3-SA) conjugates for targeted delivery to the brain. However, since our polymer conjugates have differing molecular weights compared to literature, preliminary studies are necessary to elucidate the best conjugate that would suit our purpose.


Methods: HES-PEI conjugates having combinations of different molecular weights (10 or 20 kDa HES, 4 or 20 kDa Linear PEI) were synthesized by Schiff’s base formation followed by reductive amination as depicted in figure 1. To ensure 1:1 conjugation with PEI, a molar excess of HES was used. The conjugates were then subjected to cation exchange chromatography and dialysis for purification, followed by lyophilization. The optimum conjugate was then selected based on cytotoxicity assay, erythrocyte aggregation assay, particle size analysis, zeta potential measurements and oligonucleotide condensation assaywith Ethidium Bromide. Particle size analysis, zeta potential measurements and condensation studies were done with NFΚB decoy ODN having the following sequence 5’ -CCTTGAAGGGATTTCCCTCC-3’ and 3’ -GGAACTTCCCTAAAGGGAGG-5’. The studies were done in different n/p ratios (3:1, 6:1 and 9:1) in absence or presence of serum and at different HES-PEI:PEI mixtures (50:50 and 10:90). The effects of shielding and deshielding were also determined by measuring changes in particle size in presence or absence of alpha amylase. 3 different biotinylation routes were tested on the optimal conjugate to determine the best approach (Figure 1). The HES moiety or the PEI moiety of the conjugate was biotinylated with Biotin-PEG4-Hydrazide or Biotin-PEG4-NHS respectively. Biotinylated compounds were purified and lyophilized. The degree of biotinylation of the conjugates were then assessed by the HABA assay. The uptake of 8D3SA alone was assessed through saturable uptake kinetics of 8D3SA linked to 3H-Biotin as well as flow cytometry-based uptake analysis in Bend3 cell line. Uptake studies on polyplexes prepared from the optimal conjugate, 8D3SA-Bio-HES20-PEI4, were done on Bend3 cells grown on cover slips. The uptake of the fluorescent labelled conjugate polyplexes compared to untargeted conjugate polyplexes and ODNs alone were then assessed using confocal microscopy.


Results: The erythrocyte aggregation assay, DNA condensation study, particle size and zeta potential analysis in presence or absence of serum showed the HES moiety effectively shielded the PEI from aggregation. Different molecular weight conjugates had differing shielding effects. The HES-PEI conjugates prepared with 4 kDa PEI had significantly lower cytotoxicity compared to 20 kDa PEI when incubated with Bend3 cells alone or as a polyplex with ODNs. HES20-PEI4 polyplexes were found to be the most optimal for our purpose having a particle size within 120 nm and zeta potential under +10 mV. The HABA assay showed that each HES-PEI molecule was biotinylated with approximately 1-2 biotin molecules. Biotinylation of PEI moiety favored particle sizes within 150 nm compared to HES-PEI conjugates with biotinylated HES moiety which had higher particle sizes. After forming polyplexes the exposed biotin molecules were reduced to half compared to free polymers. HES20-PEI4-Bio polyplexes were also found to stay stable after deshielding for 6 hours in presence of alpha amylase. Conjugates prepared with 20 kDa linear PEI produced particle sizes higher than 200 nm indicating they are unsuitable for uptake studies. Radiolabeled saturable uptake study as well as flowcytometry based uptake studies confirmed the uptake of 8D3-SA by the Bend3 cells. Higher uptake of fluorescently labelled 8D3 targeted polyplexes was confirmed through confocal microscopy compared to untargeted control and ODN.


Conclusion: In conclusion this study shows the development of a novel targeted delivery system for delivering ODNs to the brain endothelium. The targeted polyplexes have optimal particle size, shielding and zeta potential for in-vivo application. Whether or not these polyplexes will be able to undergo transcytosis along with the targeting antibody to the brain parenchyma need to be studied in vivo. 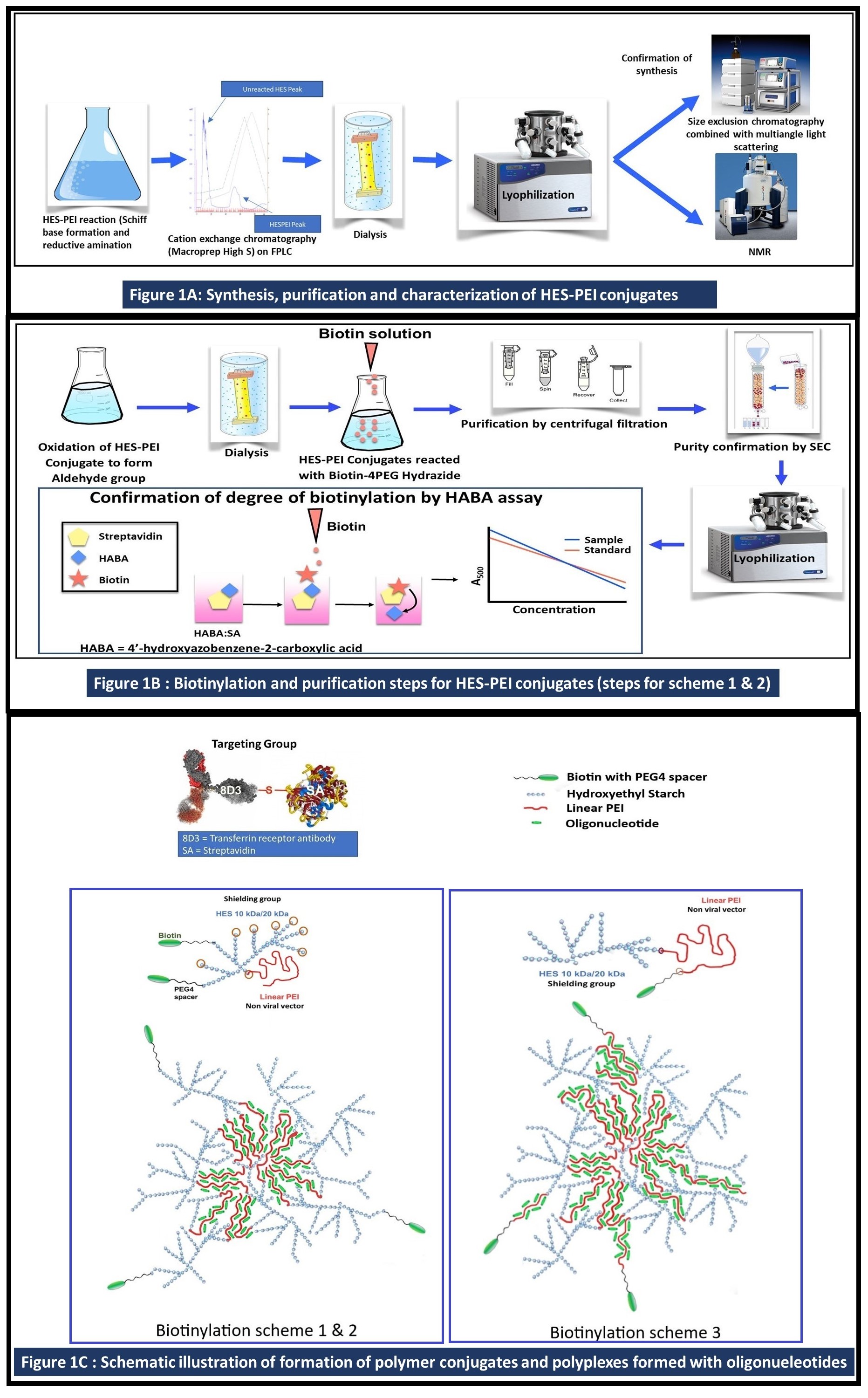 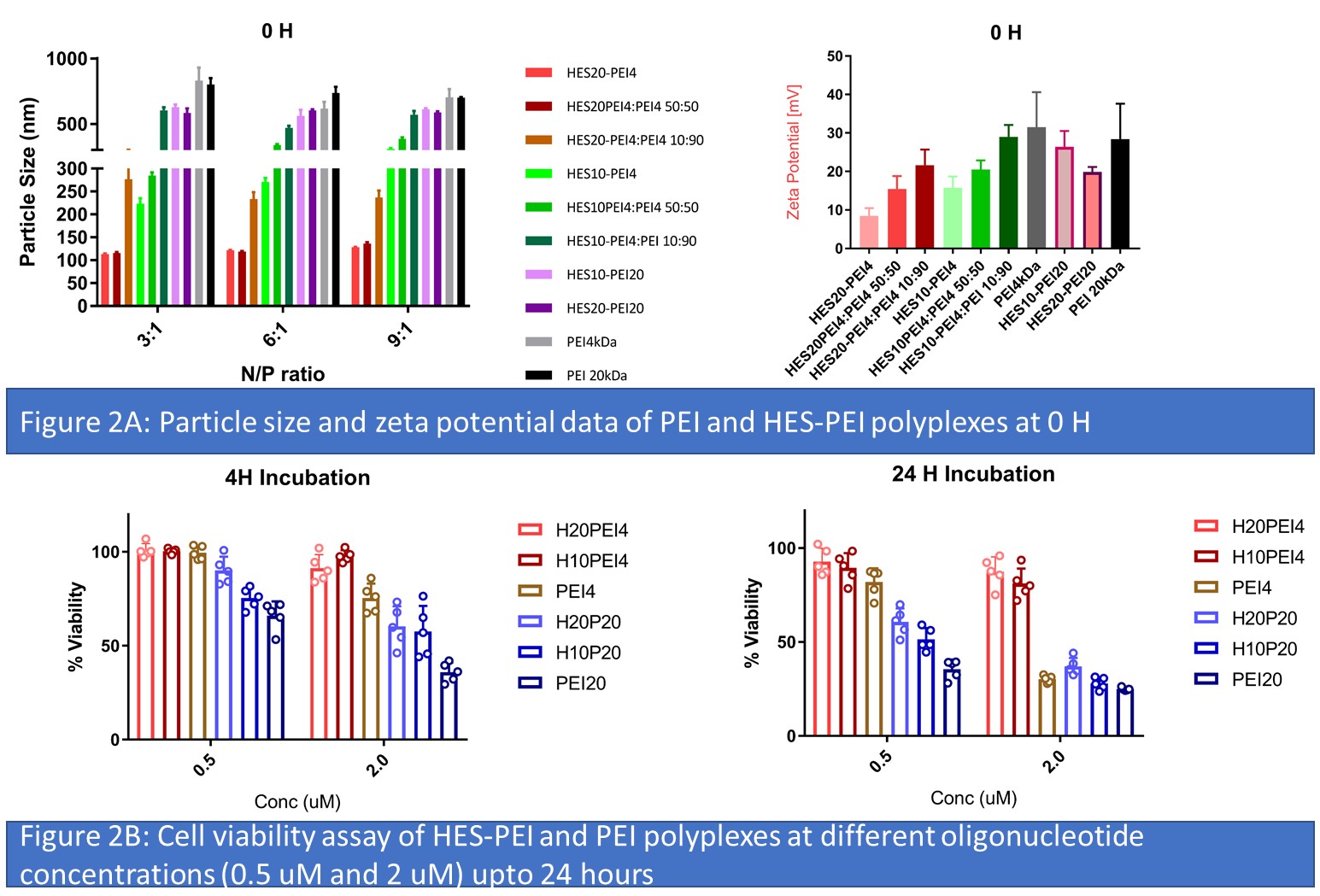 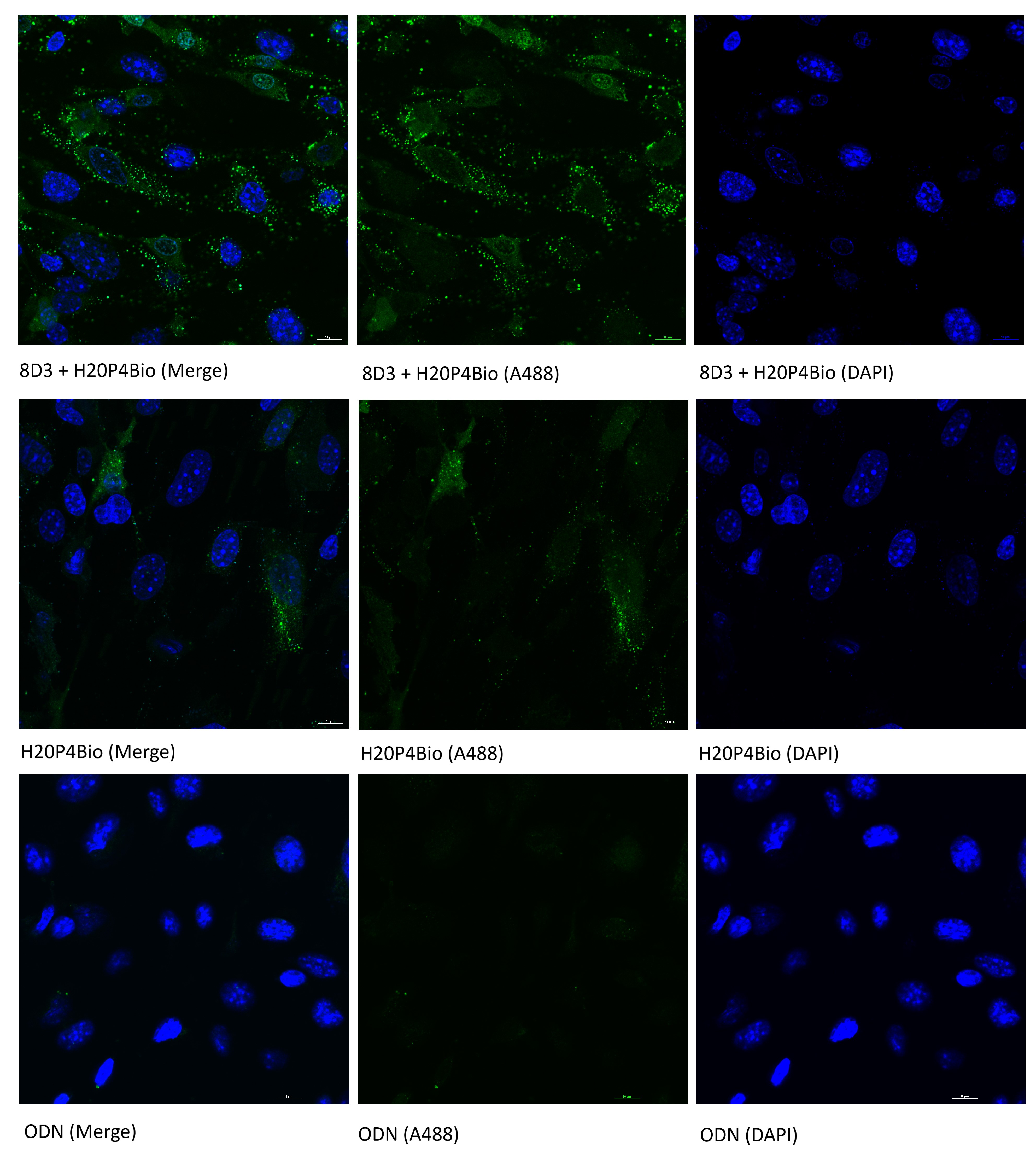